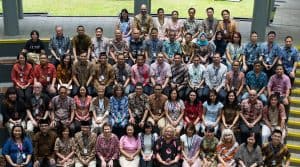 Batik is a fabric that is painted using canting and liquid wax to form of high artistic painting value on mori cloth.

The word batik comes from the Javanese word amba and tik. Both words mean writing point.

Ambatik refers to the complicated technique of painting points.

Batik technique is an ancient technique that has been used for thousands years. This technique is often found in many civilizations in the world such as in China and in Egypt. See also Importance of Indoensian Batik Making

Actually there is no definite history about batik. But the beauty of this batik has been attractived since 2000 years ago in the Middle East, Central Asia, and India.

In ancient Egyptian civilization, batik techniques were used to wrap mummies with linen cloth.  Linen fabric is coated with wax, then scratched with sharp objects such as needles or knives to carve the motive.

Javanese women in the past made their skills in batik as a livelihood. So in the past batik work is exclusively female work. Until finally found “Batik Cap” which allows men into this field.

There are some exceptions to this phenomenon, namely coastal batik that has a masculine line as can be seen in the “Mega Overcast” style. In some coastal areas batik work is common for men.

Batik tradition was originally a hereditary tradition. Sometimes a motif can be identified as coming from a particular family batik.

Some batik may indicate the status of a person. Even today, some traditional batik motifs are only used by the royal family of Yogyakarta and Surakarta.

Batik is an ancestral heritage of Indonesia (Java) which until now still exist. Batik was also first introduced to the world by President Soeharto, who at the time was wearing batik at the UN Conference. Read also The History of Batik Yogyakarta

Batik is an international recognition of Indonesian culture. You may read also Types of Batik Printing in Indonesia

History of Batik Day in Indonesia

In the world, batik was first introduced by President Suharto, while attending a UN conference. Nevertheless, the recognition of batik as Indonesia’s cultural heritage by the world, not necessarily obtained.

Batik was almost abandoned by the community, including the younger generation. Until finally, batik almost claimed by Malaysia.

Because of that, Indonesians become aware that batik is an ancestral heritage that must be preserved. To faced the problem, Indonesian government began to register batik to UNESCO. See also Types of Batik Techniques

In 2008, the government enlisted batik into the list of Warisan Kemanusiaan for Oral and Nonbendawi Culture of UNESCO.

Batik successfully recognized internationally as an indigenous cultural heritage of Indonesia, under the government of Susilo Bambang Yudhoyono (SBY).

How to Celebrate Batik Day in Indonesia

To celebrate National Batik Day, usually all workers in Indonesia wear batik. From government employees to private workers, will wear batik during work. Even many school students are required to use batik on October 2nd.

In addition to batik uniforms, there are some events about batik usually held in shopping centers. Such as bazaar, fashion show, and so on.

Batik traders will hold a bazaar to offer batik with the latest patterns. This is one of the arena to promote and nationalize batik in Indonesian society.

Batik is The Part of The World

Currently, batik has become part of everyday life of Indonesian society. The model has also varied and follows the fashion trends of the present.

If the first color of batik is only synonymous with brown and black, then now various combinations of other colors. Such as purple, red, green to yellow, can easily be found.

Reported from the UNESCO website, techniques, symbolism, and related culture of batik is considered inherent with the culture of Indonesia.

In fact, UNESCO considered the Indonesian people to interpret batik from the procession of birth to death. Batik is also a reflection of cultural diversity in Indonesia, which is seen from a number of motives. You may see also The History of Batik in Indonesia

Arab influences in ornamental motifs commonly encountered in the art of calligraphy. European influence in the form of flower motifs.

Chinese influences in phoenix motifs (birds of fire), to the influence of India and Persia in the peacock motif. UNESCO recognizes batik as a world heritage because it meets the criteria, among others, rich with symbols and meaning philosophy of life of the people of Indonesia.

Batik is one of the 10 indigenous cultures owned by the Indonesian people. Meanwhile, batik motif that existed at that time is not a motive known as today, but a simple ornamental pattern. The tradition has also been encountered in Toraja, Flores, Halmahera, and Papua, a region that is minimally influenced by Hinduism or Buddhism from India.

However, batik previously also been developed in India, especially the coast of Coromandel. From India through trade routes, batik was brought to Indonesia.

Therefore, the Indian influence was also seen dominant in Indonesian batik motifs, especially those originating from Java. Motifs and decorations are also commonly seen in various reliefs in Java.

The influence of China in batik art entered around the 7th century and the 8th century. Intense relationships between the kingdoms in Java with China also introduced batik motifs that exist in ceramics from the Tang dynasty.

Currently, the use of batik is no longer synonymous with traditional events or cultural activities. Batik motif has also been used as one of the fashion styles, both for formal or informal events.