Home » Socio Cultural » 15 Social Culture In Bali You Must Experience 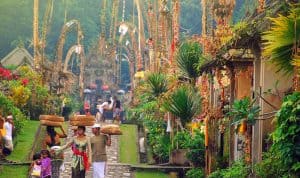 The life of people in Bali and its culture is closely related to Hinduism.

The Hindu religion that developed in Bali has been mixed with the original cultural elements.

One of the most obvious examples can be seen is that the supreme god of Hindu-Buddhism is not Shiva, but Sang Hyang Widhi is equal to Sang Hyang Wenang in Java.

Customs and culture in Bali are closely related to the religion and religious life of its people. These customs and cultures have very long historical roots that reflect an expressive configuration with the dominant religious value of Hinduism. These configurations include religion, living patterns, settlement patterns, community institutions, and art in Balinese society.

Most of the people in Bali adheres to Hinduism which has a basic framework covering three things, namely tatwa (philosophy), ethics, and ceremonies. Hindu religion is based on the holy book of Wedha, which is collected in four samhita, Reg Wedha Samhita, Sama Wedha Samhita, Yayur Wedha Samhita, and Atharwa Wedha Samhita.

To find examples of social culture in Bali, let’s look at the following:

The fact of social culture in Bali is the lifestyle of the Hindu community in Bali is heavily tied to the aspects of life, which are required to worship or worship at a particular temple, are obliged to a common shelter within the community, in the possession of agricultural land is required in a particular subak, required in social status by color , on kinship bonds are required according to the patrilineal principle, are required to be members of a certain sekeha, and are obliged in a single administrative unit of a certain service village.

In the concentric pattern of Desa Adat becomes the central point, whereas in the pattern of dispersing the village is divided into one smaller territory called Banjar.

Village concept has an understanding on Indigenous Villages and Village Dinas, Adat Village is a unity of indigenous community relations in the area of Bali which has a unity of tradition and karma association of Hindu society life hereditary down in the bondage of Kahyangan Tiga that has a certain region and its own property and is entitled to take care of his own household.

The basic foundation of Desa Adat should be based on Tri Hita Karana’s conception (Tri Hita Karana) which is a conception that integrates harmoniously the three components of the welfare and happiness of life that every Balinese person believes.

The area of Bali is very rich in the arts, all branches of art grow and develop in the life of the community which includes art, performing arts, and sound art. Art includes a branch consisting of sculpture, painting, and ornamental art.

The sculpture of Balinese society has undergone a long development, ie, megalithic sculptures originating from pre-Hindu times, which are seen as human connections with ancestors and natural forces.

The statues of gods deemed to be human media with these gods and types are Hindu-Buddhist influences, statues of the characters from the Mahabharata and Ramayana stories, relief forms inscribed on the door and house poles, and the sculptures are shaped naturalist.

Social culture in Bali is the event aims to prepare the bride from the life of a teenager into a wife and housewife asks a blessing to God Almighty to be willing to reduce happiness to this couple and later they are given a gift of good descent. By wearing the greatness of the bride, they perform Mewidhi Widana ceremony led by a Sulingguh or Ida Peranda.

This event is a refinement of indigenous marriage wedding to improve the bridal self-cleaning that has been done on previous occasions. Furthermore, both of them go to worship that is a place of worship to pray for permission and blessing of power. The event was led by a stakeholder.

In the field of art is not merely rotate around the satisfaction of making offerings. Certainly, art and craft become an applied art that finally needed by society and also by tourists as a souvenir. Woven crafts, carvings, and sculptures increasingly become a necessity in the daily Hindu community in Bali.

Dufang location, bokor, pottery, and also various other ceremonial equipment now become lading livelihood for some people of Bali. On the other hand, the creation and development of these arts goods are very attractive to tourists who come to Bali.

A craft of gold, silver, sculpture, and wood carving even long been able to penetrate the international market. With a touch of artistic Bali, various types of art goods and handicraft items are able to provide opportunities to improve the economy of the people of Bali.

Balinese traditional dress every gender is different between men and women. And also the appeal of traditional clothing is very interesting and classic, reflecting the culture of Bali and also the social life of the community there.

Each outfit does have different castings and motifs but the type used is clothing whose terms will be simplicity and beautiful to wear. It is therefore not surprising that Balinese women and men often wear their tradition’s clothing to this day.

Bali comes from the word “Bal” in Sanskrit meaning “strength” and “Bali” means “sacrifice” which means that we do not forget our strength, so we are always ready to sacrifice. The Balinese language is an Austronesian language from the Sundik branch and more specifically from the Bali-Sasak subsidiary.

This language is mainly spoken on the island of Bali, the western island of Lombok, and slightly on the eastern tip of Java island. In Bali itself the Balinese language has a level of use, for example, there is called Bali Alus, Bali Madya, and Bali Rough.

The subtle is used for formal speaking, for example in meetings at a traditional village level, promoting women, or between lower-caste and higher-caste people.

Customary law prevailing in Bali is still very strong and also tight. The sanctions imposed on those who violate will be subject to customary rules and laws.

Not just any customary person or leader implies punishment by knowing the violation committed against the environment and that the surrounding person has a serious and dangerous impact or not.

Therefore if you visit Bali should find out about the habits that should not be done and what things should be avoided.

Next social culture in Bali is religious ceremonies that are known to be very unique and also interesting. One example during the ceremony of the great day and death, in Bali is very honor and glorify with respect to the gods.

This big ceremony costs a lot, not to mention the many people involved in the ceremony. However, since it is a hereditary custom it becomes a tradition and must be run.

In addition to the above, there are still some examples of social culture in Bali that you should know, such as:

So the explanation of 15 social culture in Bali, may be useful and until re-encounter in the next article.

The Monitored Mountains of How Many Volcanoes in Indonesia are Active