Home » Food and Beverage » The History of Indonesian Rendang 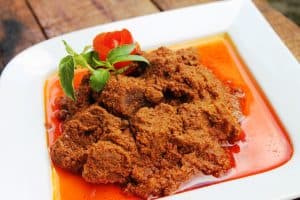 Rendang is one of the typical Indonesian food that became one of the best food in the world. In Indonesia it is easy to find rendering, every Muslim feast throughout Indonesia must present this one meal, and in every restaurant Padang this menu becomes the main menu that is always in search.

Rendang (Minang language: Randang) is also one of the traditional Minangkabau cuisine that uses coconut and meat as the main ingredient with rich spice ingredients. This spicy cuisine is popular among all the people, and can be found throughout Padang’s Restaurant in Indonesia, Malaysia, or in other countries. This cuisine is sometimes better known as Rendang Padang, whereas rendang is typical Minang cuisine in general.

Rendang comes from the area of West Sumatra, which is capital of Padang, this food became an icon of the Minangkabau community because Minang people are the first to create the most delicious food in the world, Rendang has existed since ancient times precisely in mid-16th century around 1550, believed Rendang already exist since the Minang community held their first traditional ceremony.

This food began to spread to various corners of the country and abroad as the Merantau tradition of Minangkabau people spread, the spread of Rendang began spreading to the Malay region, starting from Minang overseas to North Sumatera, Aceh, Riau, Jambi, Palembang to our neighbor country Malaysia and after that began to spread to all corners of the archipelago to the Foreign Affairs.

There are several Literatures in the 19th Century that discuss a little about Rendang, in that time Minang people often travel (Merantau) to the Straits of Malacca and Singapore, the journey needed to reach the goal can take about a month, at that time along travel there is no settlement or settlement, and to fill the provisions of Minang people bring Rendang for supplies due to this one durable food. And based on folklore Minang believed in the 16th century when they want to open a new village this food is one solution Minang society as a provision of travel because of its durable food this one.

This culinary was born not solely because of the shrewdness of the Minang community, indirectly this culinary is created because there are merchants from abroad who sell special spices to make Rendang, like traders from Gujarat India who sell some spices needed to make Rendang at that time.

In ancient times Rendang only served for special events Minangkabau Adat only, for example the traditional ceremony of Minang Kenduri people special ceremonies to welcome the guest of honor, after that Rendang start presented for the occasion of Khitanan, Birthday, Wedding, Barzanji and the big day of Islam like day Eid al-Adha and Idul Fitri.

For Minang Rendang people have a cultural significance, has its own meaning for the Minangkabau mkna community of Rendang is Deliberation and Mufakat consisting of 4 staples that symbolize the integrity of the Minang community Namely:

Rendang increasingly famous name and highly acclaimed world as one of the world’s most delicious food, no responsibility to survey Rendang became one of the best food in the world is CNN, and in 1987 one fast food restaurant diamerika Burger King ever made Rendang Burger menu as a menu in the restaurant.

Rendang phenomenon is very remarkable also made two neighboring countries and still the same same Rumpun Melayu had Bersitegang, Malaysia claims that Rendang is a typical food from the neighbor country, the people of Indonesia had inflamed and there was a fierce debate in various media. Even UNESCO listed Rendang as Traditional Minangkabau traditional food in 2010 with registration number 776 .

There are two kinds of rendang: Wet Rendang or Kalio and Dry Rendang. Wet Rendang which is cooked in a short time and the coconut milk is not so perfect, this one type of durability not so long, only about one Sunday, General found in Malaysia , Singapore, Brunei and the Netherlands, in Malaysia people call it with Rendang Kelantan and Rendang Negeri Sembilan.

Rendang Kering or dried rendang is a real rendang made by Minang society, Rendang this one require long enough cooking time until coconut milk and its shape is absorbed perfect, Rendang this one has a very long endurance, in room temperature Rendang can last until 4 Sunday or one month and if the freeze will last up to half a year.

Rendang increasingly famous and widespread far beyond its original territory thanks to the culture of wandering Minangkabau tribe. Minang people who go abroad than work as employees or trade, many of them entrepreneurial open Padang Restaurant throughout the archipelago, even extending to neighboring countries to Europe and America. It is this restaurant that introduces rendang and other Minangkabau dishes extensively.

Those are the short history of rendang, hopefully, this kind of traditional food in Indonesia would be wel preserved although it has been well known in around the world.

The Amazing History of Soekarno