All the areas in Indonesia have their own unique traditions. And in each tradition, there will be culture and art that also follow. Culture and art actually can not be divided from each other. The culture always contains an art that resembles that are very well. And in every art, there’s always a touch of culture. And that’s what we want to tell you today.

This time, we want to introduce you to the culture and art in the area of West Sumatra. That very area is famous in the eyes of Indonesian people for its capital city, Padang. The Indonesian people remember their traditional food very well, the Nasi Padang, which is considered as one of the best food in Indonesia. We also included that one in our list, but what is the other thing that West Sumatra has as a culture and art? Find the answer below :

Here we want to tell you about all the things that were born from the culture of Padang. There’s a traditional house, clothing, and the other stuff that really unique. You can see them more completely below : 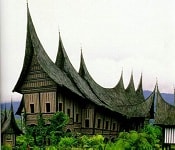 The first thing we want to dicsover is the traditional house of West Sumatra, The Gadang House.It was used as a house to the tribe of West Sumatra, the Minangkabau Tribe. The design look so great and of course ca be found in the other countries, even though in all ASEAN regions. The thing is, the house has the rectangle shape, with also some pointy roof.

These points that pointing to the sky are called Gojoang, which is consist of 4 to 7 of them and putted as a roof for the house. The meaning of the uasge of these pointy Gojoangs, is to be grateful towards The God Almighty. Also beside that interesting fact, there are also important parts of the house, the rice places. There are three of them, Si Bayo Bayo, which is the place to as the rice supply saver. Also, there’s SI Tinjau Lauk, which is for the place for saving the rice in order to giving the rice for the poor people. And the last of them, Si Tangguang Luak, which is a place of family’s rice supply. 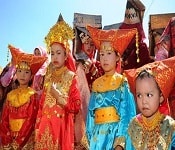 In the other hand, the female is using the hat like accesorry called Tangkuluak Tanduk, which is used on the head. Both of them use the songket, male on the waist, and the female on the shoulder. 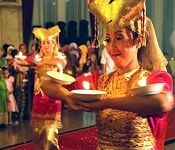 Also, we should study all the dances of West Sumatra. And for your information, they all are very interesting and also exclusive. Like this one for example, the Lilin Dance or Candle Dance. Yep, the dancers will holding candles during their dances. They can hold at least three of them, imagine that. The dance is also very attarctive with the girls dancing it. Based on the fact, this dance was used in The Palaces and also usually held furing night time.

Also, even though the Lilin Dance was mainly danced in some holy ceremonies, but now, it’s danced not for that purpose inly, but also for the entertainment. It’s so amusing actually, with its story of a girl looking for her wedding ring that fell somewhere, and she looking every where with the help of candles. The story of ring searching is very entertaining. 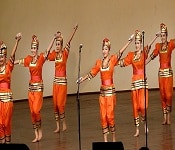 Beside that, West Sumatra also has anotehr unique dance of their own area, called Piring dance. If the Lilin use the candles, on this one the dancers will use the plates. It’s also called with the name of Piriang, by the Batak language. The dancers here also some woman that bring two plates, holding them each on their hand.

And quite to say, it’s also a very energetic show. The dance contains a lot of quick moves, with the plated being swung around in a fast speed, in order to prevent them to fall. In the old days, when people stil having their own enedemic religion, this Piring dance was danced in order to be a praying session. But now, it’s only used for entertainment. 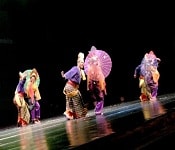 And the last of them is the Payung Dance. This dance include some of men and women into it, because the story mainly tells us about the romance of teenagers. There willbe couples of them on the stage, dancing the Payung dance with full of joy and happiness.

With its fun and cute story, this dance is really suitable for all people, even though the kids can watch this. With the story of a boy that wanted to marry the girl in order to reach their own happiness, and also the girl that accepting him, the Payung Dance will never get boring. 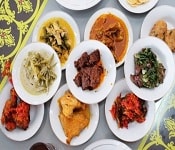 Hmm, talking about the traditional foods of West Sumatra, you can also incuded your favorites in here. But of course, we all know that the most famous yet spectacular food of them all is Nasi Padang.

Even though it’s just only a meat, some vegetables and rice, it has such a delicious taste. The key is in the spices they used, combined into one spicy yet tasteful thing. Beside the Nasi Padang, there are others waiting, like Soto Padang, Dendeng Balado, and many more. 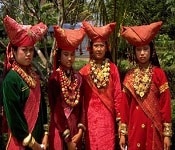 Well the tribes that can be found within the area of West Sumatra is not onlt the famous Minangkabau Tribe. Bu there are also some of the unique tribes that also worth to notice, like Jambak Tribe, and also Tanjung Tribe.

Beside the cultures, Padang area also serves us with dozens of its unique and also catchy songs and arts. Those came in different forms like song, languanges, musical instruments, and also the famous Batak dialect/accent. 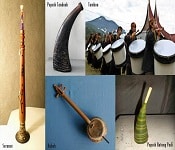 Also like the Gamelan Orchestra, West Sumatra also has its own orchestra that having some of the unique traditional instruments. In almost all the music that originated from West Sumatra, youc can find the Minangkabau nuances on them.

Well, it’s because of the tarditional instruments that used in them like Saluang, which is like flue that made if a bamboo. And then there’s longer flute called Bansi, also Talempong, which looks like Kenong in Gamelan.

The song that tells us about how beautiful our hometown is, especially if you was living in the village. Remembering the family, friends, and peaceful condition of a village.

Song that has the mean of The Long Lost Chicken. Telling us about the sad feels after losing a chicken that really valuable.

As song that has a strong means for everyone that want to go to another city or another country looking for a fortune, this one really clicked well. The song tells them about the hard life they will taste, and a message to keep being strong. 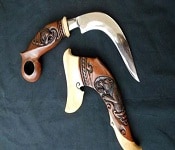 West Sumatra also has some interesting collections of weaponry, and some of them also used in certain Indonesian movies, like The Raid 2 and Merantau. The one that used in that movie (The Raid 2), was wear by the antagonist, called Kerambit.

Unlike the other forms of knive, Kerambit use a curve shape, resembling the claw of a tiger. It’s also designed to be small for the mobility reason. Also, beside Kerambit, there are also some of the traditional weapons, like Karih, Ruduih.

This accent is one of the most noticable accent in Indonesia. Usually, the Batak accent in some certain movies resemblin a character, mostly businessman, that usually has a rich economic level. This one is also the mots funniest one of them all.

So those are the things that can be said as the culture and the art of West Sumatra, especially for the city of Padang. There are 14 in total, covering different kinds of uniqut things to be discover. And those rich culture only included in one area. It’s only one, that has thousand beautiful things to discover. That’s a fact that tells you, if you taking a cultural journey in Indonesia, you’ll be needing some long years to finally be able to try all the cultures in Indonesia. So it’s good to at least try the things in this West Sumatra, because all of them are good.