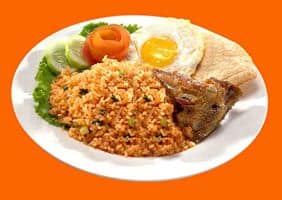 Fried rice is one of the foods that can not be separated from the culinary habits of Indonesian society. Culinary this one is really idolized and already famous to all corners of the country and even the world. On various occasions, fried rice is always a suitable food to serve.

It is also a food of rice that stirred in cooking oil or margarine, usually plus sweet soy sauce, onion, garlic, tamarind, pepper and other spices, such as eggs, chicken, and crackers. There are also other types of fried rice made with salted fish that is also popular throughout Indonesia.

Fried rice has become part of the long history of the culinary culture of the archipelago. Its popularity makes fried rice as synonymous with Indonesia. So it’s not unusual for many of us to think fried rice is the legacy of our ancestors. In fact, if we trace the history of fried rice, then we must walk back to the year 4000 BC.

The fried rice is said to have been born from the customs of the traditional Chinese community who do not like to dispose of leftover food. They will re-process the food so deliciously consumed. In addition, they are also known by the habit of eating warm food. This is the reason behind the idea of heating rice along with a number of spices. This is later on we are familiar with the name of fried rice.

The history of fried rice is known throughout the world, especially throughout Asia is also not separated from the character of Chinese people who love to trade and settle in various regions. Then slowly, there was acculturation of culture in a new place where the Chinese people settled.

Acculturation is then influenced the uniqueness of how to cook different fried rice in each region. Thus, do not be surprised if Japanese fried rice has a different taste with hongkong fried rice. The fried rice in Indonesia, if tasted, has a flavor with Thai fried rice. Nevertheless, there remains a striking difference between the two.

In the 10th century, Chinese people began to enter Indonesia. Then they are scattered in various islands. In the place they live, made fried rice. But different, fried rice is tailored to the material contained in the place. Hence there is seafood fried rice for people beach area and vegetable fried rice for mountain communities.

After the immigrants come to the Indonesian territory for their intentions of trading, they brought the culture of fried rice to this area. Then it came the new fried rice with a different taste from the original. This happens because of the differences in the spices used. The history of Fried Rice itself comes from Chinese / Chinese Chinese culture, which is not like cold food and does not like to throw away the remaining food. Next the cold rice is left in the fry to make it warm and can be eaten again.

Talking about the history of fried rice in Indonesia, there is a story that also developed and dbanyak trusted by people. Reportedly, the first Dutch women who live in Indonesia like to find other variants in eating rice. Then they experimented with various spices that are easily found in the archipelago.

As a result, they managed to create a new food that we now know by the name of fried rice. Although this story is a bit weird, but still widely believed that Indonesia fried rice is one version of the early history of fried rice found. Finally, whatever and however the story of the birth of fried rice, this one food must have been one of the culinary prides of Indonesia.

Indonesia has many variations of fried rice flavor, depending on the seasoning and mixture. Here are some fried rice is quite famous and certainly has a very good taste.

Those are the long history of fried rice. It should be a pride for Indonesians that our fried rice is included the top 50 delicious foods in the world. Hopefully, there will be more foods of Indonesia that would enter the list.

Read also: Reasons Why You Should Visit Indonesia