12 Most Visited Historical Tourism in Indonesia

Indonesia is famous for its great natural tourism potential. Many domestic and international tourists are busy visiting our country because of this. But, Indonesia also has the potential in the field of historical tourism worthy of your next destination. By visiting these places, you can learn various kinds of history in Indonesia. You will also know more things that you have never known before. That is why, we write down here to present historical tourism in Indonesia you need to visit someday. 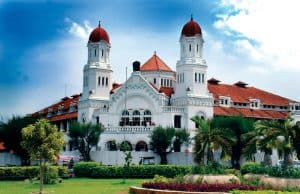 As the capital of Central Java, Semarang has a charm to attract both local and foreign tourists. Beside its distinctive Presto Bandeng, one of the attractions that become a magnet for tourists is Lawang Sewu. This Dutch heritage building is able to provide its own attraction for tourists who visit. Most people know Lawang Sewu because of the mystical stories that exist here, but besides this historical building also offers a story about the history of the train in Indonesia. Because long time ago Lawang Sewu was an Indonesian railway center.

It is called Lawang Sewu because this building has many doors. Lawang means door, and sewu means one thousand. In fact, the original number of doors does not reach a thousand, but only 342 pieces. This classic architectural splendor has its own sensation, especially when the night. Although at night, visitors are very crowded. Walkway sidewalks are still filled with visitors who sit back or just take pictures. Entering the building, the lights shone in the darkness of the night. 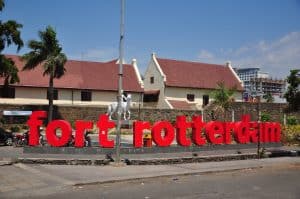 For local and foreign tourists who vacation in Daeng City, Makassar, do not miss to visit Fort Rotterdam. Fortress relics of the Kingdom of Gowa – Tallo is located right on Jalan Penghibur, not far from the tourist sites of Losari Beach Makassar.

The building, also called Benteng Jumpandang, was built in 1545 by the 9th King of Gowa, I Manrigau Daeng Bonto Karaeng Lakiung Tumapa ‘risi’ Kallonna. Initially, the Kingdom of Gowa-Tallo has 17 forts, but Benteng Jumpandang is the most magnificent. Inside the curved and sturdy walled custody room there was prayer equipment, the Koran, and the bed Diponegoro used while in custody. However, all tourists are forbidden to enter into the detention room. They are only allowed to peer from the windows of the building’s windshield. 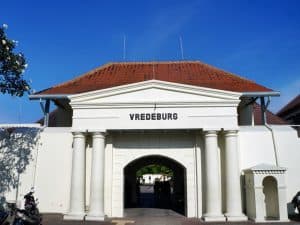 Vredeburg Fort is a fortress which was originally a military army of Dutch government troops. Vredeburg Fort was built by the VOC in 1765 during the Dutch colonial period. Vreburg Fort is located in front of the building Gedung Agung Yogyakarta, precisely at the southern end of Malioboro Street. This time the author will share information about historic tourist experience in the city of Yogyakarta.

Fort Vredeburg stores various collections such as diorama of struggles and historical objects and photographs and paintings of national struggles when pioneering, achieving and defending independence, and in filling Indonesian independence. Vredeburg Fort was built to withstand attacks from the Yogyakarta Palace. With the moat that surrounds the fortress vredeburg yag this rectangular has a watch tower in all four corners and a stronghold that allows the Dutch troops to walk around in case of shooting and firing if necessary. 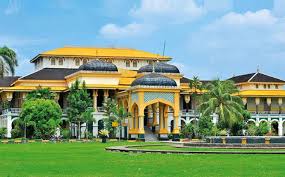 Maimun Palace in Medan is written as one of the most beautiful palaces in Indonesia. His address is on Jalan Brigjen Katamso, Kelurahan Sukaraja, Medan. Maimun Palace has a unique architecture with a combination of elements of Malay culture in the style of Islam (Middle East), Spain, India and Italy. Maimun Palace is a relic of the Kingdom of Deli. It was founded by Sultan Maimun Al Rasyid Perkasa Alamsyah who is the descendant of the ninth king of Deli Sultanate.

The yellow color that dominates the Maimun Palace symbolizes the color of Malay, as well as the greatness of the Kingdom of Deli in North Sumatra. While the influence of Europe seen from the ornament of lights, chairs, tables, cabinets, until the door push. One again, the shape of the doors and windows are as wide as the buildings in Europe. The influence of Islam can be seen from the form of arch (arcade) in the roof that looks like a boat upside down (arch of persia) which is usually found in buildings in the East Tenggah. Until now, Maimun Palace is still well maintained. 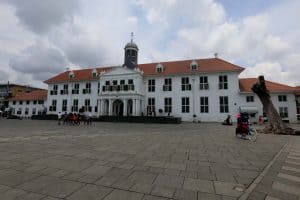 Despite being in the middle of the hustle and bustle of the metropolis, this place is still thick will nuance Jakarta past. This area is always crowded with tourists every day, be it local and foreign tourists. In the beginning, the Kota Tua was built by the Dutch colonials as the center of commerce in Asia. The city of Jakarta, then known as Batavia, became the center of trade from and abroad through the cruise line.

Located in Jakarta, there are several places to visit such as Fatahillah museum, Sunda Kelapa harbor, Bank Indonesia Museum, art museum and ceramics, red shop, and many snacks there. There is a lot of history in it. Fatahillah museum also keeps all of the old-fashioned relics. In this are you can also find the Port of Sunda Kelapa which connects Indonesia with parties outside or outside the country. 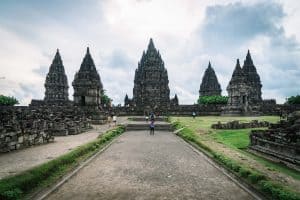 When the holiday arrives, the number of tourists who come and enjoy the majesty of Prambanan history can reach 10 652 people and foreign tourists amounted to about 264 people per day. If you want to visit this sights do not bother because the location is not far adrift with the city of Yogyakarta, which is about 17 km east side of the city center and located on the main road of Jogja-Solo. So, if you are driving a motorcycle or car from the direction of Solo to Jogja or vice versa can certainly be seen directly to elokan Prambanan temple of this earth heritage.

Prambanan temple has 3 main temples inside which consist of Vishnu, Brahma and Shiwa, in accordance with the teachings of Trimurti in Hindu belief that is creating, preserving and merging nature and its contents. Brahma (Creator) is symbolized A, Vishnu (Preserver) symbols U and Shiwa (Smelters) symbol M, when the symbols of the three gods are combined it will become AUM read “OM” which is a sacred symbol of Hinduism. 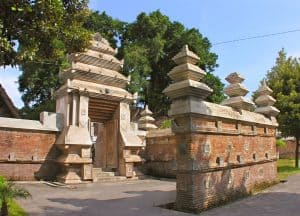 Kotagede always has stories in every corner. Not only enrich the historical horizon of the Mataram kingdom of Islam who once triumphed on the island of Java, you can also see from close to local life and the wisdom of the city of Jogja is still thick. Kotagede is a witness to the history of the founding of the Islamic Mataram kingdom that later broke into Surakarta Kasunanan and Sultanate of Yogyakarta.

Various historical relics in the form of buildings, heritage objects, arts and culture and local wisdom are still left in Kotagede. To climb the history of the greatness of the Mataram kingdom in Kotagede, we can explore the place by using the services of a local guide who is ready to give an explanation of the history of the places we visit.

You can browse the old spring baths, and the Senembati Panembahan Tomb Complex, Gedhe Mataram Mosque which is the oldest mosque in Yogyakarta. Another relic of Mataram kingdom that we can still find is the rest of Cepuri fortress located in the southwest corner and southeast. The fort was built using a large stone beam and stood as thick as 4 feet. 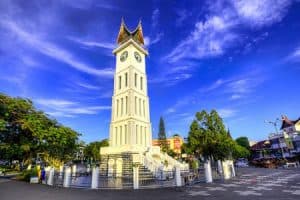 Jam Gadang is a historic building located in the downtown of Bukittinggi. It becomes a mascot or a major icon for the surrounding community. So no wonder you will be recommended to visit the Jam Gadang tourist attraction when the first time it first time to the area. Based on its history, this Gadang Jam attraction is built around the year 1826 which is intended for the secretary of Bukittinggi city named Rook Maker from the Queen of the Netherlands, Controleur. The building has a height of about 26 meters which is adorned with great wall clock views on each side. Sultan Gigi Ameh and Yasin are two architects who aim to build a gadang clock with the construction cost of about 3 thousand guilders at that time.

In this place you can enjoy the beauty of the building that berarsitek Indo mixed with the Dutch. The building located on Jalan Diponegoro Number 22 is indeed the center of attention for tourists in the country and abroad. In fact, if on the weekend this one tourist attraction is never deserted by tourists. The building which was originally called Gouvernements Bedrijven in the Dutch East Indies was designed by Ir. J. Gerber who is a renowned architect graduated from the Faculty of Engineering Delf Nederland with his team. And the building of the style of architecture of the Renaissance of Italy was completed in 1924. With the monument in the front of the building and also the historic objects in the tower, making this place worth to be a choice of historical tours. 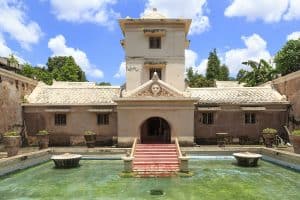 Taman Sari Jogja address located in the heart of Jogja city makes it very easy to reach by the tourists who want to visit the tourist attraction in Jogja. It is located very near the Palace of Yogyakarta, precisely located in the southwest of the Palace. The distance is only about a few hundred meters from the entrance of Yogyakarta Palace, so it is certain the visitors can find it very easily. 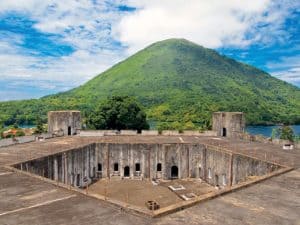 Fort Belgica became one of the historical relics of the Dutch era that is still well preserved in the Banda Neira Islands. The fort still retains its splendor with its sturdy walls and beautiful scenery. Initially this fort was built to correct the errors of the Fort Nassau building located near the beach in the Portuguese period. The castle is too low so easily attacked by enemies.
Besides enjoying the history of the old building, Fort Belgica is also a good photo-taking object. Because the fort became the tallest building so it can directly see the ocean. To enter and enjoy every corner of the building is free of charge. It’s just available donation box that can be filled with funds as you want used for care around the fort.

Tulamben was once a fishing village not so well known to people. Today, Tulamben is a highly visited as the diving destination. Since the discovery of the USS Liberty shipwreck, Tulamben has become increasingly crowded with people who want to see the splendor of the shipwreck.

The shipwreck in Tulamben has a rare combination of sites that are easy to dive and the beauty of its underwater wealth. With a depth of no more than 40 meters from the shoreline with relatively calm water conditions, making this shipwreck the safest place for wreck diving around the world. USAT Liberty is a US-owned vessel used to transport army troops, made first on Hog Island in the state of Philadelphia during World War I.

Those are the historical buildings in Indonesia that now become the tourism that many visitors come there. Almost of the place has been designed very well so the people like to visit there. You can also take some beautiful pictures while visiting them.