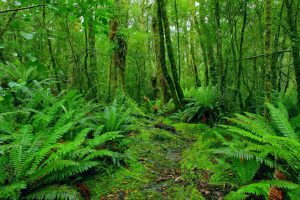 Forest is an area that is overgrown with trees and other plants. Such areas exist in large regions of the world and serve as carbon dioxide sinks, animal habitats, hydrological current modulators, soil conservationists, and are one of the most important aspects of the Earth’s biosphere.

Indonesian forests rank third as the largest forest in the world with tropical forests and donations from the Rain forests of Kalimantan and Papua. According to data from Forest Watch Indonesia (FWI), an independent Indonesian forest monitoring agency, a total of 82 hectares of Indonesia’s land area is still covered by forests. Here are the types of forest in indonesia you can see.

This forest is in an area with an altitude of 0 – 800 meters above sea level. Equatorial rain forest has trees that can reach 45 to 60 meters in height. In addition, another distinctive feature of the equatorial rainforest is that its trees are dense, have dense canopies and green pastures.

Equatorial rainforests found in sediman rock habitats in Sumatra and Kalimantan are dominated by camphor trees. Whereas in areas with sandy soil and areas with undulating topography dominated by ironwood.

Tropical forest forests can be found in the regions of Sumatra, Maluku, Papua and Sulawesi, or more precisely there are many to the east of Wallace’s imaginary line. This type of forest in Indonesia has characteristics that resemble equatorial rainforests. Only difference is that the trees in tropical rainforests are lower and canopy height ranges from 30 to 40 meters.

This type of forest in Indonesia can be found in altitude areas of 0 to 800 meters. Forests of mangosteen are overgrown with flora that resembles peat swamp forests. This forest is widely found in the Kalimantan region, such as in the Sampit where there are many agathis wood.

Another distinctive feature of this forest is the trees that can grow thick, but are not sustainable because there are some areas that are open with rock or overgrown with grass.

This means that the trees located on the ridge and lerang areas are relatively shorter and often in the form of ferns, shrubs, and dense moss. Then in an altitude of more than 1,500 meters, the existing vegetation is dominated by moss, epiphytes, ferns and orchids.

Peat swamp forests have a characteristic form of limited flora. Inside the peat swamp forest, the pephon is high, thin and not thick. The characteristic of this tree is due to its acidic habitat in the form of peat deposits with a pH of 4 which is very acidic, and the nutrient content in the soil is also low.

Sago or Metrcxylon sagu are widely distributed in freshwater swamp forest areas. The most widespread distribution of sago forests is in Papua and Maluku, especially in the Bacan, Halmahera, Aru Islands and Sulu Islands.

In addition, sago forests are also found in Sumatra and Kalimantan. Sago forests can generally grow high. However, sago forests grow into dwarfs in places with brackish water.

Mangrove forests are one type of forest that grows in tidal areas, such as in protected coastal areas, in lagoon areas and in river estuaries. These mangrove forest areas are usually in areas that are inundated and free of puddles when receding. In addition, the community grows mangrove forests that tolerate salt.

Indonesia has the largest mangrove forest in the world with an area of 4.125 million hectares. This mangrove forest is spread throughout the Indonesian archipelago, with the most ecosystems in Sumatra, Kalimantan and Papua.

Usually, the middle part of the raw material contains poor and short vegetation, such as moss, ferns, shrubs, sago, and pandanus.

This riverbank forest is also commonly referred to as riparian forest. This type of forest is in the area along the river-big river. Riverbank Forest in Kalimantan is a habitat for tengkawang trees and ironwood. In addition to Kalimantan, riverside forests are also widely found in Papua.

All in all, forest is the lungs of the world. To keep the nature balance, we should keep the ecosystem in the forest well.

History of Nursing in Indonesia

13 Most Common Food in Bali with Authentic Taste