Brief History of Puppet in Indonesia 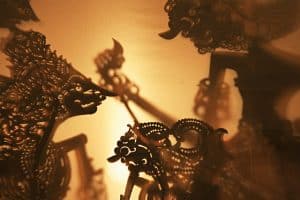 Puppet is one of Indonesian performing arts. Puppet holds a patent at the same time as batik that is dated November 7, 2003. It is granted by UNESCO to Indonesia.

Since then the world has truly acknowledged that puppet originated from Indonesia. This performing arts are not only preferred in Java, but even around the world.

How history of puppet in Indonesia? See also History of Bali Dance.

The origins and development of puppet are not accurately recorded as history. Puppet is familiar with the community from the past until now. This is because puppet is one of the efforts of the Indonesian mind. Puppet appears as a traditional cultural art, and is the culmination of regional culture.

Tracing the origin of puppet scientifically is not an easy thing. Since the Dutch colonial era until now many scholars and cultural scholars try to research and write about puppet.

However, all of these scholars clearly discussed Indonesian puppet. Its stated that puppet existed and developed since ancient times, around 1500 BC. Its long before the religions and cultures came to Indonesia. So, puppet is simplest form Indonesian native.

The process of puppet development after being enchanted with other elements, continues to advance. So that it becomes its present form and content. Certainly the development will not stop, but will continue in the future.

Puppet that we see today are different from the puppet in the past. Its possible thing that puppet in the future will change according to the times. But the change of puppet does not affect its identity.

Puppet has a solid foundation. Its main foundation is the nature of “hamot, hamong, hamemangkat which causes it to have endurance and power of puppet flower of all time. Read also History of Tea in Indonesia

Hamot is an openness to receive influence and input from within and outside. Hamong is the ability to filter the new elements according to existing puppet values. Its to be further raised into values that match puppet as a provision to move forward according to the development of society.

Hamemangkat or raised something of value into a new value. This is definitely not easy. Its must go through a long process that is digested carefully.

Puppet and puppetry has proven that ability, originated from ancient times, Hindu period, the entry of Islam, the colonial era until the era of independence, and in the national development today. Global life is also a challenge and of course the puppet will be tested for endurance in facing it.

Puppet in Animism and Dynamism Era

Periodization of the puppet development is also an interesting language. It started in ancient times when Indonesian ancestors still adhered to animism and dynamism. In this animism and dynamism, it is believed that the spirits of the dead remain alive. All things are alive and powerful.

The spirits can dwell in large woods, rocks, rivers, mountains and others. This blend of animism and dynamism puts the spirit of the ancestors who once prevailed, still having power.

They continue to be worshiped and asked for help. To worship the spirit of this ancestor, in addition to performing certain rituals they embody it in the form of images and statues of the Spirit of the revered ancestor is called “hyang” or “dahyang”.

One can relate to these hyangs for help and protection, through a medium called ‘shaman’. This ritual of ancestor worship, hyang and shaman is the origin of puppet performance. Hyang became a puppet, a ritual of trust that became the stage and the shaman became a puppeteer. While the story is about the adventure and experience of the ancestors.

The language used is the original Java language which is still used today. So, the puppet is derived from the ancestral belief ritual of the Indonesian nation around the year 1500 BC.

History of puppet in Indonesia in kingdom era began from animism and dynamism belief. Originating from an animism era, puppet continues to follow the nation’s history up to the introduction of Hinduism in Indonesia around the sixth century.

The Indonesian nation began to be full of high civilization and succeeded in building kingdoms such as Kutai, Tarumanegara, and even the great Sriwijaya. At that time the puppets were growing rapidly, got a solid foundation as a work of high quality art. You may read also History of Buddhism in Bali

The ancestors’ spiritual performances were then developed with more weighty stories, Ramayana and Mahabharata. During the X to XV centuries, puppet developed in the framework of religious ritual. Its education to the community. At this time has begun to be written various stories about puppet.

During the Kediri kingdom, Singasari and Majapahit, puppet literature reached its peak as recorded on the inscriptions in the temples. Its literary works written by Empu Spoon, Empress Sedah, Empu Panuluh, Tantular Empu and others.

The famous puppet literary works from the Hindu era include the Westayuda, Arjuna Wiwaha, Sudamala. Puppet performance is good, enriched again with the creation of a puppet show made of leather carved. Its accompanied by gamelan in a good stage with Ramayana and Mahabharata stories.

The performance achieves high artistic quality until it is portrayed “Hannonton ringgit crying esekel”, the spectacle of puppet is very touching.

The most striking difference is the philosophy that underlies the two stories. Especially after the entry of Islam. Ramayana and Mahabharata’s philosophy of Hinduism is processed in such a way that it becomes tinged with Islamic values.

Ramayana and Mahabharata from India it has become Indonesia because it is colored by the original culture and cultural values ​​that exist in the archipelago. Read also History of Tsunami in Bali

Rama & Shinta (The Entry of Islam)

The entry of Islam in Indonesia in the fifteenth century brought great changes to the lives of Indonesians. Similarly, puppet has undergone a period of renewal. Massive renewal, not only in the form and manner of puppet performances, but also the content and function.

Departing from the change of values ​​adopted, puppet at Demak Kingdom era has been adjusted with the times. Puppet shapes originally realistic are proportioned as they appear in the reliefs of the temples. In addition, there are so many upgrades in equipment.

Thats all history of puppet in Indonesia. The guardians and poets of Java hold a continuous renewal according to the times. Mainly puppet used as Islamic da’wah.

In accordance with the Islamic values ​​held, the content and function of puppet has shifted from religious ritual (Hinduism) to be a means of education, da’wah, enlightenment, and mass communication. Apparently puppet that has been updated contextually with the development of Islam and society.