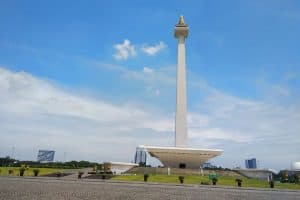 National Monument commonly called Monas is a memorial to the persistence of the Indonesian people against the cruel colonialism of the Dutch East Indies. This monument was established in the same year with the inauguration of the Indonesian Scouting movement.

The building was started on the anniversary of the Unitary State of the Republic of Indonesia (NKRI) in 1961. The building project was promoted by P.N. Adhikarya as the main contractor. While the designer architects collaborate the uniqueness of famous architects. For furthermore info, you could see the history of Indonesian National Monument.

The history of the founding of the monument began in 1949, in which the national situation began to improve. In that year the Dutch are still very eager to grip the earth again Indonesia has recognized the sovereignty of the state of Indonesia. Because it has gained that recognition, the state capital is returned to the center, Jakarta.

After hundreds of years Indonesia tried to restore its honor, now the sovereignty of Indonesia has been recognized intact in the eyes of the world. No foreign nation has the right to undermine our sovereignty. And that’s why Soekarno wanted to establish a grand and grand building that depicts the spirit of the Indonesian nation.

In the mind of the President at that time, this memorial memorial will be a reminder and encouragement for future generations. The abandoned monument should be as grand as the Eiffel Tower in Paris, France or other monuments in the capital of the then-powerful country.

To get a design that has both artistic and philosophical value, the state holds a contest. The open competition for the public then was participated by 51 participants. The national committee conducts rigorous selection for each incoming work. Selection is only leaving a work of design Frederich Silaban.

Accepted the national committee does not mean the work is directly used as a reference for the construction of the building. Apparently the reason for the acceptance of Frederich’s work is that the work becomes the only work that fits the criteria of the contest. The work of Frederich Silaban has two advantages in accordance with the request of the committee. The design can survive solidly in a matter of centuries and represent the character of the Indonesian nation.

Finally the monument construction committee again held a second contest. The contest was held in 1960. Public interest on the President’s plan was quite high. There was the increase of contest participants to 136 participants. Unfortunately the results of the assessment show no single piece of work that deserves to be a winner.

As the situation dragged on without success, the President asked Frederich to draft a new concept of phallus and yoni. The draft concept from Frederich is too big, so it can only be realized if the Indonesian economy improves. Frederich invited another architect named R.M Soedarsono as his partner to work. Both of these architects then managed to win the heart of Soekarno with the concept of the design.

The development of Monas Monument consists of several stages. President Soekarno really enthusiastically monitors the development of the monument. Monas monument is made with the concept of phallus-yoni as most buildings exist in Indonesia in the past. Linga and yoni are parts of buildings that symbolize Indonesian culture. Its existence always accompanies the past buildings built by the Maritime Empire and other powerful kingdoms in the archipelago. Then, here are the stages of establishment:

The construction of the first stage monument begins with the laying of the first concrete as the foundation of the building. The President himself did it on an area of ​​80 ha. This laying was held exactly on August 17, 1961. There were 284 concrete pegs that were planted as part of a national monument. MONAS While the pasak bumi used as the foundation of a total national history museum there are 360 ​​pieces. The completion of parts of the building is done gradually.

The next stage was delayed due to the betrayal events G30S / PKI 1965.Development continued conducted in 1969 until 1976. At this stage there is still a problem of water pooled in some points of the museum. However, in this second period Monas development can be completed. The addition of a diorama at the national history museum has also been completed in this period.

Furthermore, the monument newly opened to the public in the government of President Soeharto. Dated 12 Jul 1975 became the day of the inauguration of Monas monument by the ruler of the new order.

Last but not least, the 132-meter-high monument was finally completed on 12 July 1975 which was then officially inaugurated by the President on that day. Now Monument Monument became one of the popular tourist destinations of the capital community. It is right in the heart of the capital. Precisely it is located in Lapangan Medan Merdeka, Central Jakarta. In addition to the monument, there is also established a museum that tells the experience of Indonesia seized its sovereignty.

Those are the long history of National monument in Jakarta. You might find it is so stunning at night. The place is usually becomes the area of Car Free Day and some national events.