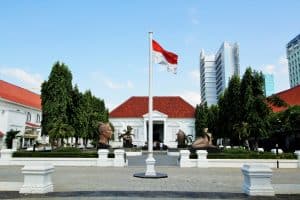 The National Gallery of Indonesia is one of the specialized museums and art activities centers aimed at protecting, developing and exploiting art collections as an educational-cultural and recreational means, as well as a medium for enhancing creativity and art appreciation.

The institute was inaugurated on May 8, 1989. Currently it is under the auspices of the Ministry of Education and Culture of the Republic of Indonesia. It is located in the center of the Capital adjacent to the National Monument, National Museum, National Library, State Palace, Istiqlal Mosque, Emmanuel Church and Gambir Train Station. More precisely, it is located at Jalan Medan Merdeka Timur no. 14 Central Jakarta. Here is the brief history of Indonesian National Gallery.

Formerly the national gallery building is located in Konengsplein Cost no. 4 is now called Jalan Medan Merdeka Timur No.14 Central Jakarta. In 1817, G.C van Rijk built an Indische Woonhuis on this lot with materials taken by Kasteel Batavia.

In 1900 the building was part of the Education Building founded by the Carpentier Alting Stitching Christian Foundation (CAS) under the Order of Van Vrijmetselaren on the initiative of the Ds minister. Albertus Samuel Carpentier Alting (1837-1935). This Dutch colonial-architectural building was used for Special Dormitory for women, as the first educational effort in the Dutch East Indies.

Historically, the building was built in 1902 by the Carpentier Alting Stiching Christian Foundation (CAS) under the Order van Vrijmetselaren, on the initiative of Reverend Albertus Samuel Carpentier. Initially, this building was used for junior high schools specifically for women, which was the first educational effort in the Dutch East Indies. As time goes by, the function, mastery and management of this Dutch-style architectural building is constantly changing. The main building is located in the middle of other buildings and is known as the CAS building (now called Building A), once functioned as a female HBS dormitory.

In 1955, the government of the Republic of Indonesia prohibited the activities of the Dutch government and society. The building and management of the educational enterprise is then transferred to the Raden Saleh Foundation which is still the successor of the CAS and remains under the Vijmetselaren Lorge movement.

Based on the decision issued by the 5th highest rule of 1962 signed by President Soekarno, the Vijmetselaren Lorge movement was banned and the Raden Saleh Foundation was dissolved. Schools and their equipment are taken over by the government of the Republic of Indonesia and submitted to the Ministry of Education and Culture.

The establishment of the National Gallery of Indonesia (GNI) is one form of efforts to build the National Art House / National Cultural Development Center which has been pioneered since the 60’s. While awaiting the realization of National Art House, Prof. Dr. Fuad Hasan (time serving as Minister of Education and Culture) initiated the renovation of the main building into Gedung Seni Rupa Depdikbud, as a means of activity and art appreciation which was inaugurated in 1987.

Through the initiative of Mrs. Prof. Edi Sedyawati (then Director General of Culture) intensively strived for the establishment of the National Gallery of Indonesia in 1995. Finally in 1998 has been approved through a letter of approval of the Coordinating Minister for Development and Utilization of the State Apparatus no. 34 / MK.WASPAN / 1998. Subsequently established through Kepmendikbud No.099a / 0/1988 and officially inaugurated on 8 May 1999 by the Minister of Education and Culture, Mr.  Yuwono Sudharsono.

The scope of the National Gallery activities is to conduct exhibitions (permanent, temporary, traveling), conduct preservation (conservation, restoration), acquisition and documentation, seminars, discussions, workshops, performance art, screening, festivals, and others who are interested in improving understanding, skill and art appreciation. The National Gallery of Indonesia also provides research services collection and guilding for students, students and the general public.

Then, the history of this international standard building was pioneered with the name of Wisma Seni Nasional or National Cultural Development Center. Then Prof. Dr. Fuad Hasan as the Minister of Education and Culture redesigned the building into the Building of Visual Arts Exhibition in 1987. While the name of the new National Gallery of Indonesia pinned in 1998 by the Coordinating Minister for Development and Utilization of State Apparatus after being championed by prof. Edi Sedyawati since 1995.

The National Gallery of Indonesia for the exhibition hall remains open every Tuesday – Sunday 9:00 – 16:00 WIB and temporary exhibition space is open daily from 10:00 to 19:00 pm. Entrance is free. GNI is located at Jalan Medan Merdeka Timur no. 14, Gambir, Central Jakarta. To reach it can use Transjakarta bus corridor 2 departments Pulogadung – Harmony down at Gambir stop.

Those are the history of National Gallery of Indonesia. For those painting lovers, sculpture or photography can visit the National Gallery of Indonesia (GNI). In this place a lot of art collections from various artists of children of the nation ranging from painting, sculpture, graphics, ceramics and many more. All the high artistic merchandise is visible to anyone, including you.