Home » History » The History of Religion in Bali – Brief Explanation

The History of Religion in Bali – Brief Explanation 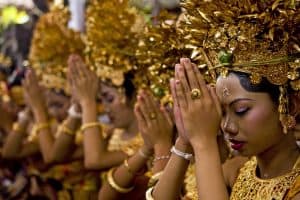 Most of the population of Bali province embraced Hindus. The next is Islam, Christianity, Catholicism and Buddhism. Hinduism is the majority in all districts and cities.

Meanwhile the great number of Islam in the province are in Denpasar, Badung, Jembrana and Buleleng.

Then, for Christian, Catholic, and Buddhist have the large populations in Denpasar and Badung. Then, when did the Balinese begin to recognize the religion? Here is the history of religion in Bali.

The originate people of Bali were Animism

Long before the formation of the Balinese people of Majapahit descent (Wong Majapahit), the Balinese people were thought to be of “Austronesian” ancestry. They have lived in groups with their respective leaders in Bali. These groups later became villages on the island of Bali; they are Balinese Aga known as Pasek Bali.

Evidence of relics from hunting and collecting simple levels of food is found in the village of Sembiran and on the east coast and southeast of Lake Batur. These relics include the ax, the handheld ax, shaved tools and others. Prehistoric heritage in Bali also continues until Perundagian, which is famous is nekara Pejeng.

The area around Lake Batur was already inhabited long before the entry of Majapahit power in Bali, and made as one of the resistance center by Bali Aga to the power of Majapahit in Bali during the reign of Sri Kresna Kapakisan. Lake Batur is one of the growing places of culture and place of Bali Aga society.

Before the influx of Hindu-Buddhism, Balinese people still embraced the beliefs of their ancestors who called Hyang. According to some opinions, the spiritual condition and beliefs of the Balinese people were “still empty”. This empty state is said to last until the beginning of the Christ, even more or less until about the first century AD.

With such Balinese circumstances, then there arrived the people from outside Bali to this island. In addition to teaching Hinduism, they also aim to promote the lives of Bali residents. For that purpose then Maharsi Markandeya came to Bali from India.

The above opinion may be erroneous, because of the remains of prehistoric objects found on the island of Bali, showing Balinese in the past has developed a complex belief system, long before the Christian calendar was known, even long before the “Hindu” and India touched Bali Island. Perhaps the meaning of the above is more refers to the not yet religious “Hindu-Bali”.

Hindus came as the first religion in Bali

Ancient Bali is a period of growth and development of Hinduism which reached the glory of the 10th century marked by the ruling king of husband and wife Dharma Udayana Varmadeva and Gunapriyadharmapatni.

During the reign of this king the Javanisation process occurred in Bali. It was where the ancient Balinese-language inscriptions replaced with Old Javanese language and Ancient Javanese Hindu literature brought from Java and developed in Bali.

This ancient Balinese period ended with the reign of the king of Astasura-ratnabhumibanten subjugated by the Majapahit expedition under the leadership of Mahapatih Gajah Mada.

In the days of ancient Bali (between the 10th and 14th centuries) the growth of Hinduism was so rapid. During the reign of the king of Dharma Udayana, a Hindu Pandita named Mpu Rajakerta served Senapati I Kuturan (sort of prime minister) who organized religious life well and inherited until now.

At that time there were 9 sects growing in Bali consisting of: Siva Siddhanta, Pasupata, Bhairava, Vaisnava, Bodha (Soghata), Brahmana, Rsi, Sora (Surya) and Ganapatya. While in some palm in Bali mentioned 6 sekta (called Sad Religion), which consisted of Sambhu, Brahma, Indra, Bayu, Visnu and Kala.

Among all the sects, apparently the most dominant and coloring life of Hinduism in Bali is Siva Siddhanta with the relics of some lontar (text), among others: Bhuvanakosa, Vrhaspatitattva, Tattvajnana, Sang Hyang Mahajnana, Chess Yuga, Vidhisastra and others.

Mudra and Kutamantra conducted by the Hindu Pandita in Bali in the ritual activities of the implementation of Pujaparikrama derived from the teachings of Siva Siddhanta.

When Bali entered the Middle Ages (14th to 19th centuries AD), under the hegemony of Majapahit, the life and traditions of Majapahit were transferred to Bali even in Nagarakrtagama mentioned “Bhumi Balya i opposite bhumi Jawa”, indicating that Majapahit influence was so dominant in Bali.

Some of Balinese started to embraces Islam, Catholics, and Christian

Just a few years later, the Balinese began embracing Islam. This start was happen when King Dalem Waturenggong came to power during the period of 1480-1550, when he visited the Majapahit Kingdom in East Java upon returning by 40 Muslim guards.

The 40 bodyguards were finally allowed to settle in Bali, without establishing their own kingdom as did the Islamic empire on the north sea of Java Island during the triumph of Majapahit.

The Muslim guards only served as servants in the Gelgel kingdom occupying a settlement and built a mosque named Gelgel Mosque, which is now the site of the oldest Muslim ibadan on the Island of the Gods.

Each of these communities takes a long time to become a unified Muslim whole. It seems that the construction of mosques since the XIV century until now experiencing acculturation with elements of traditional Balinese architecture.

Then, shortly after that, exactly March 11, 1635, came two priests from Malacca. They are Pastor Manuel Carualho S.J. and Azeuado S.J. This is the beginning of Balinese contact with Catholic missionaries. At least the invitation of King Klungkung was the first event recorded by history.

Unfortunately, there is no record of the outcomes of the two Catholic missionaries during their stay in Bali. Since then, the spread of Catholicism and Christianity in Bali has been increasingly alarmed by some percent of the population in Bali embracing Christianity and Catholicism.

Those are the history of religions in Bali. Although they live with the different religions, they could live harmoniously. They also do some acculturations between the culture and their religion. It is the evidence that Indonesia is the great country with the high level of tolerance.

15 Prohibition In Bali Island You Need to Be Aware