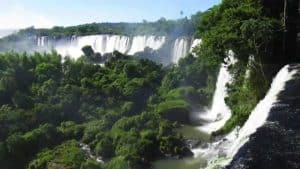 An astonishing fact today, forest encroachment is increasingly rampant and illegal logging of trees wherever the territory is in Indonesia.

One of the biggest impacts occurred in the rainforest in Sumatra, Indonesia.

It is really alarming to see that our forest condition as a protector of the city, has now begun to become extinct, it has been completely destroyed by human activities.

The question is, how long will our rainforests survive?. The Amazing facts about Indonesia Rainforest that you should know.

What about the fate of the fauna that lives and reproduces in nature like that forest?. Is this one of the important issues for the government to think about the problems of human life in the future. For this reason, this article will discuss the impact and facts about Sumatran Rainforest, in Indonesia you need to know:

As a result of the impact of illegal logging and forest encroachment for the benefit of humans, the rainforests in Sumatra began to erode.

Forests gradually become narrower and shelter for some forest species also extinct. This certainly affects the environment and nature in the future, if the conditions are not prevented or addressed properly. Hence the ecological impacts of palm oil expansion in Indonesia this will be useful or not.

2. Rainforest as a home for thousands of wildlife

The region is estimated to have more than 10,000 plant species, including 17 endemics, more than 200 mammal species, and some around 580 bird species in which more than 465 are resident types and 21 other endemic species.

In this forest area is also the home of one of the only animals in Indonesia, namely Sumatran Elephant and Orang Utan as protected and endangered animals.

3. Sumatra Rainforest as a world heritage and Indonesia

The facts about Sumatran Rainforest following the Sumatran rainforest are Indonesia’s natural heritage and also the world.

The Sumatra Rainforest Area was first established as one of the world heritage types of natural sites since 2004. But from the beginning, the region has begun to be overshadowed by problems that threaten its existence.

So it is very possible to exploit the human hand, if there is no decisive action, in the future this forest becomes a dream because it can be lost due to excessive forest pruning. The following about the disastrous effects of illegal logging in Indonesia danger and must be punished.

4. The status of the rainforest becomes in dangered status

Although it is designated as one of the world heritage sites, the problems that threaten the ecosystem inside are still very concerning.

The new Sumatra Rainforest has officially been listed in the danger since 2011 ago, it is based on reports received by UNESCO annually.

In addition, when the rainforest transfer function is still not maximized properly, there are still illegal logging that is clearly legally violated. So that the status of the rainforest is still in the danger category of extinction.

Facts about other Sumatran rainforests, namely the rainforest area is in the danger list along with 54 other heritage sites from around the world.

All of the total 33 countries that have heritage sites are in the in danger list, where Indonesia is the only one from Southeast Asia whose world heritage site is on a dangerous list. It’s amazing, isn’t it? If this condition continues then where else will the rainforest be allocated or made for human safety?. The beautiful and famous natural landmarks in Indonesia you have to know it.

6. Threats are a factor causing an extinction

There are many things that become various threats where the basis for the establishment of the Sumatra rainforest is one of the legacies that are in danger.

One of them is the presence of threats such as road construction, agricultural encroachment, illegal logging, hunting, and weak institutions from the government involved.

Excessive forest encroachment without the rule of law regulating the status of forests is threatened. This factor is a major threat to date, as well as the rapid growth of population impact on the expansion of residential areas.

7. Biodiversity is threatened with extinction

Rainforest has a function as a home for thousands of biological living there. Biodiversity that lives there is threatened with extinction if it is not immediately protected and given strict sanctions. In addition, the Sumatran rainforest plays an important role in the stability of water supply, air, ecology, and economy, as well as suppressing the effects of drought and fires.

If you cannot overcome the threat, the site is threatened to be thrown from the list of world heritage sites. The top amazing and beautiful forest in Indonesia you deserve to visit.

8. As an evolution of forest biogeography

There are many different types of endemic plants such as semar bags, the largest flower in the world Rafflesia Arnoldi, and the highest flower Amorphophallus titanum grow in this forest.

Not only that, but this forest is also one of the sources of a search for people around the forest, including the Mentawai tribe and the Anak Dalam tribe. If the rainforest is not protected properly, then all that will disappear and the natural function of the forest will not work as it should.

9. Rainforest as a balance to the world’s ecosystems

Not only is the balance of ecosystems in one country where the location of the rainforest originates, but also the tropical rainforest is a balancing ecosystem for the whole world. The benefits of tropical rainforests that are relatively very wide, ecosystems and natural habitats of various types of flora and fauna will always be well maintained.

This is very good and also very useful for the overall balance of nature on our earth. If not guarded, nature will perish and perish. This is one of the facts about Sumatran Rainforest that must be maintained. Here they are the facts about Indonesia natural resources.

10. Rainforest as the largest oxygen supplier

Rainforest is one of the biggest suppliers of oxygen benefits on this earth. Nearly 80% of the world’s oxygen supply comes from rainforest areas.

This is because rainforests have lots of trees, plants that carry out photosynthesis, so they release oxygen to the air in very large quantities.Of course, this will be very useful for human life so on, because as a living being who desperately needs oxygen to survive.

In addition to the above, the things that must be and become the facts about Sumatran Rainforest that need to be known are:

Hopefully, the explanation and examples of the facts about Sumatran Rainforest become a benefit and knowledge for all of you in keeping nature balanced and still protected, by doing small things that are more valuable.

14 Facts About The Endangered Javan Rhino

13 Things You Can Only Find in Bali