West Java has its own unique culture that is characterized by the local people. West Java custom house itself has two types of custom homes that are very popular in this country, especially West Java. In every home customary West Java has a very high philosophy value, especially in the design and blend of colors.

Traditional house of West Java has various names depending on the region of origin. In addition, the design is different from one area to another. This is influenced by the surrounding environment. Besides influenced by the local community, there is a function of the culture that is to be kept from natural disaster such as rain, wind, landslide, and extreme weather.

1. The House of Imah badak Huay 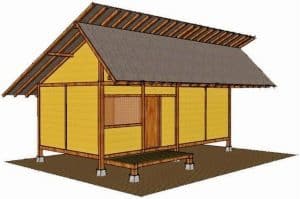 The house of Imak Badak Heuay has meaning meaning rhino that is yawning. This house has a special feature that is on the roof and design house Heuay rhino looks like a Dog Tagog home. In the suhuan or rear roof passes the edge, so if observed correctly this house is similar to the yawning rhinoceros. This house design is used in Sukabumi community area, even until now they still use as their residential house.

In a sense, the Badak Heuay in Bahasa Indonesia means the yawning Rhino. So do not be surprised if the roof of West Java custom house one has a form like a rhino that is yawning or open the mouth. This kind of house with a roof design like a rhinoceros is being evaporated consists of two parts of the roof, which is small and large. Roof that the large part is placed on the back, while the small part of the shade front of the house or terrace as a place to receive guests. 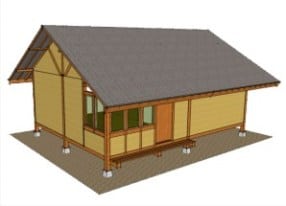 Jolopong house or Jolopong imah is the simplest form and often found in areas of Sundanese cultural preservation or even in the villages are also still many we meet. Many people who use this house Jolopong with the reason because the design is simple and also does not require much material. If we take note, this traditional house Jolopong roof shape like a saddle and elongated. The roof of Jolopong’s house is so simple without the need for complicated knick-knacks, accessories, or indentations.

Jolopong own home form has two roof areas that are united and the same length. Both areas of the roof is separated by a suhunan path in the middle of the house building. If we draw an imaginary line, then between the ends of the roof one with the other will form an equilateral triangle.

3. The house of Togog Anjing 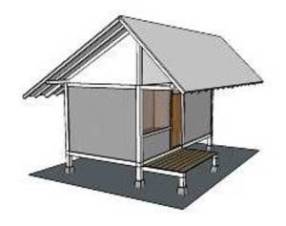  The togog anjing means the sitting dog. The design owned by this custom house resembles the shape of a dog while sitting. On the roof there are two roofs that come together in triangular shapes, and the other part of the roof connects to the front. The connected roof is usually called the term sorondoy and is generally used as a shade on the front porch.

It is a roof shape in one of the custom house of West Java is similar to the dog sitting. On the roof, there are two roofs that together and triangular, and the other roof to connect on the front. This roof connection is commonly referred to by the term sorondoy. Sorondoy is usually used as a shade on the front porch. Tagog Anjing house design is widely used by the people of Garut and is a typical local community. Some rest areas, bungalows, and hotels around the peak often use this roof design. 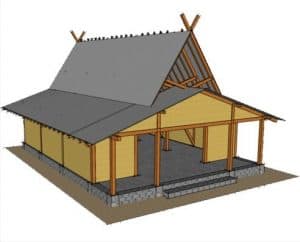 In addition, the roof section has a bird-like flap that is flapping its wings. In general, this house is equipped with a pair of scissors or claw hurang section bubungannya. Implementation is so aimed to prevent water rembesanya section of inter-roof meeting located at the top of the house. The roof of Imah Julang Ngapak house is made of palm tree, palm or alang-alang tied to bamboo roof claws. This house design is still found in Tasikmalaya area. The building of Bandung Technolgy Institution still uses this roof roofing this house. 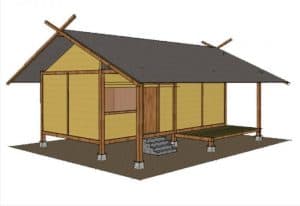 Traditional house Sunda Capit Gunting are very distinctive and identical to the design of the roof that looks like a claw on a pair of scissors. In the context of the Sundanese base, Capit is defined as something which can be clipped at the end. While the word Gunting in Sunda base is the same as scissors in the Indonesian language, it means the equipment to cut something light like cloth or paper, this tool is a kind of knife or can be called a crossed knife.

In ancient Sundanese society, Capit Gunting itself is one of the names of susuhunan or roof form of the house. The term susuhunan name is also called Undagi, where Undagi is a architecture of traditional house of West Java.

Physically, the roof shape of the traditional house clipper clippers is very distinctive, ie at the top end at the back and the top at the front of the house as a crossed shape like a scissor that is being opened. Shaped open scissors are usually using wood or bamboo.

At Parahu Kumureb or Imah Parahu Kumureb’s house, the roof design has 4 main parts. The two front and rear sections are trapezoidal, and the two halves on the right side of the left are triangular sideways.
In this form, the house has two logs connecting one end of the rod to the two corners of the house on a slope so that it forms a triangular roof area. Roof design like Parahu Kumureb is also in Palembang, but they call it with Limasan roof design.

As the name implies, the roof of a custom house of West Java this one is in shape is like a boat upside down. There is one disadvantage that is very disturbing at all if using this roof design kumureb parahu, which is easy to leak, especially if the rain arrives, this is because too many connections. But still the name of this custom house must be preserved. Until now there are still people who still use this parahu kumureb roof design that is in Ciamis Regency exactly in Kampung Kuta area.