North Sumatra is one of the provinces located in the western part of Indonesia precisely on the island of Sumatra with the capital city of Medan. Seen from its history, North Sumatra has existed since the Dutch colonial era which was then called Gouverment van Sumatra with the area covering the entire island of Sumatra and led by one local government (Governor) centered in the city of Medan. 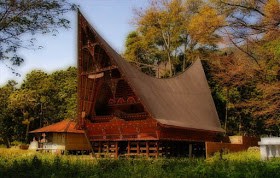 Batak Toba Traditional House usually has a typical stage-shaped with sturdy pile. To enter, you must use a ladder. Toba Batak Traditional House made of board and roofed fibers. The roof of the front is always decorated with buffalo head and on the back decorated with buffalo tail. If you are interested to see it directly you can visit Toba area especially in Samosir regency, Toba Samosir regency, Humbang Hasundutan regency and North Tapanuli regency. Toba Batak Traditional House named Jabu Bolon (Jabu: Rumah) and (Bolon: Besar).

House of stilt is generally inhabited by 4-6 families living together. If in other areas, the house on stilts deliberately made to avoid the attack of wild animals. However, the customary stage house bolon made in order to have under the house. It is used as an animal cage for the maintenance of batak people, such as pigs, chickens, and goats. 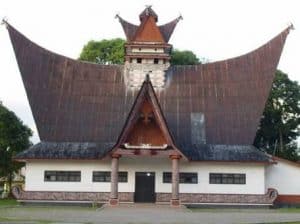 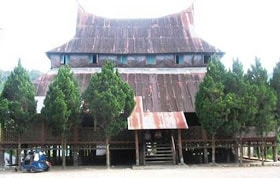 Mandailing tribe is located in the province of North Sumatra which borders directly with Riau province. Mandailing is famous for its breathtaking natural attractions and local wisdom that is so closely held by the locals. Mandailing Traditional House can be found in Mandailing Natal Regency, part of Padang Lawas District and South Tapanuli Regency. The Mandailing custom house name is named Bagas Godang. Bagas in Mandailing means house while Godang means a lot.

Mandailing Region is famous for its stunning natural attractions. And culture of local wisdom that is so closely held by the local population. Mandailing Custom House can be found in Mandailing Natal district. This regency is part of Padang Lawas and South Tapanuli Regencies. Traditional house is usually called Bagas Godang. The meaning of Bagas in mandailing means home, while godang means a lot.

4. The traditional house of Nias 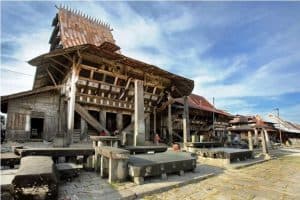 Nias is a tribe that lives in Nias Islands. Nias is famous as the best marine tourism destination in North Sumatra. As one of the tourism icon, Nias has been visited by many tourists because of its beauty, not only that, Nias megalithic culture is estimated to be the oldest in Indonesia. The traditional houses of Nias Utara, South Nias and Nias Barat are almost the same, except for different roofs. The name of Nias custom house is Omo Sebua.

The Nias customary house is named after Omo Hada, this traditional house form is the traditional stage of Nias people. In addition, there are also custom house nias with different designs, namely Omo Sebua. Omo Sebua is the home of the chiefs of the country (Tuhenori), the village chief (Salawa), or the nobility. This traditional house is built on high and large nibung wooden poles, and Rumbia. The shape of the floor plan is rounded telu, this is in North Nias, East and West areas. 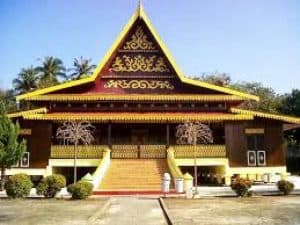 Malay tribe is located in Medan City, Deli Serdang Regency, Langkat Regency, Batubara Regency, Serdang Bedagai Regency and Labuhan Regency, Malay tribe has great role in Medan development as the third largest city in Indonesia. Rumah Adat Melayu Deli is identical with the use of yellow and green. The walls and floors are made of boards while the roof uses Ijuk. Malay Custom House Deli has a unique design. If you want to see directly, you can visit the Tembung area.

Malay custom can be found in Medan City, Deli Serdang District, Langkat Regency, Batu Bara Regency, Labuhan Regency, and Serdang Begadai Regency. The Malay people have a very important role in Medan as the third largest city in Indonesia. Rumah Adat Melayu Deli is identical with yellow and green, and the walls and floors are made of boards. While the roof using fibers. 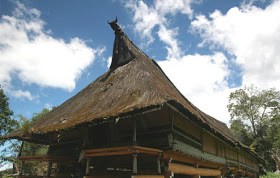 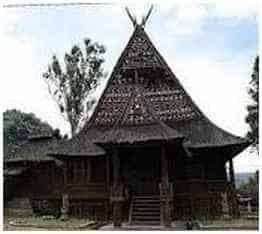 Angkola is a self-contained ethnic group, although many equate it with Mandailing. Traditional house Angkola is still called Bagas Godang, it’s just there are some differences between the two. Traditional house of Angkola uses fibers as a roof and also a board as a wall and floor. Its uniqueness lies in the dominant color used such as black and white. 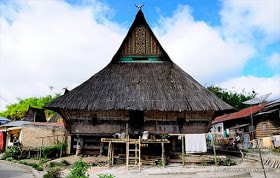 The house of karo in North Sumatra is usually referred to as a traditional house Siwaluh Jabu. Siwaluh Jabu itself has a sense or meaning of a house inhabited by eight families. Each family has its own role in the house.

This traditional house is high and one house is usually inhabited by one big family. It consists of four to eight families of batak. In the house there are no secrets or separators, so one room off. However, the division of space remains, namely the debate with strong lines of custom, although the line is not visible. Each room has a name and anyone who must inhabit the room, and has also been determined by custom.