The city of Bandung is not only famous in terms of its unique tourism industry, but Bandung City is actually an interesting place to visit for culinary diversity for you to try and savor. Below will be explained some of the most famous cuisines that you should try when you go there. 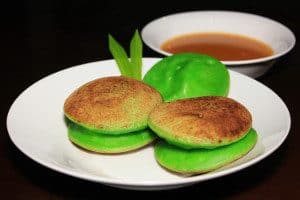 Bandung typical Surabi is made from flour that’s so similar to pancakes. The difference is that Surabi is made by burning it on the stove and the dough is very thick. The equipment to make this snack used a simple tool, such as with a furnace made of clay mold. This tool that makes Surabi food to be delicious and mouthwatering.

Moreover, many other cities also have Surabi of their own flavor but the basic flavor remained the same because the element of coconut milk mixed in the ingredients. The difference with other Surabi lies in additional ingredients or topping and the thickness level of Surabi dough. 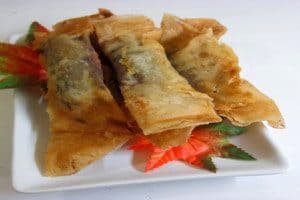 Banana is a fruit that can be processed into a variety of dishes and can grow in most parts of Indonesia,  one of which is a delicious snack called banana chocolate. Different than other bananas dishes, this one is a unique food and it’s called Bananas Chocolate because the banana is dipped in chocolate and wrapped in flour to be then fried with oil.

The taste is really delicious when eaten hot as soft chocolate will melt on your tongue then releasing heavenly flavor that will make you wanted more. You really need to try this snack when you visit Bandung 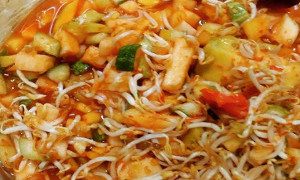 This Bandung typical food is already scattered everywhere in Indonesia as Rujak is kind of people’s food due to its spiciness that suitable for Indonesian tongue. However, this Rujak Vinegar is very different than you normally found elsewhere, as this food is a traditional food made from a mixture of various kinds of vegetables and fruit.

Meanwhile, normally Rujak is spiced with salad and added with vinegar for the enhanced aroma to taste even more delicious. 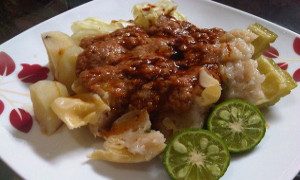 This Bandung food is easy to encounter as you can find it at school, at the roadside kiosks and many other famous restaurants. Siomay Bandung is made from fish meat, mixed with sago and added with peanut seasoning to make it even more delicious.

Meanwhile, if you visited Bandung, then you can stop by in Veteran Bandung road, and there is a very nice Siomay shop commonly named Kingsley and has become a favorite among the community there to enjoy. 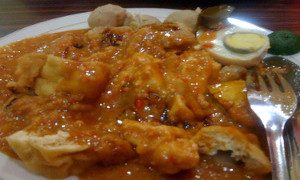 This one food is closely related to the Siomay because you can also order it together with Siomay and sometimes even mixed it. The abbreviation of the Batagor itself is Bakso Tahu Goreng (Fried tofu meatball), the uniqueness of Batagor is after it’s fried then the food color turned to brownish.

Moreover, the ingredients of making Batagor is the combination of fish meat and fried starch and added with peanut sauce and lime juice to finally add deliciousness when you consume it and also not forgetting some hard boiled egg to complement the taste. 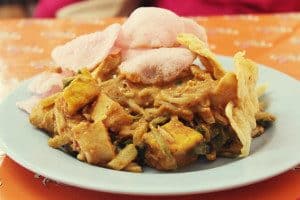 Lotek food is almost the same as the Pecel as in other cities, namely the food is in the form of fresh vegetable stew sprinkled with chili seasoning and mixed with peanut spice and added with some crackers.

Meanwhile, Lotek is offer the watery taste which you can not find in other food. The uniqueness in taste can be attributed to its sauce ingredients with combined nuts, Tempe, garlic and other spices. Generally, this food is called Lotek because it’s sweeter than Pecel. Moreover, if the chili sauce has been mixed before then it will taste even more delicious. 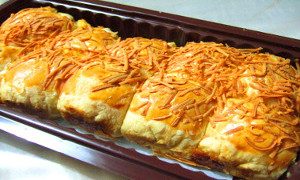 Peuyeum is one of the unique food of Bandung that is often bought by the tourists as souvenir gifts. What makes this food special is that Peuyeum is a food similar to tape, but the difference is Peuyeum is much drier, because of ways to make it are very different.

In the serving then you can try Peuyeum with cheese or chocolate topping and can try other variations of delicious seasoning. The taste of Peuyuem is soft in your mouth and can be quite filling for your stomach. 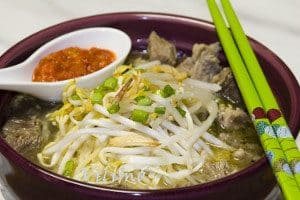 This noodles can be found by vendors who sell them using a cart on the street. This Bandung street food is processed in a way that the noodles are soft, and the dish was given a variety of vegetables such as toge and given an extra topping like a very soft cow meat that has been boiled and added some sauce to enhances the taste.

On the other hand, the reason why it called a shake noodle is that the noodles are consumed by stirring and shaking it up first before eating so that the flavor would come up from different spices and mixed all together. 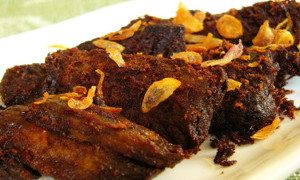 This one snack is a typical West Java food made from beef and tastes slightly sweet and tasty. The method used to make Gepuk is by slicing the meat in horizontal and boiled half cooked, then the meat is beaten with the stick until reaching the tender meat. The tender meat is then soaked in the spices mixed with coconut milk, then it’s boiled again on the stove until the coconut milk is absorbed by the meat to further enhances the taste.

In addition, this food is one of the most delicious cuisines when eaten with warm rice and spicing to increase the flavor. 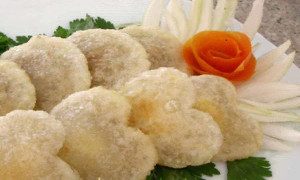 Many people are familiar with this food, as it’s the special food from Bandung and many people there like it. This one snack is very popular in Sundanese area which is sold at various form and prices with different variations.

Furthermore, for additional Cireng spices then you can add pepper, salt, soybean, green onion and cooking oil and this Cireng is delicious when eaten in warm and accompanied by a spicy sauce to enhances the taste in your tongue. 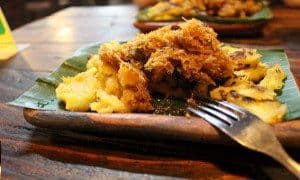 This food is also known as toasted Tapai and also the name was given to the snack made from Peuyeum (Tapai cassava) that is burned and dipped in sugar mixed with coconut grating. This food name means that when it’s dipped in the sauce then it’s even tastier to consume.

On the other hand, this very amusing name was given by the first merchant that sell Colenak in the 1930s. This one snack is a modification from Peuyeum. Colenak is a kind of like a Peuyeum that is burned on charcoal, then flushed with a thick chocolate liquid, and added with grated coconut. 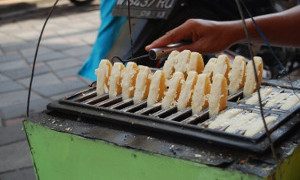 Bandros is one of the typical foods of West Java. This traditional cake is made from a mixture of rice flour, grated coconut, and coconut milk then cook it over the concave stove while being given a small amount of grated coconut to further enhances the taste. This cake is usually served with a sprinkling of sugar on top.

In addition, the shape of this cake is similar to the pie cake because it is a similar mold, which is a semicircular print. Bandros cake is usually served along with sweet tea or coffee.  It’s definitely most delicious to eat while already cooked and warm. 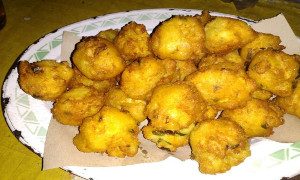 Bondon Perkedel is one of the most legendary culinary to have in nighttime at Bandung City. The basic ingredients of this snack are actually the same as the general Perkedel, namely potatoes. The difference is that Bondon Perkedel made in the traditional way of using charcoal.

Meanwhile, this food is cooked on a stove and burned using wood or charcoal. Perhaps this cooking method is the one thing that makes this cake very delicious to eat while served warm with the chili sauce that is enough to accompany your lunch as favorite dishes. 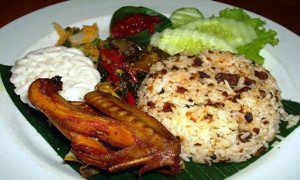 This culinary is one of the most delicious food around because the rice is processed by burning it with the added Oncom spices and given a little tapioca flour. The combination of savory taste, salty and sweetness, feel when the rice is chewed in the mouth.

Occasionally, the sponge of salty Ooncom splashes on the tongue, along with the sweetness of the rice. This delicious cuisine tastes even better when accompanied by chili sauce and crackers plus little vegetables. 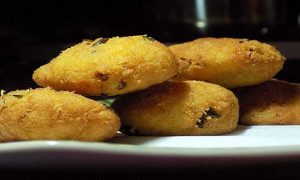 This snack is sometimes called Combro which is a typical food from West Java. Usually, combro is sold by many traders on the sides of the road. The main ingredient to make Combro is using grated cassava formed like a ball and the inside is filled with Oncom sauce, and then the food is fried. This Bandung special food is better consumed while still warm. 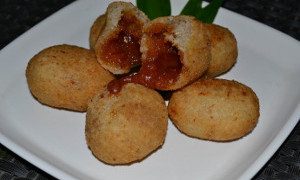 This Bandung typical food originally comes from West Java and has a round shape. The food material is from the cassava grater and the inside is given brown sugar, then the food is fried to reach better taste. It’s advised to consume the food preferably when warm and accompanied with tea or coffee to add an aftertaste. 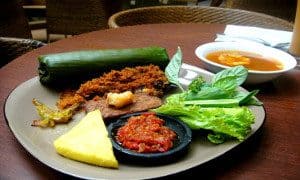 Timbel Rice is an icon of Sundanese cuisine because in the Sunda region has a lot of variations of rice Timbel itself. This rice is generally a plain white rice that’s served hot, then wrapped in banana leaves to give out a very distinctive aroma of Bandung typical food. And usually served with various additions such as tofu and fried Tempe, fried chicken, sauce and another seasoning. 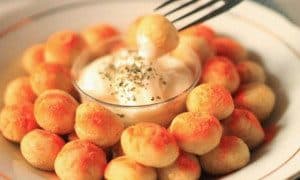 Cimol is usually sold on the roadside, this food is made of starch and molded to be small rounded-like and when fried then it’ll expand itself. To consume this Cimol then it is added seasoning to further enhances its taste. This food feels very chewy, tasty and very delicious when bitten. Especially when served hot and accompanied by a cup of tea or coffee. 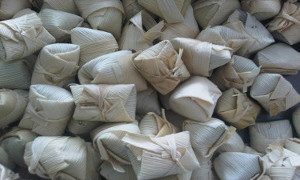 Wajit is a traditional food made from glutinous rice with sweet and legit taste. Many of us know Wajit in some areas but for the original Wajit then it’s indeed coming from Cililin Wajit.

On the other hand, Cililin Wajit is a typical food made from glutinous rice, brown sugar and coconut milk cooked into one serving. There are many kinds of Wajit, but this Cililin Wajit has its own uniqueness, which is wrapped with a shell of corn husk 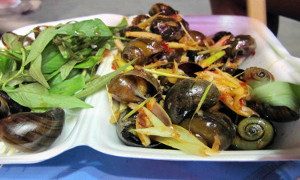 Tutut is another name for snails of rice fields. This Tutut is also a kind of snail with small and big medium size. Generally cooked with spicy seasoning and a lot of bay leaves and lemongrass to remove a fishy odor in the Tutut meat when consume. Meat Tutut is also usually processed with seasoned coconut milk and also turmeric. How to eat it this food is by sucking it and the taste of a chewy meat makes popular Tutut as local delicacies by rural communities.

The availability and the delicacy of wide-ranging foods in Bandung are the reason why people still like to go there. It creates an atmosphere that’s uniquely Bandung and in turn, will increase the culinary industry therein. As Bandung is a city that’s much focused on the home industry so there are many people that are trying to give out better food menu that’ll be suitable for every people tastes’ bud.