Home » Place » Lake » History of Toba Lake and the Legend 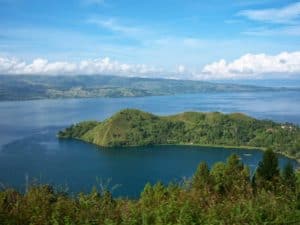 There are so many tourist attractions that can be found in Indonesia. One of them is Toba Lake. Toba Lake is a volcanic lake that is located on North Sumatra Province.

Toba Lake is named as one of the biggest lakes in South East Asia and the second largest lake in the world after Victoria Lake in Africa.

Here, We inform you about History of Toba Lake.

Meanwhile, this lake has become one of the most popular tourist attractions in Indonesia and it has been visited by many tourists, not only local tourists but also tourists from other countries outside Indonesia. Most people who live near this lake are people from Batak tribe. Most of these people work as farmer, fisherman, or merchant.

Toba Lake is known for its beauty. The air is fresh in this area and the wind will blow smoothly. The water in the lake is crystal clear with blue color that will mesmerize you. The landscape came with mountains as its background which makes the lake looks more beautiful.

On the other hand, Toba Lake is located about 900 meters above sea level. The crater that forms this lake has size about 1,145 km square while the depth of the lake is about 450 meters. In the middle of this lake, there is a small island with size that is similar to the size of Singapore. This island is called Samosir Island. On Samosir Island, there are two smaller lakes, Sidihoni Lake and Aek Natonang Lake. The location of Toba Lake is on Toba Samosir Regency, North Sumatra, Indonesia.

It is estimated that Toba Lake is formed when there is eruption about 73,000 to 75,000 years ago which is the latest eruption of supervolcano (volcano with very great size). Bill Rose and Craig Chesner from Michigan Technology University estimated that the volcanic materials that are erupted from that volcano are about 2,800 km cubic. 800 km cubic of those materials are ignimbrite rock and 2,000 km cubic of those materials are volcanic dust which is estimated blown by the wind to the west for about two weeks.

The volcanic dust that is blown by the wind is spread to the half of the world, from China to South Africa. This eruption is estimated occurred for one week and the volcanic dust is thrown up to 10 km high above sea level. This event caused mass animals death and some species are extinct due to this event. According to several DNA proofs, this eruption also reduced the population of human up to about 60% from total population of human in that period. There are about 60 millions humans that are killed due to this eruption.

This eruption also caused the ice age to occur even though some scientists are still debating this hypothesis. After that eruption, a caldera is formed and then this caldera is filled with water and became what is now known as Toba Lake. The upwards pressure that is created by magma that was not erupted cause the formation of Samosir Island.

In a press conference in Oxford, America, international multi-discipline research team that is headed by Dr. Michael Petraglia revealed that the new archaeology sites is found by geologist experts in south and north parts of India and these archaeology sites are quite spectacular.

On these sites, it’s revealed how people survived before and after the Mount Toba supervolcano eruption occurred in 74,000 years ago. The team also found the evidences about the existence of life under the pile of volcanic dust from Mount Toba. This is very interesting since the source of eruption is 3,000 miles far from the distribution of the volcanic dust.

For seven years, the experts from Oxford University investigated the ecosystem project in India in order to find the evidences of life and tools that are left on the empty field. This thousands hectare area apparently is only just a savanna with bones from animals scattered around.

On the other hand, the conjecture lead to Mount Toba since there is evidence found that the molecule of volcanic dust that are found on 2,100 spots have similar structure.

These molecules are found from caldera that now became Lake Toba to 3,000 miles from the source of eruption. The quite surprising fact is that the distribution of the volcanic dust apparently reached the North Pole.

Then, this evidence is just like reminded the experts about how powerful the Mount Toba eruption that time. The evidences that are found support the assumption that the power of the eruption and the tsunami that it’s created is the cause of the extinction of life in Atlantis.

Folklore about the Legend of Toba Lake

There is also a folklore that told as part of History of Toba Lake. Its called the legend of Toba Lake. According to this folklore, a farmer lived in Sumatra and this farmer worked very hard. This farmer lived alone and every day the farmer will work on the field and caught the fish tirelessly. All of these are done by the farmer to meet his daily needs.

One day, the farmer went to the river near where he lived. He planned to catch some fish for his meal that day. He only brought fishing hook, baits, and container for fish that he caught. He went straight to the river and after he got there, he started to fish. While waiting for fish eat the bait, that farmer prayed to God and ask for plenty of fish. A few moments after he prayed, his fishing hook moved a little bit.

The farmer pulled the fishing hook and felt happy because he caught a very big fish. After stared at the fish that he just caught for a few moments, that farmer is very surprised. The fish that he caught can speak. The fish begged the farmer not to eat her and let her live. Without wasting his time, the farmer released the fish to the water. After the fish is released to the water, the farmer became more surprised because the fish is suddenly turned into a very beautiful woman.

That woman said to the farmer not to be afraid and she will not hurt him. The farmer asked that woman who she really is and still wonder how came the fish that he caught can turn into a very beautiful woman. The woman then explained that she is a princess that is cursed because she broke the rules of the kingdom. The woman then thanked the farmer because the farmer has freed the woman from the curse.

As the reward, the woman is willing to become the farmer’s wife. However, there is a promise that needed to be kept by the farmer which is the farmer must not tell anybody that the princess was a fish. If this promise is broken, then the tremendous disaster will occur.

Then. after they’re married for a while, finally their happiness became larger because the farmer’s wife gave a birth to a boy. Their kid grew into a very handsome and strong boy. However, the boy has a habit that made everyone wonder. The boy always felt hungry and never be satisfied. All the foods that are served will be eaten by the boy without any remains.

Then, until one day, the boy is asked by his mother to bring the foods and drinks to his father who worked at the field. But the boy doesn’t finish his job. All the foods that are supposed for his father are eaten by the boy. After that, the boy felt asleep in a barn.

The farmer returned to his home because his son never arrived to the field. In his way to home, the farmer saw his son slept in a barn. The farmer woke his son and asked his son where the foods that is supposed for him. The boy said that he ate all the foods. The farmer is mad and yelled to his son that he is a son of a fish. The farmer didn’t realize that he broke the promise.

Suddenly, the boy and the farmer’s wife are disappeared and water came out rapidly from the footprint of the boy. Water kept coming out from the ground until a lake is formed. This lake is finally known as Toba Lake.

Then, those are a short explanation about Toba lake’s history and legend spread around communities.

Table Manners in Indonesia – How to Act