There have many kinds of fish that been caught in the ocean. Some of them have the strange and weird shape. In Indonesia, the discovery of mysterious animals of unknown type is often associated with mystical things. Some fish that have ever been found in Indonesia (with abnormal shape and size) usually becomes the spectacle of local residents. Not infrequently, residents cook the fish to be consumed together. Here are the lists of 8 unknown fish found in Indonesia.

A fish that looks like a monster is found in Surabaya in November 2017. The fish that is about 1 meter long is placed in a bucket. The monster-like fish is Alligator Gar. Named like that because this fish is exactly like alligator or crocodile. The shape is long, and is decorated with pointed teeth that line up neatly in its jaw. This fish comes from the Americas, this fish can also grow large and enter the type of predator fish 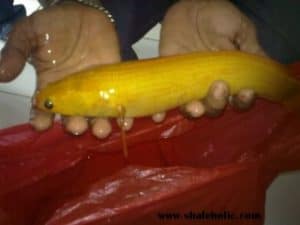 Because of finding a mysterious golden cork fish, Suriansyah, a resident of Banjarmasin, South Kalimantan, had to be willing every day his house was filled with curious citizens to see the unique fish. His golden body made some people believe that the cork was a sacred fish. Some even believe that this fish can cure various diseases.

This news also spread by word of mouth which made people from outside the village come in droves to see this mysterious fish. Not only saw, some residents even asked for this fish immersion water for health and other requests. The large number of residents who asked for water made the Surianysah residents overwhelmed, they had to provide 40 jirigen of water.

In general, do we know catfish only as big as arms? But apparently, there are also catfish that are as big as human legs. 2 giant-sized catfishes were once caught by residents of the slopes of Mount Semeru in the rice fields. Each catfish has a length of 1.25 meters and 1 meter with a weight of 10 kilograms is a residents’ threat. Beum is known what kind of catfish is found.

Zainal, a resident of Sumberurip Village, Pronojiwo Subdistrict, who first discovered two giant catfishes, recounted, the discovery of the two fishes started this morning when he left for the rice field and was suddenly startled by the appearance of the two catfishes. 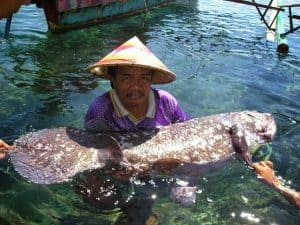 Research conducted by the Indonesian Institute of Sciences (LIPI) in collaboration with Japanese research institutions managed to find 23 ancient Coelacanth fish. The fish nicknamed “The Sea King” was first discovered by Captain Hendrick Goosen in the Indian Ocean in 1938. Because these fish have been included in the list of animals protected by the government, research is carried out in the sea.

Some countries other than Japan that have collaborated with Indonesia for the Coelacanth fish research are Germany and America. Coelacanth fish can only be found in two regions of the world, namely Africa (Comoro, Tanzania) and Indonesia (Central and North Sulawesi waters). Coelacanth is a type of ancient fish that lived since the time of the dinosaurs. In the study, ancient fish were found during three surveys conducted in the area of Central Sulawesi, North Sulawesi, Manado Beach, Biak who suddenly dismissed the news that this animal was extinct.

The next mysterious moment happened in Seram, Maluku. In 2017, residents of Hulung Hamlet, Luhu Village, West Seram, Maluku, were shocked by the wreck of a giant sea animal stranded on the beach. Some experts have finally confirmed that the 23-meter long and 6.5-meter-wide animal is a whale.

West Seram waters are known to be close to the Banda Sea – deep sea waters that are quite often found in the presence of medium to small large marine mammals. It was predicted this kind of fish is the part of Banda Sea waters.

Based on information circulating on social media and quoted from Rismon Sirait’s Facebook account that in Tao Silalahi Paropo Village on Monday 17 June 2018 around 16.30 WIB there were a number of anglers on Lake Toba getting Goldfish (Cyprinus carpio) very large with heavy color 14 kilograms.

By some people who were elder in the village of Tao Silalahi Paropo, the goldfish with a large enough size was suggested to be removed so as not to happen undesirable things. But proudly the anglers did not heed the advice of the parents there to immediately bring this goldfish to his home to be cooked and eaten. Local residents believe that the discovery of this fish resulted in the sinking of a wake-up motorboat that killed hundreds of passengers on June 18, 2018.

Jambi residents, especially Koto Petai, Kerinci Regency, have been shocked by the sighting of mysterious fish, which according to local residents may be a bad sign if they appear. The fish head is like a cow’s head. The fish can reach 4 meters.

The community around Lake Kerinci believes that these mysterious fish are supernatural beings that only appear at certain times and only selected people can watch it. His emergence is often addressed with natural phenomena such as earthquakes or volcanoes.

The discovery of strange fish stirred the residents of North Sulawesi. The animal has a shark-like tail and fin shape but with rough textured brown skin. The strange fish was found by a police officer who served in Urban Wanea police station, Manado, North Sulawesi, named Jeffry Nggala. Jefrry found the fish on Sunday morning August 7, 2016 at Kalasey Beach, Minahasa. When found, the fish is dead.

At first glance it looks like a shark, but the snout and eyelets around a meter are like dugongs. Jefrry also photographed the fish and uploaded it on his Facebook account. After research, the fish is known as a species that is rarely found. Because of its distribution to the sea in Australian and New Zealand waters.

Those are the kinds of unknown fish in Indonesia that have ever been found. If you find the unknown fish, what will you do first? It would be better you ask a scientist to do some research to get information what kind of fish that is.

15 Things You Should Never Do in Bali