10 Typical Housing in Indonesia (#4 is Unique)

Indonesia is a country of diversity, it has many cultures from Sabang until Merauke. The word culture does not merely refers to traditional dance, weapons, song, or local language only, it also refers to the housing type in Indonesia. Indonesia has many typical housing that differs one culture from another.

Moreover the housing itself symbolizes the local culture and reflects the identity of a region. We can easily characterize a region by looking at the housing features. More details about the typical housing in Indonesia will be explained below. 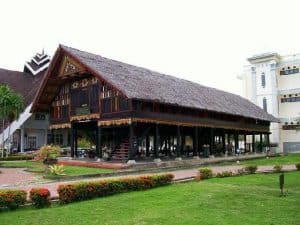 This typical housing is commonly know as rumoh Aceh. This house is in the form of stilt house with  one front staircase that is commonly used for lalang.

People in Aceh prefer to live in modern house instead of krong bade, why? Actually the cost of construction for krong bade is  more expensive. This housing also requires a high cost for housing maintenance.

This typical housing has a special meaning for the people of Aceh, it reflects the Aceh craftsmen in the past.

The floor is not directly touching the ground, it floats certain meter above the ground. The surrounding in Aceh at the past is surrounded by environments full of forest therefore the people chose a stilt housing. Krong housing symbolizes a closeness to nature, it does not use nail but wooden adhesive tool. 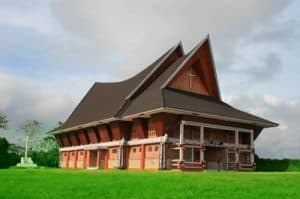 Bolon house becomes the identity of  the Batak tribe in North Sumatra.

Bolon House is a stilt house which all parts of this house are made of natural building materials. the walls are made of woven bamboo, the floor is made of board, while the roof is made of leaf material or palm fiber.

It was functioned as the home for 13 batak kings in the past. However now, it is used for the house of local Batak people as well. This house is divided into several rooms and each room is separated by customary rules that limit and bind every member of the family or guests. 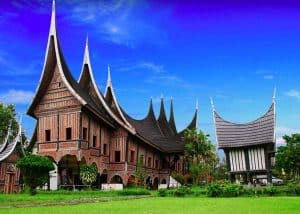 Gadang is a traditional house of Minangkabau. This house is unique because it has rules for people who live inside. The number of rooms depends on  on the number of women.

Traditionally, this house is owned and inherited from and for the women. This house is functioned as a place to live,  a place of family deliberation, a place to hold ceremonies, and other cultural activities.

It is acknowledged as a holy thing by the Minangkabau community therefore everyone who wants to enter this house must clean their feet first.

The form of Gadang house is like a ship, its roof comes from the leaves Rumbio (nipah). The overall shape resembles a buffalo horn with four or six arches, with one arch toward the front of the house. 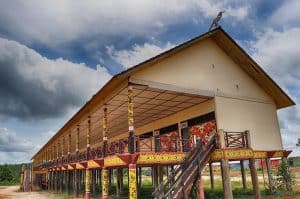 This long house comes from the Dayak Tribe in West Kalimantan. Betang house is an identity for Dayak community, it describes the social life and also acted as the center life for Dayak people.

The height of this house depends on the height of the pole supporting the house, the length is about 180 meters and it has 6 meters width.

Surprisingly there are about 50 rooms inside which filled by many families. In order to enter betang house, the people use tangka or a long stair.

This house is very big even though it has narrow shape. This house is built high from the ground to prevent from wild animals attack and to keep the family safe from tribal attack. The other functions such as a place for holding meetings, traditional ceremonies or rites in the Dayak community. 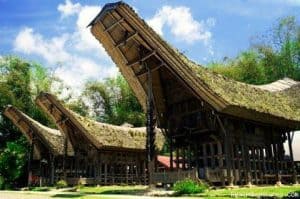 South Sulawesi also has a traditional house named tongkonan house. It is Culture of Toraja which has shape like boat from the ancient Chinese kingdom. It is functioned as  the center of governance, power, and social strata on elements of Toraja society.

According to the local Toraja culture, tongkonan house is the ‘Mother’ while the alang sura (the rice granary) is the ‘Father’.

The rows of tongkonan and alang were facing each other because they were considered as husband and wife. Alang sura facing South meanwhile the tongkonan house facing North direction. Traditional house Tongkonan usually equipped with buffalo horn decoration. This decoration reflects a symbol of luxury and social strata. 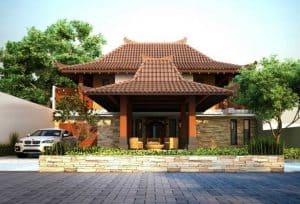 The people of Java know a variety of residential designs, one of them is a house design called Joglo. One of the uniqueness is located on the roof frame design that has a high ridge.

The roof of this traditional house is made of  fibers or woven reeds in the past. Generally, joglo house use hard wood which good for wall pole, the roof frame, door, window, and other parts. The main material of this house is teak wood. Teak wood is very durable and it can last for hundreds year. 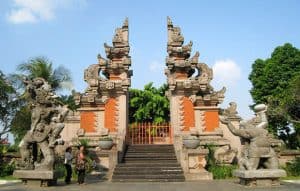 This house is the reflection of Balinese culture and it contains philosophical meaning. The name of this house is taken based on the design of the entrance gate that looks like temple.

The inside part of this house is colored with Hinduism value, there are a holy place inside for the owner to pray.

Apparently the existence of those housing are getting rare because the local people use modern housing nowadays. However, you still can discover some traditional housing in each region in Indonesia. Not only as a place to live, the housing also symbolizes the identity of each region.

The 17 Traditional Beliefs in Bali That Exist