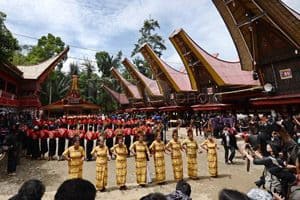 Toraja name was originally given by Bugis Sidendereng tribe and from luwu. The Sidendreng named the people of this area with a Riaja which means “People who dwell in the land above or mountains”, while the people of Luwu to Riajang is “the person who dwells in the west”

There is also another version of the word Toraya origin To = Tau (people), Raya = from the word Maraya (large), which mean the great man, nobleman. Over time this mention becomes Toraja, and the word Tana means country, so the place of Toraja tribal settlement is known as Tana Toraja.

So what is the culture of Toraja tribe in Indonesia? Let’s see it below : 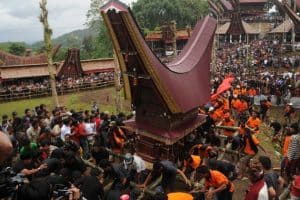 Rambu Solo is a traditional ceremony of Toraja people’s death which aims to honor and deliver the spirit of the deceased person to the spirit realm, that is returning to eternity with their ancestors in a resting place.

This ceremony is often called a ceremony for the perfection of death because the deceased is considered dead only after the whole process of the ceremony is fulfilled. If not, then the deceased is only considered a sick or weak person, so he remains treated like a living person, that is laid in bed and given food and drink and even always talked to.

In addition, in this traditional ceremony there are various cultural attractions that are displayed, including buffalo fights, buffalos that will be sacrificed in the first race before slaughter, and foot race. There are also staging some music and some Toraja dances. Buffalo slaughtered by slashing the neck of a buffalo with just a single slash, this is the hallmark of the Tana Toraja community. Buffalo to be slaughtered is not just an ordinary buffalo, but the buffalo Cauca Tedong Bonga whose price ranges between 10 to 50 million or more. 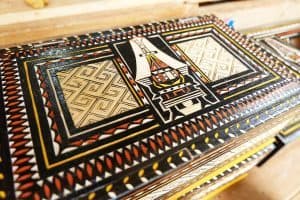 Toraja Land is one of the most famous areas for carving. This carving became a typical art Toraja tribe in South Sulawesi. The carving is made using a special carving tool on a wooden board, custom house pole, window, or door. Not the origin of carving, every motive of carving from Tana Toraja has a special name and meaning. Orderliness and discipline are common features in Toraja wood carvings.

In addition, Tana Toraja carving has abstract and geometric properties. Plants and animals are often used as the basis of Toraja ornament. 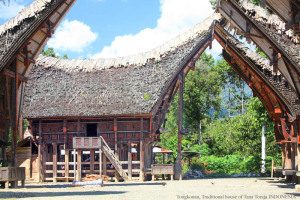 Tongkonan is a traditional house of Toraja community, consisting of wooden piles decorated with red, black, and yellow carvings. The word “tongkon” is derived from the Toraja language which means “sitting”. In addition to home, Tongkonan is the center of Toraja’s social life. The rituals associated with this traditional house are very important in the spiritual life of the Toraja people.

Therefore all family members are required to participate because it symbolizes their relationship with their ancestors. According to Toraja folklore, the first Tongkonan was built in heaven with four pillars. When the Toraja ancestors descended to earth, he imitated the house and held a great ceremony. 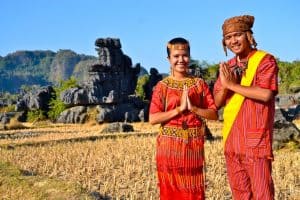 Toraja traditional man clothes known as Seppa Tallung Buku, in the form of long pants up to the knee. This outfit is still equipped with other accessories, such as kandaure, lipa ‘, gayang and so on. Toraja custom clothing called Pokko ‘Dress for women.

Pokko shirt ‘in the form of a short sleeve. The colors yellow, red, and white are the colors that most often dominate Toraja custom clothes. Traditional clothes Kandore is Toraja custom clothing decorated with beads that became the decoration of chest, bracelet, headband and belt. 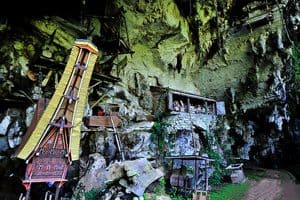 Londa is an ancient tomb complex located in a cave. On the outside of the cave looks typical Toraja wooden puppets. The dolls are replicas or miniatures of bodies that died and were buried in the place. Miniature is only for nobles who have high social level, ordinary citizens do not have the honor to be made their statue.

The Tana Toraja Cave Tomb is a grave on the side of a cliff, one side of the cemetery at the height of the hill has a deep cave where the corpses are set and grouped by family line. On the other side of dozens of tau-tau stands gracefully on the balcony of the face like a living open eye looking full with authority. 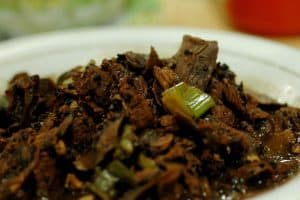 Pa’piong is a typical Toraja food that has a unique name and pork-based or usually can also be chicken meat. If usually the pork or chicken is processed in burn or in fried or can also be boiled, Toraja people process the meat by putting it into the bamboo and then burned it. Such as bamboo rice processing. But after cooking with bamboo this food then processed again by baking meat that has been cooked with bamboo.

The process of making before being put into bamboo, the meat firstly processed by mixing it with spices and then added with local chili. 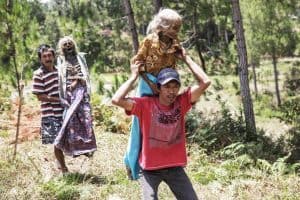 One of the Toraja customs to honor his ancestor, is Ma’nene or changing ancestral body clothes. Many farmers honor the bodies of their ancestors after the harvest was completed in August. Ma’nene rituals or changing clothing in Toraja community, beginning with a visit to the location of their ancestral graveyard called Patane. In Patene, the corpses of their ancestors who have been hundreds of years old are kept intact, because previously given a preservative.

Ma’nene procession is done by the family by cleaning the ancestral corpse that has been hundreds of years old, by removing old clothes used. After that, the body was dressed in new clothes, the corpse of men wearing a suit with a tie suit and the glasses.

Before opening the door of the Patane cemetery and lifting the coffin to be cleansed, the customary figure called Ne ‘Tomina Lumba, first recited a prayer in ancient Toraja. Prayer to ask permission to the ancestors so that people get mercy blessings every season until the harvest is abundant.

Okay, that’s it the Culture of Toraja. This unique tribe of Indonesia surely has some amazing yet stunning cultures, rather “weird” to us maybe. However, their culture is adding the wealth of the cultures in Indonesia. No matter where the culture come from, culture is an important thing in our life, so we must keep it, and make it save by keep remembering and applying it in our life. Have a great day everyone.