Indonesia is the country with a lot of cultures. Each culture will conduct some unique events to show its existence.  However, the event is also aimed to get a lot of visitors from other regions of Indonesia.

In some big day celebrations, each region in Indonesia usually has their own way to conduct some events. The event is held well with a lot of preparations. Some of the celebrations are unique. That is why you need to see these following paragraphs about 10 Unique Celebrations in Indonesia.

Panjat Pinang is the famous game event to celebrate the Independence Day of Indonesia. It is usually held by the citizens in some regions in Indonesia. The participants of the game should be men. Panjat Pinang actually has been famous since the Dutch Colonialism in Indonesia.

The main equipment of the game is the areca nut tree or usually called ‘pohon pinang’ in Indonesia. The tree must be straight and high enough. Then, it will be smeared by machine oil. The committee of the game will put many gifts on the top of the tree. And, the participants must compete to pick one of the gifts. It is not easy to pick the gift because the tree is very slippery. However, the people would be so enthusiastic to watch the game.

Rabo Rabo Jakarta is the Christmas celebration that is conducted by the citizen of Tugu, Koja Jakarta. Rabo rabo is actually adapted from Portugal. It is because almost of Tugu people are Portuguese descent. In Christmas celebration day, they will visit the nearest church in Tugu. After praying there, they visit the houses in Tugu one by one with singing ‘Keroncong Tugu’.  They will do apologize toward the host. Next, the visited neighbor will join to visit the next house.

Tabot Tabuik is the traditional celebration of Bengkulu people. It is aimed to welcome Islamic New Year. The ceremony is done on the tenth day of Muharam month. Muharam is the first month in Islamic calendar. Tabuik is actually the parade of decorated chests around the village. Then, in the end of the parade, the Tabot will be sunk to the sea. The decorated chest symbolizes the greatness of God who has flown Imam Husein (an Islamic figure) to the sky.

While the celebration of a big day is usually crowded and lively, Hindus is different. They don’t celebrate their big day with some festivals or carnival. However, they celebrate it by not going anywhere. Nyepi means being silent. So, it is called the Silent day. They believe that ‘Nyepi’ is the day of the Gods’ purify. That is why when Nyepi day, almost of the tourism object in Bali are closed. All the activity in Bali is off.

However, Nyepi day gives the good effect toward the environment. It is proven that in Nyepi day, it could reduce the carbon dioxide emission until 20,000 ton in a day. Is it good, right?

The participants of Perang Topat are the Hindus people and the Islamic people in Lombok. Between Hindus and Islamic people, they will throw the topat each other. There is no anger between them. However, they will laugh loudly. Although they have the different belief, they don’t really do the real war. Perang tupat is the form of the tolerance in Lombok.

Mepe Kasur is the unique celebration to have Eid al-Adha day in Banyuwangi, East Java. It is located in Kemiren Village. The name of the tribe is Osing. All of the Osing people will do ‘Mepe Kasur’ (drying the mattress under the sun) compactly. So, if you visit this village on Ed al-Adha day, you will see a lot of mattress in front of the houses. They believe by doing this celebration, it would avoid them from all the diseases. The celebration will be ended on the Tumpeng parade at night.

Grebeg Sudiro is actually the mixture celebration between Chinese-Javanese in Solo, Central Java. Grebeg is a traditional celebration from Java. Meanwhile Grebeg Sudiro is aimed to celebrate Chinese New year. In Grebek Sudiro, they make the mounts of the crops. Then, they will go around of Solo with it. The parade will be stopped in front of Tien Kok sie temple. The top moment of this celebration is when the people compete to get some of the crops. There is also the traditional cake of Chinese called ‘Kue Keranjang’.

Bunga Lado is the celebration of Prophet’s Muhammad Birthday in Padangpariaman, West Sumatra. Bunga Lado means the tree of money parade. It is the imitating tree that the leaves are made of some money. In a tree, it could have various nominal of money. It is usually on the rate 1,000 Rupiahs until 100,000 rupiahs. The money on the tree will be used for the charity to build mosque. This celebration is aimed to build a recognition of charity for Islamic people.

While Grebek Sudiro in Solo is conducted for the celebration of Chinese New Year, Grebeg Yogyakarta is held to celebrate some Islamic celebration in Yogyakarta. Yogyakarta conducts Grebeg three times in a year. There are Grebek Syawal (for celebrating Eid Mubarak), Grebeg Besar (Eid al-Adha celebration), and Grebeg Maulud (for Prophet Muhammad’s Birthday).

The celebration is started with the troops parade of Keraton Yogyakarta (Kingdom of Yogyakarta) wearing the Keraton clothing and their weapons. In the end of the parade, they will show the Gunungan (A mount of the crops) and share the crops to the citizens of Yogyakarta. 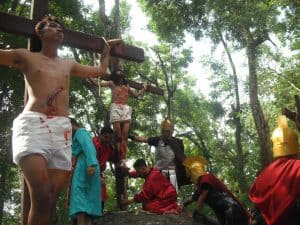 Jalan Salib is the procession of Easter day celebration for Catholics in Wonogiri, Central Java. It is usually held in Gunung Gandul. They will have theatrical show about how Jesus’ torture and crucifixion. The parade is start from the bottom up to the hill of Gunung Gandul. The participants will walk for along 3-4 kilometers. This possession is aimed to commemorate crucifixion of Jesus. That is why up to now Catholics celebrate the Easter day every year.

These ten celebrations in Indonesia are unique, aren’t they? Have you ever seen one of them? Maybe are you planning to see one of them? So, prepare yourself to explore Indonesia by seeing them. However, if you want to look for other information in Indonesia please read Indonesian Family Values