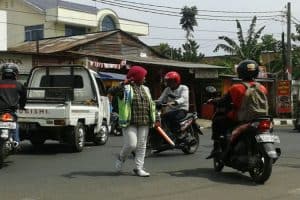 Indonesia has many occupations. Everyday thousands of company open job vacancies to job seeker out there. While the idea of job changes from then to now on due to industrial revolution 4.0, many jobs might be lost since technology replace them with lower production cost. However, new jobs rise to answer market demands, especially in this era of digitization, said Indonesian president Joko “Jokowi” Widodo recently in his speech to commemorate 74th independence day of Indonesia.

That’s true, most jobs should lost due to changes in our world. But many job opportunities might appears to replace the one that’s already lost. However, not all of Indonesian people has capability to adapt to this change, so that some people create unique jobs that take benefits from simple to serious problematic in Indonesia. Here are some unique occupations that you can only find in Indonesia.

When you visit Indonesia, you will mostly find crossroad without traffic lights. This place often gets crowded at specific time such as 4 p.m. to 7 p.m. since everyone finishes their respective jobs and heads back to their home.

You will find very messy traffic jam since every one doesn’t want to waste their time on the street. Resulting in long and noisy congestion. Then, in the center of the street, you’ll meet approximately one or two people who command and order the vehicles, making the road less and less messed up.

More: How Does Traffic Jam Happen?

Those people are called Pak Ogah. They’re not police, just ordinary citizen who cares about traffic jams. They also don’t get enough paid. Sometimes several drivers give them pennies as a way to say thank you.

They usually wear uniform (orange, green, or blue) and using a stick and a mini flag to direct which line has to advance and which line has to stop. Pak Ogah is one of the hero Indonesian people don’t deserve because they don’t get enough credit for their dedication.

Unfortunate time usually hits us on the street. We drive peacefully then suddenly our vehicle’s tire is exploded. Then we don’t know what to do because garage is still far way.

This might be common in every country but they usually exchange foreign money to their currency. But in Indonesia, you can find individual who give you service to exchange your big amount of money to lower amount. For example, you could change 100 thousands rupiah to 50 pieces of two thousands rupiah.

This service usually appears near to Islamic holiday, Eid Al-Fitr, since Indonesian adult has tradition to give money to children to reward their effort to fast in Ramadan.

Related topics : Things Not To Do in Eid Al-Fitr in Indonesia and
Indonesian Muslim When Ramadan, What Do They Do?

There’s also this strange job in Indonesia that involves magic. He/she is rain witch. People believe that he/she can control the weather to call or to drive away the rain. Most of people still use them in outside event such as music concert, cultural events, or wedding party (Most of Indonesian marriage in village is held in outside).

Most of their work is successful and because of that they usually charge high bill to their client. An hour of controlling weather could cost about a million rupiah if the witch has powerful spell to call or hold the rain.

In foreign country, it’s probably a big question to what it is a parking staff. He, most of them, is the one who order the parking. Indonesian people can be messy to put their vehicle when they visit traditional market or mini market. The parking staff is there to do their job, to make those messy vehicle in order.

They can also be found in some cultural events and festivals. They usually charge some amount of money ranging from a thousand to five thousands rupiah depending on what vehicle you bring. It might be little amount of money, but they can get almost a million per day in total since the number of vehicle in Indonesia is very big.

In Indonesia there’s people who offer the service to repair your broken shoes. They can be found in traditional markets. Usually they also offer a service to clean your shoes so that it looks like it’s a new shoes.

Some of them will stay in the market waiting for people to approach them and use their service. Others might go around offering their service to people. They don’t charge a lot of money to pay their effort. Usually it’s around 30 thousand to 50 thousand rupiahs.

If you go to the cultural festivals or just go around in the park in Indonesia, you usually find people riding bicycle carrying many instant beverages ready to serve with ice. That job is very unique and can only be found in Indonesia.

You can also find them carrying some snacks to please your time while you walk around in the park. Most of the seller are grown men and women, usually they charge their products ranging from five thousand to ten thousand rupiahs depending on what beverage you buy.

Most of Indonesian likes to play in the rain. That’s why they don’t bring umbrella to prepare themselves in case it rains in rainy seasons. Some of them might forget to bring theirs because they were hurry to go to work. When rain comes, they stuck on the street and can’t go home because of rain.

But there are people who gives their service to hand these unfortunate people umbrella and accompany them to the place where they can access public transportation to go home. These people are called ojek payung. Their job is to help people to cross the street using their umbrella and they get paid for that service. Very unique, isn’t it?

Some of Indonesian people also offer the service to repair utensil that’s broken as a solution to buy a new one. It’s very common in village someone offers to housewife to look after their broken utensils such as pan and saucepan to be repaired using the technic that he has learned for years. It actually helps mother to save their money and arrange it to more important thing such as debt and school needs.

In foreign country, herbal medicine usually is sold in drugstore, in a official place. But in Indonesia, some women mix traditional herbs to make healthy beverage and sell it around markets. The seller carries bottles filled with those herbal beverages and offer it to people whom they encounter in the market, in the street, or even house per house, if they go to some villages.

This beverage is proven to be healthy as it’s produced from local ingredients. The price is also not very expensive ranging from two thousand to five thousand rupiahs per glass.

Those are some unique jobs that you can find in Indonesia. It might feel strange to some people but some of them help people a lot with their dedication to their job. Some of the job will be everlasting because the demand is always be there, no matter how the world changes and that’s what makes them unique.