To respect the tradition the people doing kinds of festivals in order to make the area more lively, and in the same time making the culture still exist by doing all activities included within that culture. And until know, the Indonesian people really like to do some activities that are still having relation with the culture of their own area. And because of that, in Indonesia you can find so many varieties of festivals that are very unique can even can not be found on othea r countries, So, what are the facts about Indonesian festivals? Here’s the info for you. 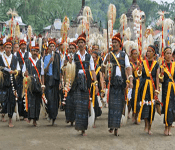 As for the first festival, we have this Reba festival with us. Reba festival is the traditional festival of Nusa Tenggara area. This ceremonial festival is held to celebrate the new year and always been held every 27 December of a year, and the peak of it is located sometimes in January.

This festival always held in one village called Bena, which is like 12 km from Bajawa. You should take a plane to Bajawa first if you’re coming from outside Nusa Tenggara islands. The people will sing along a song that has the strong philosophy of unity and togetherness. Also the people will wear the traditional clothes. 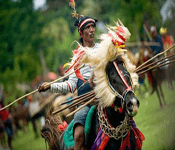 Aside from Reba is this Pasola Festival. Pasola is the traditional festival of Sumba area, held by the people who have the Marapu endemic religion. The word Pasola came from “Sola” which means a wooden pole, that used in the ceremony.

There will be two groups of people who ride their own horse, and the start throwing their poles. Before actually doing it, first thing first people will held the Nyale festival, which is the festival during the full moon for catching Nyales, the small sea worm. 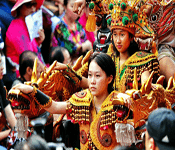 The next festival is this Cap Go Meh. The festival usually held in every city of Indonesia, but, if you want to look at more rousing festival, you can see the Cap Go Meh in the area of Singkawang, West Borneo. In here, the festival looks more crowded.

The even is so big, even called as the biggest Cap GO Meh festival in South East Asia. The most important session inside this festival is the Titung ritual. This Ritual said to be able to repel the evil spirit and poorness for a year. 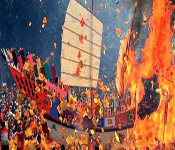 This procession of Bakar Tongkang is the annually festival held by the Chinese people in the area of Riau. People doing this festival in order to give appreciation toward God Ki Ong and also God Tai Su Ong, The Chinese Gods. At first, people will bring the ship or tongkang to Bagan Siapi-api, and then burning it as a reflection that they don’t want to leave the area ever again. 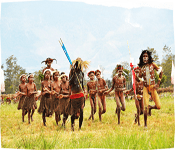 And in the number five, here is the famous Baliem Valley Festival. We already talked about this festival in the other article we have wrote that consisting much information about the festival of Baliem Valley itself.

This festival included three different tribes who live around the valley, Dani, Lani, and Yali tribe. At first, the festival only had the war procession only, but now it has so many varieties like war dances, any other traditional dances, and also some musics. 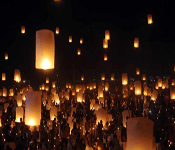 Dieng culture festival is The festival that of course, held in the tourism area of Dieng. Firstly held in 2010, the Dieng Culture Festival always succeed for bringin people in, even some more through the years.

This festival has different processions or events, including the kids with long anc curly hair. In this unique phenomenon, people will cut the hair of the kids because of the tradition. People in Dieng believe that the kids will bring good fortune in the future. 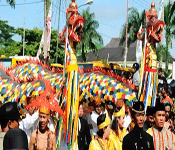 This festival is located in the island above Java, the Borneo, East Bornei to be specific. The word Erau means crowded, a lof of fun and happiness. In fact, Erau can be included as one oldest culture festival in Indonesia, that started since 14th century.

The festival mainly used for the inauguration of the Kings of Borneo. The people will celebrate it with the long days festival to respect and showing gratitude toward God because of the new King of Kasultanan Kutai Kertanegara. 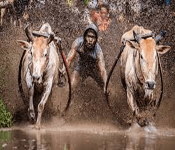 This is the traditional race of Indonesia everyone. If you already know one form of animal race in Indonesia called Karapan Sapi, this is actually a little bit same from that. If Karapan Sapi basically pick the winner based on the first one who reaches the finish line, in this Pacu Jawi, it isn’t.

Theres one person in a cart and a buffalo who pull the cart. In this Pacu Jawi, the winner is the racer who can mantain to the position to straight for finish line. So in one session, you can only find one racer in there, not 2 nor three. 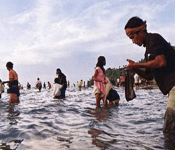 This Bau Nyale is the annual festival held by the people of Lombok, West Nusa Tenggara. It always held during the 20th days on the 10th month of the year based on the traditional Sasak tribe calendar, which is different from the usual calendar.

Bau Nyale means Capturing Nyale. What is Nyale? It’s the name of the sea worm that always come out once a year. There’s not only capturing Nyale procession in here, the festival also filled with Colossal drama theater, choosing Mandarika Princess, Peresean, bicycle race, horse race, and some more. 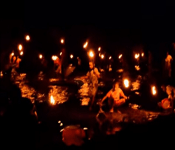 Timba Laor festival is identical with the festival above, Bau Nyale. Within the festival, there’s also the procession of catching Nyales or sea worms in certain beaches. Many people come to this Ambonese festival because it’s really beautiful and exclusive.

Usually, people will search the sea worms during the night. Because there’s no single light on the beach except the moon shine, they use the torches to make them see more clear and in order to catch so many worms. 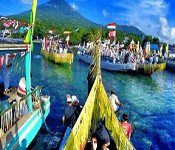 Like the name of this festival, the area that held this festival is in Tidore, presented by the government of Tidore. The festival happens in order to celebrate the anniversary of Tidore City, which is now has approximately 900 years old.

Many tourists coming to Tidore to look and be present on this 3 days long festival, even some foreign tourists are also present. There are so many activities that included in the festival, interesting enough to invite the potential tourists out there. 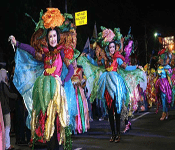 The Central Java also has its own unique festival, called Semarang Night Carnival. This is the annual festival to celebrate the anniversary of Semarang city. The event is always inviting so many people, hundreds of them that consist of students, communities, and artists.

In the Semarang Night Carnival, the thing that you should see is the costume parade. They use so many decorations on their clothes. For you who interested, you should come to the festival starting from 7 pm on May.

Aside from the festivals mentioned on the above information, there are some festivals that also worth to mention on this article of facts of Indonesian festivals. There are three different festivals that we can see in here.

That is the complete article of 17 facts of Indonesian festivals. All of them spread across the country and still maintained by the people who live in the area the culture grows. The people also doing it willingly, with fun even.

This is like the perfect example of how beautiful the culture is, either Indonesian or cultures on other country you live in. With the uniqueness of the tradition and the culture that still being performed by the people, all can live in harmony