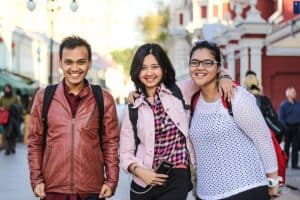 Since the beginning of the time, Indonesian society always holds this value in their entire life. Gotong royong means doing anything together, without hoping anything in return. In ancient society, Indonesian builds a building using this method. All member of village comes together helping each other building houses, village office, fields, etc.This value is also built in traditional game called Panjat Pinang (climb a pillar). This game involves many people who will climb a pillar that has been rubbed with oils without using any tools. These people need to climb to top in order to get many presents that has been hung on top.This game teaches how Indonesian people will always work together to go on top, using bond between one another to achieve the same goal. This makes the friendship of Indonesian people strong because they feel the same struggle and hope which strengthen their friendship.

There was dispute and there will always be in the future. But togetherness is always proven to solve them. Bringing people together and talking about the solution was successful in decreasing problem. It strengthens bonds between one another and make them see them as not only an ally, but also a friend, a best friend.
This friendship and togetherness run in every Indonesian people since they always bond by the same family tree and that makes Indonesian people friendly because they are family.

Indonesian traditional games teach Indonesian kids about the value of friendship. Mostly they play together in the field with their friend and grow up together. Even though they will go to different route, their friendship will always be there because it’s build since they were children.Most of Indonesian traditional games values hard work and togetherness. For example, Bentengan (Defend the castle), values teamwork and strategy because a team needs to defend the castle in order to not to be taken over by enemy’s team. Bentengan makes Indonesian children grow with friendship value, respecting differences, and doing everything together.

That’s why Indonesian people mostly are friendly people because they have been taught to be such since they were children. More: Traditional Games in Indonesia. and Traditional Sport Originally from Indonesia.

Bhinneka Tunggal Ika is a foundation that builds unity in Indonesia. Without it, many tribes, religions, groups, and community will have dispute each other because they don’t have the sense of belonging.

This sense of belonging is what makes many people spread from Sabang to Merauke to look at themselves as one people, Indonesian. This motto is a tool that has always been used since Indonesian founding father era to unite a nation that’s build around many different cultural backgounds.

Traditional jobs in Indonesia require a lot of hand works. Especially when there’s not enough technology to support it back in the day. Take an example, a farmer.A farmer cannot cultivate his/her land by their own hand. They need help from other people to do the plantation, fertilization, watering, until harvest season comes. More: Know More about Indonesian Lifestyle and Strange Rituals in IndonesiaHarvesting also needs a lot of work, like process of harvesting itself, packaging, storing in warehouse, etc. It needs a lot of help from other people. This is why farmer usually ask for help from other people. They are usually paid, but not as worker. But as friend and partner.From those little close relations, friendship is built between those people. The relation is not ended there, there would be another activities in the future that involves both parties. This builds trust and friendship. This trust and friendship doesn’t end between farmer and his/her friend. It continues with people in the market and someone who will buy the products. This friendship relation keeps circling from time to time, thus Indonesian people growth friendly characteristic within themselves and apply it to whoever they encounters.

Indonesian education has unique curriculum that involves daily life and its practices. It’s based on teaching about application of Indonesian ideology, Pancasila. This ideology is expected to be used by each individuals in order to create peace and freedom among society.The values of Pancasila should be practiced by students in their daily life. Thus, friendly characteristic has been internalized since childhood. This makes Indonesian children to be more respectful and responsible.This program builds Indonesian society to value national interests rather than personal, tribal, or racial interests. This creates bond between one person and another to comprehend each other and be friendly with one another.

Education about nationality and Pancasila ideology teaches Indonesian people to look at each other equally. Telling the fact that this nation is built from tears and bloods from national heroes to defend their country from Occupier and those struggle has to be hold highly and proudly by all Indonesian citizen.