10 Ways on how to Experience Ramadhan in Indonesia 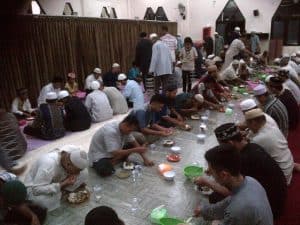 Ramadan is the ninth month in the Islamic calendar and is celebrated by Muslims around the world with fasting (saum) and commemorates the first revelation that descends upon the Prophet Muhammad according to Muslim beliefs. This annual celebration is revered as one of the pillars of Islam. The month of Ramadan will last for 29-30 days based on the observation of the new moon, according to some rules written in the hadith.

Tarawih is a mandatory worship of Muslims who only performed on Ramadan. Tarawih praying is usually done when the night after 7PM after breaking the fast. You can go to the mosque and watch so many people go to the mosque to perform tarawih prayer service. In the month of Ramadan, the mosque will look more crowded than during ordinary days. For that, if you are Muslim, you can participate in performing tarawih prayers in the mosque which is only done once a year.

Ramadan is a sign close to Idul Fitri or eid Mubarak. Indonesian culture requires Eid-ul-Fitr to be celebrated with everything clean and new. So that all people in Indonesia will hunt shirt for Idul fitri so that later look new when used.

They are not even enough to buy only one or two pieces of Eid clothes, but more than one. For this reason, the traditional market of wholesale centers in Indonesia such as Tanah Abang will be more crowded by people.If you want to try shopping at Tanah Abang Market before Ramadan, you can go to Jakarta.

The only activity in Ramadan month is ngabuburit. This word derived from Sundanese means waiting for dusk. But now the use of word ngabuburit become very popular in the community any area when the month of Ramadan. This one activity is actually not much different from the activities of the streets that you usually do in other months. But the difference is ngabuburit done deliberately to wait time to break the fast.

In Indonesia, you can enjoy spending time for Ngabuburit places. Some of tenager even do ngabuburit by hanging out in some of places like city park or fly over.

During Ramadan, the whole restaurant and eating place will be full of people when it comes to breaking the fast. It’s a tradition when Ramadan arrives they will schedule to open together with friends, family, or maybe a friend’s office or school.

This is because basically Indonesian people love togetherness, so they together break their fast with different menus in restaurants spread all over Indonesia. You can prove yourself to find a meal before breaking the fast in Indonesia. The streets are jammed, everyone is out of the house.

The tradition to awaken people to wake up to eat sahur is already quite popular in some areas in Indonesia. The terms used to refer to this tradition are very varied and different in each region. For example, in the area of Pantura, people call this tradition by the term Komprekan, Cirebon called it with Obrok-burok, Tektekan in East Java and in Semarang called Dekdukan.

Not only on the island of Java, outside Java there is also a tradition like this, in Gorontalo area for example there is a similar tradition called Tumbilotohe. But whatever the name, all these traditions have one thing in common that aims to awaken the community so as not to miss the meal.

Takjil is a snack to break the fast when Maghrib arrives. Usually, this takjil menu is diverse in Indonesia. The most famous and most widely sold takjil is Kolak.

Thus, many pop up markets when Ramadan. They sell a wide variety of foods as takjil to break the fast. Usually this pop-up market will be visited by many people and make it jammed everywhere. You can try endiri how fun to choose the breaking menu in the pop-up market. You will be spoiled with a variety of foods that can only be found in Indonesia.

In addition to the activities of awakening the Sahur, there is one more action on behalf of humanity that is also done at the time of dawn. It is Sahur On The Road (SOTR), a real action to give a meal for those who want to follow fast but limited by all obstacles, such as the duafa to the poor on the roadside.

Basically, this activity is upholding solidarity and humanity among all. By raising money, those who are engaged in this action are distributing food to the Sahur to anyone they encounter along the way or the route they are traveling around.

The month of Ramadhan is an opportunity for Muslims to get as much reward as possible. So, they do a lot of worship in the mosque. After tarawih, they usually will not go straight home. They will first follow the activities of reciting the Koran together in the mosque. Here it is usually one person will read some verses of the Qur’an that are evenly shared with others. So when Ramadan ends, the target of 30 ju has been reached.

On the last day of Ramadhan, usually people in Indonesia will hold a roving Takbir or torch parade. They will tour the village by calling the pronounciation “Allahu Akbar” as a sign of tomorrow is the day of victory after a full month they fasted in the month of Ramadan

The Takbir tradition of welcoming Idul Fitri is still fertile in the Indonesian community. This local wisdom grew as an expression of gratitude for the day of victory, after a month of fasting. Usually residents crowded down the streets of his village with a torch, while echoing the sentence takbir.

Towards entering even until the end of ramadhan the firecrackers always adorn the atmosphere of the month of Ramadan which should be a month full of solemnity and peace. Whether starting from a clear tradition of burning firecrackers is already entrenched and entrenched for the children or teenagers and some ‘adults’ Indonesia.

The firecracking firecrackers echoed here and there. Some cheered because of the ‘explosion’, some were disturbed by the firecracker’s fired sound. This is a tradition since tens of years ago in Indonesia.

Those are some ways how to experience Ramadhan in Indonesia. Hopefully, you can enjoy the fasting month in Indonesia

13 Best Beaches in Bali for Snorkeling

12 Things not to Eat or Drink in Bali