One of culture kinds in Indonesia is festival. Festivals give people opportunity to come together and celebrate something that they have in common. Local festivals usually celebrated within small community, like a village, when something important happens. Read more about How do Indonesian Greet Each Other

Meanwhile the regional and national scale festivals have bigger range than local festivals. Here are some unique cultural festivals in Indonesia that is preserved by the Indonesian people. 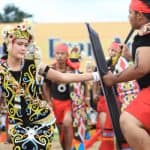 Erau is a festival tradition that is held every year in East Kalimantan region exactly in Tenggarong, Kutai Kartanegara. The word erau itself comes from Kutai language, erau or eroh refers to a  crowded, noisy, noisy, and joyful atmosphere.

In the past, Erau was organized by people who live in palace  during the glorious period of the Kutai kingdom. Read more about Unusual Traditions in Indonesia

However, since the Kutai kingdom collapsed, the Erau festival is now taken over by the government to commemorate  the anniversary of Tenggarong city. Even the Erau Festival now has been listed in the calendar of national tourism event. 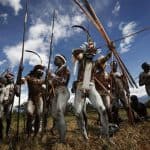 This is an extraordinary festival which has been a visitor attraction in Papua. The Baliem Festival is a symbol of fertility and prosperity. This tribal fighting festival  has lasted for many years and it is certainly safe for you to enjoy.

The fighting scenarios triggered  other tribes to have revenge so that the raid was done. Read more about Indonesian Traditional Lifestyle

However this attraction does not make revenge or hostility as the theme, instead it conveys positive meaning “Yogotak Hubuluk Motog Hanoro” which means the hope for tomorrow should be better than today. 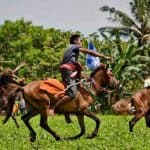 This festival originated from Sumba region. Pasola has become a tourist attraction as well as cultural icon of Sumba Island.

Pasola is a traditional war of lempar lembing on the horse back. This festival usually began with nyale ritual; a ritual of  of looking for marine worms which symbolizes the start of harvest season. Read more about Traditional Beliefs in Bali that Exist

The rato usually predicts that nyale will come out in the morning when the sun is about to rise. If the nyale is fat and healthy then it is assumed the harvest will succeed, on the contrary, if the nyale is thin and brittle, the local people believe that this is a bad sign. 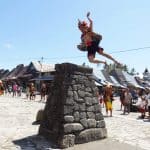 Fahombo, Hombo Batu or Jump Stone is a traditional Nias trbe sport. This sport is functioned as a ritual also dedicated for the young men from Nias tribe to obtain maturity status.

The essence of this ritual is to symbolize that the young men are ready to be adults and ready to fight difficulties in life. This ritual requires the players to jump over the arranged stone building which has height about 2 meters.

Rambu solo isn’t coming from Solo region, it comes from Tanah Toraja region. this festival is held to honor the deceased, so that his spirit will arrive quickly and safely.

Rambu solo is a funeral procession of people who have nobility background.  Another part of the funeral ritual is buffalo slaughtering. Read more about Tana Toraja Death Rituals

The more powerful a person is, the more buffaloes are slaughtered. The peak of the funeral ceremony is marked by the slaughter of dozens of buffalo and hundreds of pigs. It is accompanied  by music and dance. Some of the meat was given to the guests. 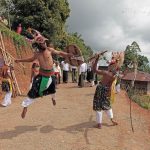 Komodo Festival is a festival that aims to introduce all things about the island of Komodo that located in East Nusa Tenggara, Indonesia.  This festival is enlivened with carnivals, cultural parades, exhibitions, and artistic attractions.

One of the most interesting of these traditions is the attraction of Caci Dance. Caci dance is a war dance between a pair of male dancers who fight with whips and shields. Read more about The Komodo Dragon Island in Indonesia

This community dance usually be the most stunning performance in Komodo festival that can attract foreign tourists and local people. 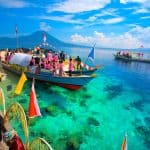 Jailolo is another name given locals to Halmahera Island, North Maluku. This festival is a celebration in Halmahera islannd with various cultural performances such as  Cakalele, Soya-soya, Legu Sarai, Yanger music, Tataruba, Sara Dabi-dabi, Horum Sasadu, as well as colossal culinary events that invite all visitors to eat together.

The Jailolo Bay Festival was first held in 2009. This festival is now a regular annual event held by the local government of Maluku to promote the region of West Halmahera to be included in the leading tourist destinations in Indonesia. 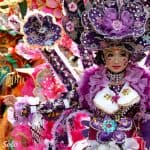 Since long time ago,  batik tradition has very strong roots in Solo. Solo, a city located in Central Java, uses  batik as an icon and identity. It reflects a royal city known for its beauty and courtesy.

Solo Batik Carnival was held to strengthen this tradition, and further to promote Batik on a national and international scale. Read more about Types of Batik Printing in Indonesia

The event is a combination of ceremonies, fashion shows and carnivals, all using batik as a common theme. There are also bazaar  that offers a variety of unique batik products and souvenirs from Solo to be seen and purchased. 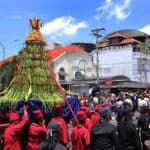 In Javanese language,  “gerebeg” means “crowd” and Mulud refers to one of the months in the Javanese Calendar. This event, also known as Sekaten, is a birthday celebration event of the Prophet Muhammad.

This is a full day procession by issuing two sacred gamelan (Javanese musical instruments) and they are brought to the Grand Mosque. Read more about Most Popular Islamic Celebrations in Indonesia

In the evenings there will be a folk market on the north side of the city which add excitement to this event. this location is a great place to try a variety of Javanese and Yogyakarta main dishes and souvenir hunting.

Those are the unusual festival in Indonesia that are related closely with traditional values of each region.

13 Effects of Transmigration in Indonesia