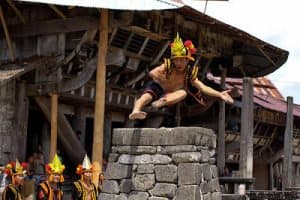 Indonesia is a country rich in culture and tribe in it. Culture in Indonesia is very diverse both in the arts, culture or habits, foods, beliefs and others. In discussion this time, we will discuss the culture that is on the island of Nias.

The island of Nias, located on the western side of the island of Sumatra, is more or less located approximately 85 miles from Sibolga, the province of North Sumatra. Is inhabited by Nias tribe or they call themselves Ono Niha who still have megalithic culture.

The island that has a Protestant Christian majority population has been divided into four districts and one city, namely Nias District, South Nias Regency, West Nias Regency, North Nias Regency, and Gunungsitoli Municipality. Okay, before learning about its culture, we better know about its history first 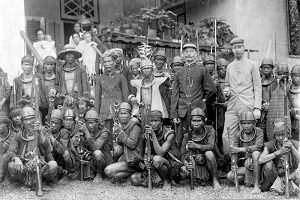 At that time only exist Hoabinh culture, Vietnam is the same as the existing culture in Nias Island, so it is suspected that the origin of the Nias tribe originated from the Asian mainland in an area that is now a country called Vietnam.

According to the Nias community, one of the myths of the Nias tribe originated from a tree of life called “Sigaru Tora`a” located in a place called “Tetehöli Ana’a”. According to the above-mentioned myth the first human arrival to Nias Island began in the time of King Sirao who had 9 sons who were sent out of Tetehöli Ana’a for the Throne of Sirao.  The 9 sons were considered the first people to set foot on Nias Island. and then start to develop as one community as can be seen right now.

Of course this tribe has their own traditions, making it different from other tribe. Their culture is much special, and already known through archipelago. Those traditions are : 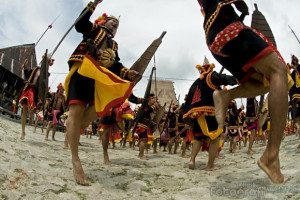 The War Dance or Foluaya is a symbol of the knights of the youths in the villages of Nias, to protect the village from enemy threats, beginning with Fana’a or in Indonesian called ronda or siskamling. At the time of the patrol if there is a signal that the village has been attacked by the enemy then all the soldiers gather to attack the enemy.

After the enemy was attacked, the head of the enemy was decapitated to be offered to the King, this is not done anymore because there is no longer tribal war in Nias. This offering is also called Binu. Giving up the beheaded enemy’s head to the king, the soldiers also condemned the enemy by saying “Aehohoi” which means a sign of victory.  (Read also : Flag of Indonesia – Indonesia Military Power).

After that, the king welcomed the soldiers with great joy by holding a massive party. Then, the king handed Rai, which is a crown to the soldier. Rai in the tribe of Nias is a sign of warlords. Not only was Rai given, frozen gold was also given to other soldiers who had also taken part in killing the enemy. Later, the king ordered “Mianetogo Gawu-gawu Bagaheni”, with a fatele showing agility with a complete jump with his weapon called Famanu-manu shown by two front-facing soldiers. 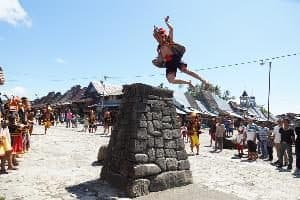 Megalithic culture that is still original in Nias according to its name Megalithic or large stone, in Nias there are still many big stones in the villages in Nias. These large stones are used by the local community to do the tradition Stone Jump or Hombo . The tradition of stone jumping has been done since the time of the ancestors, where in ancient times they often fight between tribes so they train themselves to be strong and able to penetrate the opponent’s castle is said to be high enough to cross.  (See also: Natural Disaster in Indonesia)

As the times progressed, this tradition also changed its function. Because today they are no longer at war then the stone jump tradition is used not for war anymore but for ritual as well as a cultural symbol of Nias people. The tradition was held to measure the maturity of a man in Nias as well as a physical and mental test of teenage boys in Nias before adulthood.

The tradition of stone leaping is done by Nias youth to prove that they are allowed to marry. The stone that must be jumped in the form of a building like a monument pyramid with a flat top surface. The height is no less than 2 meters by 90 centimeters wide and 60 centimeters long. Jumpers jump over the big Stone through a small stone footing before jumping over the big stone. Jumpers not only have to cross the pile of rocks, but they must also have techniques like landing, because if they land in the wrong position it can cause fatal consequences such as muscle injury or broken bones. 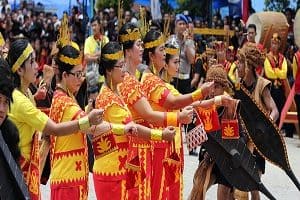 Moyo Dance or also called the Eagles dance that continues to flutter its wings gently without tireless, conquering something meaningful for each other and itself. This dance symbolizes the tenacity and spirit together in realizing something to aspire to. Moyo dance is sometimes performed after or before the event or the celebrations of certain days, even to welcome guests in Nias itself. (see also: Longest River in Indonesia)

Its indeed a beautiful danced. Danced by several women, its an unique danced with smooth hand movement, a cooling side of the war dance. Its really nice to see it. 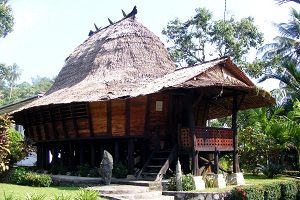 Nias traditional house or Omo Hada is a traditional stage house of Nias people, that is for society in general. In addition there are also other custom homes of Nias, namely Omo Sebua, which is the home of the chiefs of the country (Tuhenori), the village chief (Salawa), or the nobility. This stilt house is built on high and large nibung (Oncosperma tigillarium) wooden columns, which are grounded with sumban (Metroxylon sagu). The schematic forms are oval (in Nias north, east, and west), some are rectangles (in central and southern Nias). (See also: Traditions in Bali)

The building of this stage house is not grounded that is embedded into the ground, and the connection between the skeleton does not use nails, to make it resistant to earthquake shaking. The room in the traditional house is divided into two, on the front to receive guests stay, as well as the back for the family homeowners. On the front of the house there used to be a stone statue, a stone seat for traditional parties, as well as in the village square there are large stones that are often used in stone jumping ceremonies. (See also: Ngaben in Bali)

Currently a stone relic from the Megalithic period like that which is still good condition can be seen in the villages of Bawomataluwo jo Hilisimaetano. There is a certain type of traditional house formerly used specifically for the houses of the idols of the Nias people, called Osali. Because at the present time a large number of Nias people have embraced Christianity, so the name is also used to refer to the church.

That’s it the Nias Tribe Culture. We need to know the cultures that exist in our country so that we are not influenced by outside cultures that do not fit our culture. To be not unaffected by the bad culture of Globalization, we must know who our identity as the nation of Indonesia. Have a good day everyone,