Home » Socio Cultural » 13 Unusual Jobs in Indonesia Can Amaze You

13 Unusual Jobs in Indonesia Can Amaze You

Common professions such as doctors, soldiers, or teachers exist all over the world. However for Indonesian, there are some profession that only exist and famous in Indonesia only. This proves that the Indonesian people are unique and creative, they can take advantage from the slightest opportunity. Here are the list of unusual jobs in Indonesia. 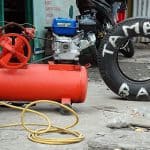 The number of motorcycle users makes this profession growing. Tire repairmen become the hero for motorcycle bikers. The tools used by the tire repairmen are very moderate, whereas the latest motorcycle still use their services.

The tire repairmen open a small shop on the road side. The bill is adjusted in accordance with the job handled by the tire repairmen however it is relatively cheap. Read more about Kinds of Disasters are Common in Indonesia 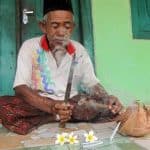 This profession is usually needed when the celebration is going to held. Without we knowing, the rain handler can make the sky brighter. 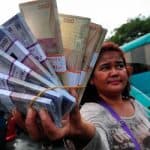 This profession is crowded with customers during the Lebaran season. Lebaran is a major celebration for Moslem people and as we know the majority of people who live in Indonesia are Moslem. Therefore this unusual profession exist.

The person hawking new money on the road side, the exchange trader  gives his services to exchange money with large denominations with new money to be given to the people especially children. Read more about Unusual Sports in Indonesia 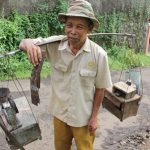 This profession is a legendary job in Indonesia. It has been there since years ago. The stained man offers  his services to repair the kitchen appliance that has hole or damaged.

On the other hand, the housewife in Indonesia was a big fan of this man.

It is better to get the kitchen utensils fixed instead of purchasing the new one. However unfortunately as the development era strikes, the people who do this job are decreasing. Read more about Indonesian Traditional Lifestyle and Unusual Festival in Indonesia 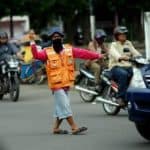 In a country where the number of motor vehicles has reached through millions of units, this job is surprisingly a profitable job.

The actual parking attendance usually equipped with complete attire such as wearing a uniform vest, carrying a whistle, and of course, preparing the paking ticket.

The daily job for parking men including rearranging motorcycles and cars neatly, put the cardboard on the seat so it will not be hot,  pull the motorcycle out of trouble, and help the riders to cross or turn back. 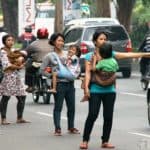 This unusual job emerged due to the local government’s regulation in Jakarta which requires that one car must contain at least three people, including the driver.

Then, in accordance with this regulation, the people see this as an opportunity to offers a service for the car drivers.

The additional passenger joins the car so the amount of passengers in one car fulfill the regulation. Read more about  Common Work Values in Indonesia You Must Know 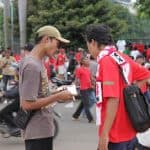 Actually this profession not only exists in Indonesia. However this unusual job has many customers during special events in Indonesia such as during religious celebration, music concert, or sport events. The ticket brokers see various transportation in Indonesia as an opportunity to raising money.

This job help people to get ticket without queue (it is a tiring thing to do and it wastes time) however the ticket that you get from the ticket brokers usually more expensive than the actual price. 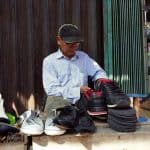 These people are very helpful to solve your problem. Especially for those who have hole on their shoes but do not want to throw it just yet, please see the shoe sole service.

On the other hand, from ancient times until now this work still exist and grow well.

The people who do this work will help you to glue the shoes, fix the shoe, fix the heels, even shoe polish. You may spot a small shop of shoe sole service in Indonesian side road. Read more about Typical Work Hours in Indonesia 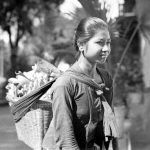 Indonesia is very rich with natural herbs and spices for remedy. Those spices and natural herbs are processed to be a traditional healthy drink called jamu. Jamu is a good drink to be used as remedy to heal illness or to strengthen the human’s immune system.

Jamu gendong sellers, just like its name, it is sold by women who carry a bucket of jamu drinks on their backs.

You can find this unusual job in Indonesia especially in Javanese regions. Read more about Indonesian Herbal Medicine and its benefits 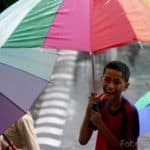 Are you familiar enough with the word tukang ojek? what comes into your mind when you heard tukang ojek? Tukang ojek usually deals with motorcycle, however, ojek payung doesn’t use motorcycle at all. The name of this profession is made according to the service offered by the people who claim themselves as ojek payung.

Those unusual jobs might seem low for some people, however those people is importantly helpful to solve Indonesian people daily problems and help the  Daily Activities in Indonesia run well.

10 Unusual Laws in Indonesia (#1 is Extreme)