10 Unusual Sports in Indonesia (#6 is Unique)

Do you like sports? Whichever kind of sport that you like, if you done it regularly it will definitely have a positive impact for your physical and spiritual health. One of the most favorite sports in the world is football.

Football will not only make you physically trained, it will also train your brain,  increase social interaction,  and can make your mood better. Among all of the sport kinds in Indonesia,  there are several types of sports that originally belong to Indonesia.  Some of them still survive until now. Here are the list of 10 unusual sports in Indonesia. 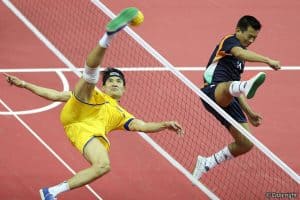 Do you know what kind of sport that originated from Indonesia,  played in a way like playing football and volleyball, but it is done in the badminton court? The answer is sepak takraw.

This sport  originated from the Sultanate of Malacca era, it was called as sepak raga during that time.

The number of players in sepak takraw is three persons for each team.

The players who participate in this sport should not touch the ball by hand, and should only use their feet. Basically the movements in sepak takraw is pretty similar to martial arts movements. 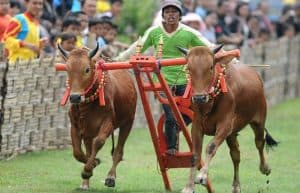 Karapan Sapi is a cow race sport originated from Madura region in Indonesia.

In this sport, a pair of cows are ‘exercising’ by pulling train made of wooden materials to run through  the 100-meter track.

Karapan sapi requires a person (called as jockey) to  stand on the wooden carts in order to control the cows while they are running.

Karapan sapi becomes a public festival because it attracts visitors from local and abroad. The local government put much appreciation to this sport, they hold karapan sapi match on September or October each year. 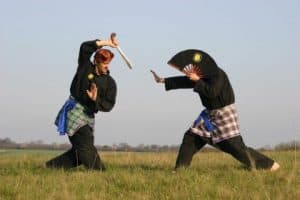 This sport is part of Popular Sports in Indonesia that has been developing since the past.

Pencak Silat is rooted from Malay culture and has been widely known in various countries such as Malaysia, Brunei, and Singapore.

There are various kinds of pencak silat in Indonesia, many of them are developing in accordance with local communities. 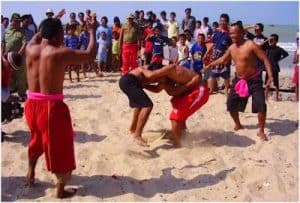 Pathol is a traditional wrestling sport originating from Central Java region especially Sarang District, Rembang.  It is said that this sport has existed since Majapahit era.

This sport was originally a contest to  to find the best knights that could keep the port of Tuban.

Pathol movements then adapted and developed by the youngsters  and local communities until it eventually grows into a popular sport in Indonesia.

Pathol wrestling is generally held on the coast, usually held when there will be full moon or during special days which is  coincide with the ceremony of sea alms. 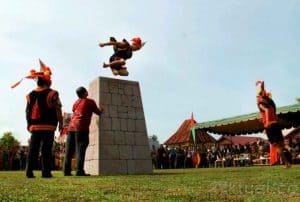 Zawo zawo is a kind of traditional sport among people in Nias, North Sumatera.

The rule of this game requires the players to jump into the hompo batu or the composed stone that were arranged well before. The arranged stone itself has shape like trapezium that reaches 2 meters high.

During the old days, a man needs to jump over the stone as a requirement to get married.

Nowadays zawo zawo still can found in villages which located in South Nias District. Due to its uniqueness, this unusual sport is drew on the Indonesian money for years. 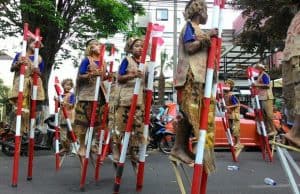 Egrang or jangkungan or stilts are poles that used by person to stand within a certain distance above the ground. Egrang, often called as walking stilts, equipped with ladders as a stand, or straps to be attached to the legs.

The purpose of this sport is to stand tall above the normal heights.

In floodplains or unstable lands, buildings are often built on stilts to protect against damage by water, waves, or shifting soil. It has not been discovered yet who found this kind of sport at first, however this unusual sport has been developing in the local society for  centuries. 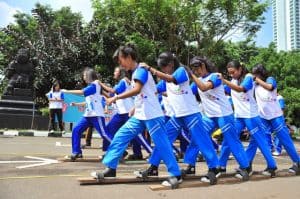 Another unusual sport in Indonesia named bakiak, this is actually an amusing game which uses bakiak or sandal made of  light wood.

Bakiak is easy to made, easy to play, and give so much fun for the players and the audience who watch the game.

Basically, bakiak is played during special event in the local community; one of them such as 17th of August event to celebrate Indonesian independence.

3 to five persons stand and share the same bakiak then walk in a perfect rhytm as fast as they can. This unusual sport can increase cooperation and improve social interaction. 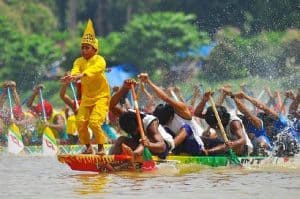 Pacu Jalur is a kind of traditional rowing boat sport that comes from Riau. The boat on the race runway has length about 25-40 meters. The boat is long enough to accomodate 40 to 60 boat crews.

Commonly, this sport is held  in villages along the Kuantan River to commemorate the big day of Islam such as Maulid Prophet Muhammad SAW, Idul Fitri, or Muharam new year.

Now the race runway has entered into the national tourism calendar, this pacu jalur festival is held every year on  23-26 August.

This sport usually held in one of the most Famous Rivers in Indonesia, which is Batang Kuantan river in Riau. In the past, this river was  a symbol of social identity because only the datuk-datuk and nobles who can be transported through the river flow.

Indonesian unusual sport is loaded with cultural values therefore each region has typical or distinctive kind of sport.

15 Unusual Traditions in Indonesia (#2 is Extreme)