Home » Place » Village » Wae Rebo, A Village above The Sky in Flores 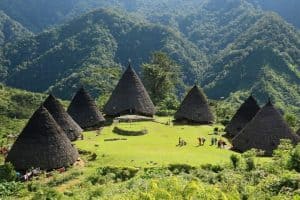 Nusa Tenggara Timur (NTT) is one province in Indonesia that’s located in the East side in Indonesia. This province’s capital city is Kupang and it has 22 regions. It has around 550 archipelagos with Flores, Sumba, and West Timor being the most famous place in the province. Read more: 13 Site in Flores,. and Best Snorkeling Site in Flores, Indonesia. NTT offers various tourism site that’s incredible to be your choice. It has Komodo Island where you find ancient dragon species originally from Indonesia, Kelimutu Lake, and Mutis Mountain. Those tourism sites offer their own attractiveness and uniqueness to tourists. But, there’s one place that’s very beautiful yet very rare to find in Indonesia. It’s Wae Rebo village.Wae Rebo is a small and mysterious village that’s located in Manggarai, Nusa Tenggara Timur. This village sits in 1200 meters above sea level. Can you imagine how high it is? That’s why most people call this place “Village above the Sky”. This village only has seven houses that’s called Mbaru Niang. It’s traditional house originated from Flores that has cone shape and consists of five floors with about 15 meters high. This traditional house is very rare to find except in Wae Rebo Village that UNESCO gives this house the highest prize in heritage conservation in Asia-Pacific back in 2012.More unique fact about Wae Rebo Village is that the people who live there believe that their ancestors is originally from Minangkabau, Sumatra. This means that in the past, Minangkabau people migrated to high ground in the Flores, settled a housing in that area and thus Wae Rebo was born.

More: Some Martial Arts from Minangkabau, Indonesia. Legend says that Someone called Maro who is from Minangkabau is the one that unites people from different ethnicity to settle houses and aside their differences in Wae Rebo village. It’s also believed that this village is already established around 19 generations. If it’s calculated, it’s estimated that this village already exists around 1000 years.

More: Traditional Houses from Sumatra That Will Amaze You.Those houses are not only there to be artifacts, but it has deep philosophical meaning as well. The cone-rounded shape of the house represents bond and harmonization between human and earth. Also, as it’s mentioned before, a Mbaru Niang contain five floors which has 15 meters high. The lower ground represents the death. This is where Wae Rebo’s people bury the deceased.

The center of the house represents life, where people do their daily activities. This part is called Lutur. It consists of rooms where people do their own activities. In the center of the house, there’s one pillar that hold the house called Siri Bongkok. People deeply respect this pillar because they believe that it sustains the livelihood of the village.Most of the sacred artifact and traditional music is hanged in the pillar. It’s also considered as a throne for the leader of the village, Tu’a Gendang. Whenever there’s activity in the house, Tu’a Gendang sits in the center laying down his back towards the pillar. Lastly, The highest floor of the Mbaru Niang is used to save the result from harvest season. It’s also represent the spiritual connection between human and divine being. This floor is also where Wae Rebo’s people practice their religious ritual. They also use this floor to present their harvest seasons result to their God.More : Indonesian Cultural Philosophy You Should Know.

The route to get there is pretty hard to track due to its high ground, but most of people want to take the challenge to find this beautiful scenery in the top of the mountain. Wae Rebo can be accessed 6 km from Dintor Village to Denge Village using motorcycle. The journey from Denge to Wae Rebo is rough, requiring about 3 hours of walking through forests and cliffs.As tourism site, people in Wae Rebo also provides souvenirs for tourists visiting the village, such as handcraft, local coffee, vanilla and cinnamon. Tourists, especially European, love to visit this place because they’re intrigued by the complexity of Wae Rebo’s architecture.More: These Are Hand Craft Originally Coming from Indonesia.This is one of the finest tourism site that Indonesia could offer. Wae Rebo is so high that sometimes cloud hides this village that makes it more mysterious. It’s one of the ancient heritage that Indonesia needs to preserve. If you afraid about the accommodation, don’t worry local people also build some houses to serve good guest housing for tourist, so that visitors can feel how to live in very remote and ancient village in Indonesia without any technology and modernity touches it.Those are some information regarding Wae Rebo’s village. As one of the ancient village in Indonesia, it’s a responsibility to Indonesian people to keep this heritage alive by promoting this uniqueness to international market, yet keeping its traditional, ancient value and belief that local people hold for a long period of time.This place is a must visit site if you have plan to visit Eastern Indonesia, especially Nusa Tenggara Timur, alongside Komodo Island.

History and Philosophy of Indonesian Flag