History and Philosophy of Indonesian Flag 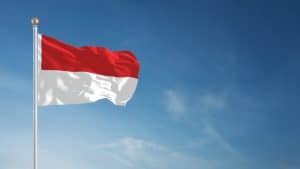 Indonesian flag has color red and white in horizontal direction. It was tailored in 1944 before Indonesia announced its independence day in August 17th, 1945 by Indonesia’s first president’s wife Sukmawati. The original flag is knitted by hand since there wasn’t many shewing machine back in the day. It’s also used in the main ceremony of Indonesian independence day until it cannot be used anymore in 1969 and it’s kept in Istana Merdeka.

This flag has deep philosophy and long history in its making, carrying hopes and wishes from older generation to younger generation, from soldiers and national heroes that has been fallen in defending the country from the colonial. The circle goes on and on until the end of the time.

There are many version of philosophy regarding Indonesian flag. The most popular one is that the red color represents courage, that hopes all Indonesian people isn’t afraid to no matter what challenge they face in the future. Meanwhile, the color white represents purity, hoping that Indonesian people do their task with pure heart without bad intentions.

Some scholars believe that Indonesian flag resembles Majaapahit’s flag, an ancient kingdom living around Javanese archipelago around 13th to 16th century. It’s also believed that Kediri Kingdom is also used the same shade of color in their flag. Most of the kingdom in monarchy era in Indonesia uses mostly red and white shade in their flags.

This could mean that the one who design Indonesian flag goes back in time, looks back in ancient Indonesia and discover what color most of kingdoms use back then. It’s also considered the sacred meaning behind the color as well.

Some studies argues that Indonesian flag is based on the philosophy that’s used by Austronesian people back in the day about the concept of earth and sky. They believed that earth color is red (the soil) and the color of sky is white. If we track to the Austronesian country the white and red color is dominantly used in their daily life.

Then these color is the embodiment of the connection between earth and sky and applied in many things we can find around us.

It’s believed that most Indonesian kingdom uses the red and white shades in their flag as this article mentioned before. In Bugis Bone Kingdom, when they go to war, they use this little flag sign that has also shades red and white.

If you want to know more about Dutch colonization, you can read interesting piece of Dutch occupation in Bali.

Some scholars thinks that in Aceh, one of its hero uses the same shade of red and white color to fight against the enemy. According to history, this color is heavily influenced by Prophet Mohammad, then it’s applied in their weapon as it has little flag with red and white color.

Thus, Indonesia’s social life practice is heavily influenced by Islam because most of its citizen chose Islam as its religion. Indonesian Muslim is very different with other Islamic country such as Malaysia or Arab countries, thus it has interesting facts that might be giving you more information about Indonesian Muslim.

Local food in Indonesia doesn’t only consist of palm sugar and rice, but also other interesting ideas to process raw food material to amazingly rich seasoning food that might attract you to visit Indonesia.

Those are some philosophy that build Indonesian flag using the white and color shade. Based on the explanation above, it can be concluded that Indonesian flag is designed to honor its heritage of using the shade in many different occurrences. It also has history to reunite youth across Indonesia to fight against Dutch Colonialism.