Home » Religion » Islam » The List of Islamic Heritage in Indonesia 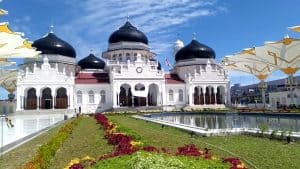 The entry of religion and Islamic culture to Indonesia directly or indirectly gave a big influence on the culture and way of life of the people of the country. The existence of this Islamization process brought impact and changes in all areas of life, ranging from the economic, social, political, educational, even cultural.

As we know, long before Islam came, the people of Indonesia are still strongly influenced by Hindu-Buddhist teachings, but as the entry of Islam into the archipelago, the process of cultural mixing becomes unavoidable. Even in their daily activities, their lifestyles began to shift and little by little influenced by Islamic culture. The magnitude of this influence of Islamic culture even penetrated into every layer of society, not least the Islamic kingdoms that ruled at that time. As a result, many relics of the Islamic-patterned kingdom that up to now we can still meet.

The palace or palace is a vast building that is used as the residence of a royal king or queen. In addition, the palace is also usually functioned to run the affairs of the kingdom. The palace is generally surrounded by a large wall high as a symbol of “separation” between the king and the common people. Well, in Indonesia itself there are quite a lot of relics of the kingdom of Islam in the palace that is still very awake to this day. Keraton Ngayogyakarta Hadiningrat (Daerah Istimewa Yogyakarta).

The second legacy of the Islamic empire we can easily encounter is the mosque. Yes, as a place of worship is certainly this building into points that can’t be missed by the members of the kingdom in his time. Generally, mosques are built in the square close to the palace. In Indonesia, there are many relics of Islamic empire tangible mosque, among others:

Yes, you are not misread. In addition to the palace and mosque, complete tombs and gravestones are patterned Islam is also widely found in Indonesia as evidence of the historical relics of the Islamic empire. Some of the ancient tombs of Islam include:

Islamic culture is indeed strong influence in all areas, including in the field of education. Well, one proof that Islam has a considerable influence is the establishment of a religious-based school or so-called pesantren.

This one educational institution has existed since Islam began to develop in Indonesia. In Indonesia itself there are quite a lot of pesantren that become the reference of students who want to gain public knowledge and religious knowledge, such as Pesantren Ampel Denta in Surabaya and Prabu Giri Satmaka Pesantren in Gresik. Ampel Denta Pesantren itself was founded by Sunan Ampel, a member of Walisongo.

Not only in the field of education, the entry of Islam to Indonesia also made a major influence on the development of art and literature in the country. There are quite a lot of Islamic relics in the field of literature are famous until now, such as Hikayat Panji Inu Kertapati, Hikayat Amir Hamzah, Hikayat Bayan Budiman, Hikayat The Poor, Hikayat Bahtiar, Hikayat Hang Tuah, Syair Abdul Muluk, and Gurindam Twelve.

Quite a lot of religious celebrations of hereditary heritage of Islamic empires are preserved to this day, among them are Garebek Besar, Garebek Syawal, and Garebek Maulud or Sekaten held in Keraton Surakarta, Yogyakarta, and Cirebon. There is also a Tabuik celebration held in West Sumatra. Tabuik festival itself is a celebration to commemorate the death of Hussein, the son of Khalifah Ali bin Abi Talib who is none other than the grandson of Prophet Muhammad SAW.

Those are some Islamic heritage that left in Indonesia. Up to now, Islam becomes the most embraced religion by Indonesians people. It means that more than 70% Indonesian are Moslem. That  is why there many Islamic inheritance that found in Indonesia.

The History of Sufism in Indonesia

The Brief History of Islam in Bali