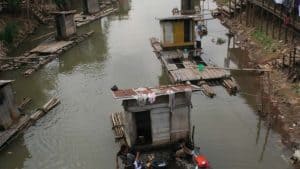 Indonesia is one of the worst sanitation countries in the world.

Lack of poor sanitation and hygiene and environment, related to transmission of some infectious diseases such as diarrhea, cholera, typhoid fever, and paratyphoid fever.

Working performance of employees in the company’s seams will decrease due to some illnesses caused by sanitation. As you know, sanitation will cause many diseases including respiratory problems, cough, flu, or even how many other dangerous diseases.

This will cause some employees to be absent and unable to work. In addition, some workers will appear weak and pale. They would not work with their highest perform and best energy. The decrease in work productivity of employees will automatically make companies lose money.

Due to poor sanitation (which causes some disease), some employees tend not to work optimally. Production targets are not fulfilled even neglected. As a result of the ineffectiveness of the workers in doing their work, the quality of production decreases.

This will have an impact on customer trust. The decline in production quality will certainly be very risky on the sustainability of cooperation between customers and companies. In this case some companies will automatically lose.

3. The decreasing of production

A company producing something must qualify product safety, so it is necessary to implement an adequate sanitation program. Without good sanitation, food and beverage companies will reduce their production. This is done to minimize the decrease of production quality.

As a result, the company can’t meet the high demand of production. This is also done to reduce the budget due to the costs incurred to improve sanitation.

The raising of monthly budget is a big impact of sanitation. Poor sanitation would make the budget for health, medical consumption, and food becomes bigger. It would not only happen toward the government and company, but also a family budget. It would make an influence in outcome per capita. Of course it would impact toward the economy growth in Indonesia.

The bad sanitation as the result of miserable defecation erodes intellectual capacity and blocks growth and development of children in later life. As adults, the malnutrition of the children is more susceptible to non-communicable diseases, such as heart disease and diabetes, because malnutrition children tend to be overweight as adults.

Only 5 percent of the feces and only 1 percent of the community’s waste water is properly collected and processed, causing concerns about health and environmental impacts. Moreover, about 14 percent of urban residents still practice open defecation.

The results of the 2008 Water and Sanitation Program-East Asia and the Pacific (WSP-EAP) study stated that due to poor sanitation since 2006 Indonesia suffered a loss of IDR 56 trillion (USD 6.3 billion), equivalent to 2.3 percent of domestic product gross (GDP) nationwide per year.

Poor sanitation also contributes significantly to water pollution – adding safe water costs to households, and reducing the production of river and lake of fish. In fact, the economic costs associated with polluted water due to poor sanitation reached IDR 13 trillion (USD 1.5 billion) per year or in the rate of 24 percent.

And the remaining 23 percent impact of time and access to tourism and land use losses. Conversely, for the well-created sanitation able to produce economic improvements, such as tourism sector of IDR 1.5 trillion per year.

Diarrhea due to poor sanitation causes the death of thousands of children every day. Children who survived were often not attending school because of the disease.

The absence of sanitation access is the most disadvantageous for women and girls, because it is they who have the highest security risk when looking for the location of defecation, or have to leave school when entering adolescence because of the absence of sanitation facilities in the school. Duo to this problem, the future generation would be in a harm state.

The poor sanitation would give a really bad impact toward the quality of soil. Poor sanitation in the company will pollute the water and even the surrounding land. If pollution occurs, this will have an impact on domestic food security.

Water used for irrigation can contain harmful chemical compounds that will certainly have an impact on food quality degradation in Indonesia. Ultimately, sanitation will have an impact on the decline of national income in agriculture.

That is the impact of sanitation on the economy in Indonesia. How to prevent sanitary hazards is to maintain personal hygiene and the environment, and pay attention to aspects of hygiene and health. These are done by government agencies, educational institutions, programs / projects, academics, communities and NGOs.