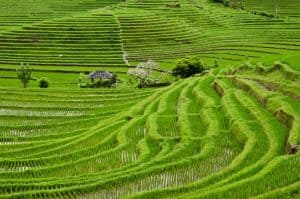 Who doesn’t know about Indonesia? And their habitat to eat some rice? Or which country also populated but not much like India and China? Yup you right, Indonesia is the exactly answer for those question. Like we know, Indonesia is one country with million culture and that’s why this country become really unique one also become favorite destination to traveling by some tourists. But for now, we wont talk about favorite destinations in Indonesia but for their original culture. And whats that?

Yup for now, we will talk about Indonesia agriculture which of course different than another country and even more make Indonesia unique. Its not only one topic we will talking about but some things in on time, like the history – food production – successful factors – and its development. So, what we have to know about agriculture in Indonesia?

Half of the Indonesian population still defined as rural although this has been declining steadily over past 50 years. Some people still don’t know about Indonesia agriculture history and that’s why we need to talk about it. Indonesia start about it own economy in late 1980s when the trade policy reforms were implemented through a series of deregulation packages that were issued at least once each year and which aimed at converting non-tariff barriers into tariffs, rationalizing and reducing tariffs and removing restrictions on foreign investment.

Between the mid-1960s and mid-1980s, the percentage of Indonesian land area that was used for agriculture stayed constant at around 21 percent of Indonesia’s total land area. Between that, in the mid-1980s this number rose to almost 25 percent until the late 1990s. Starting from 1998 another upsurge (due to the establishment of large scale plantations) made this number reach the current level of 30 percent.

The Government of Indonesia has made a great effort to integrate the Indonesian economy into the world economy. The process began in the mid-1980s and accelerated in the 1990s when the Government reduced international trade barriers substantially and opened up the economy to foreign investment. The impetus for Indonesia’s market opening measures was the sharp drop in oil prices. The objective was to restructure the economy by diversifying the trade sector away from its heavy dependence on oil. Government policies were highly successful at attracting foreign investment into light, labor-intensive export industries and led to the rapid growth of Indonesia’s manufacturing sector. One consequence is a declining share of agriculture in the total economy. In 1985, the share of agriculture in the GDP stood at 23.2 percent.

There’s also some common features of agricultural sector in growing economy and are generally viewed overall as unhealthy development. Indonesia has succeeded in reducing rural poverty significantly over last 40 years. National poverty, both urban and rural are measured at the national poverty line fell in 2008 to 15% desoide the rapid rice in food prices at the time.

In response to the economic crisis, the Government introduced a special distribution called programme for rice in 1998. Under the programme, up to 20 kg of rice is distributed monthly to needy households at a price that is considerably below the market price. The number of target families was originally set at 7.4 million, but this has since been raised to 16.8 million. There are now proposals to double the programme budget to compensate the poor for reductions in fuel subsidies and to make various administrative improvements so as to eliminate leakage and ensure better targeting of the poor. 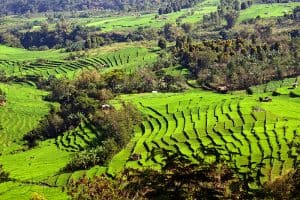 Java and Bali are only 7% of Indonesia’s total land area but it has 60% of Indonesia population. Agriculture in Indonesia is very intensive on these island with up to three crop rotations each year. In Java, soil are less fertile and the agriculture is less intensive. The major crop from there are rice, corn, cassava, soybeans, and peanuts. Indonesia also become one of the largest producer and exporter tree crops such as rice, corn, cassava, soybeans, and peanuts.

Indonesia’s major agricultural exports consist of products of tree crops, including palm and coconut products (33.8 percent), rubber (18.6 percent), coffee, tea and spices (25.9 percent). Indonesia has also had some success at diversifying into higher valued fruits and vegetables (5.8 percent). Together, these four product categories accounted for 84.0 percent of all agricultural exports in 1998-2000.

The Indonesian agricultural industry contributed around 14,7% to the country GDP in 2012. The number has significantly declined during last few years. Never the less, its still divided income for the majority of Indonesian household even today. Currently, the agricultural sector of Indonesia rises large plantation, both state owned and private. These large plantations usually focused on commodities which are mostly export products like palm oil and rubber while the small hold-farmers mostly focus their production on rice, corn, rices, vegetables, and soy bean.

Rice continues to be Indonesia’s most important commodity. Its very common to hear what people say about rice from Indonesia which has good quality. Its the single most important source of energy and protein in Indonesian diets and the most important employer in rural areas. For the past couple of years, there has been a heated debate within Indonesia concerning rice policy. Food security appears to be at the heart of this debate, where food security means the adequate domestic production of rice, or rice self-sufficiency.

Since the first five – year development plan (PELITA), positive growth of the agriculture sector has been a focus of attention in the overall development of Indonesia. The government vigorously acted to reduce food (rice) dependency from imports and the world market. In the 1960s and 1970s Indonesia was well known as a major rice importing country. At the time of former President Soeharto, it was realized that economic development was much more important than simple political euphoria when the majority of the people were poor – and some were starving.

Together with land and resource development, other agricultural development policies related to increasing food crop production have been vigorously strengthened. The main focus of policy was on increasing agricultural production through improved agricultural technology based on a selected package of improved seeds and varieties, fertilizers and pesticides. Designing and providing such improved technology packages was done through a national mass guidance programme. Adopting technology at the field level was facilitated by appropriate financial packages and subsidized credit channeled through village cooperative units. A large – scale agricultural extension programme using thousands of well – trained field extension workers was introduced to reach people near major – road networks.

Beside the government policies, theres also some factor which make agricultural in Indonesia become succesful one, due to the rapid rate of fertile agricultural land conversion to non – agricultural use reaching some 50 000 ha per year, prolonged drought and flood periods because of global climatic abnormality, environmental deg’radation, reduced subsidies of agro – inputs and agricultural extension activities, Indonesia’s rice self sufficiency began to be unstable. Although rice self – sufficiency was achieved in 1984, rice imports gradually increased. In the 1990s the level of rice imports have grown, reaching some 6 million tonnes in 1998 – or some 20 percent of domestic consumption. Such imports joined the pre – existing monetary and economic problems and growing political instability.

Not only that, these factors that influence Indonesia’s agricultural produce include the abundance of fertile soil, which has enable producing of various agricultural in between. Between 1960s and 1980s, almost 21% of Indonesia’s local area was use for agriculture. The number is also almost to 25% in 1985 with the larger establishment of larger scale plantations, especially palm oil and the land percentage subsequently reached 30%.

According to Indonesian agriculture industry, the annual percentage growth of industry would be 2,4% in 2014. However, industry experts are skeptical and expect the market to grow as lower case when compared to other industry and services sectors. The 2013 export figures for the palm oil sector would give the country a chance to answer questions about potential as an agricultural based country. The palm oil expects are supposed increased by as much 9% in 2014 as improving economic conditions encourage greater demand. The inventory levels usually harvested between 3 and 4 millions tonnes in 2012 but palm production use to 27 million. Between 2010 and 2014, the study about palm oil alone is exported to invested 80, 9 million into the national economy.

Beside this, Indonesia also intends to increase rice production from its current average of 2,7 tonnes per hectares to a minimum of 6 tonnes per hectares. To support this growth, the government already allocated USD 1,06 billion in 2013 which used extensively to support the production of food crops, expand research and develop the necessary infra structures. Regardless of the various government initiatives, policy matters are concerned about the export taxes to important taxes on farm commodities so that investment in the agricultural sector can be spurred. However, some critics think that Indonesia remains a good example of an emerging economy that has developed successful innovation system for its agricultural sector by linking private and public sectors, a development which boost the over all production.

Recently, Indonesia has new government programs was to advance the agricultural sector for regain the the country’s self-sufficiency in rice, as in the past. Due to the efforts to introduce mechanized agricultural technology, repair damaged agricultural infrastructure, also open new rice fields; the government has been able to change the country rice planting season from one to two or even three times each year.  With the success of the program in 2016, national production of un-hulled rice rose to 79 million tons in 2016, from 74 million tons of un-hulled rice in 2015 and 70 million tons in 2014.

For the successful program, the government increased un-husked rice production to 79 million tons, exceeding its target of 76 million tons of un-husked rice, and stop importing rice in 2016. National production of un-hulled rice rose to 79 million tons in 2016, from 74 million tons of un-hulled rice in 2015 and 70 million tons in 2014. Indonesian farmers should now become skillful in the use of technology and the use of hybrid seeds. Thus, they are expected to see harvest seasons two to three times per year. Additionally, the use of technology will continue to be promoted by the Agriculture Ministry in order to improve the welfare of the farmers.

And that’s all we know about agricultural in Indonesia. Really unique and make Indonesia difference than others right? Its also make Indonesia more valuable than another countries. So, you already know how beautiful Indonesia is right? 🙂