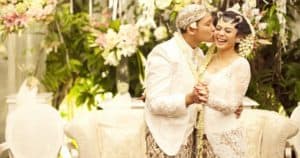 Around 40% of Indonesia inhibitants are Javanese. This ethnic came from cities like Yogyakarta, East Java, and Central Java. Javanese ethnic well-known with the prudishness. The way they spoke, walked, dressed, and sat is totally different. Especially when you make a comparison with Bataknese ethnic.

Javanese spread anywhere. If you disbelief, try to look around. Javanese found easily in every spot in Indonesia. Or maybe your neighborhood is Javanese. Who knows? (read also: Indonesian Etiquette)

Because they are anywhere, you feel unqueer of them. But, have you saw the wedding reception of Javanese? The ceremony looks very sacred and attractive. But, many people alluded that is very complex and take a long time. Started from one till five steps. Why took so long? Yup, that is the culture. We can’t do blaming. Every single step have a meaning. In the past, wedding ceremony took more than 7 days. Wow!

Javanese still stand out in their culture till now. They will make it last as a heritage, including the wedding ceremony. Well, in this occasion, we will discuss about five steps wedding of Javanese. There are: 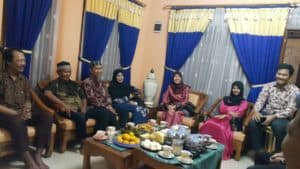 Congkog is the name to looking for any information about the bride. The representator will be choosen to dig up plenty information. Such whether the bride already have a crush or maybe engaged with the other.

Purposely, to take a step closer. If the bride engaged, the man must take a space. And looking for the other woman. But if she is not, the man would welcome to approach the bride. (see also: Indonesia Lifestyle)

Salar is a step to answering the Congkog. Yup, Salar is the time to answer if the bride want to engage or not with the man. This step will be held by the representator or the other. But still have a blood-line into the groom.

Nontoni will be commit if the bride’s family agree with the sign on of the groom. The evidence of agreement will be shown with encountering between the groom’s family and the bride’s family. Both would be discuss about the sustainable among their child. By this step, one will know the other well. It means easier to find out the personality of both family. (see also: Indonesian Mythology)

Nglamar close to “ngelamar” in Indonesia. The groom’s family will come over to make a deal for sign on. Thus, both of family would examine the date of wedding day. And plan about how the ceremony would look like. 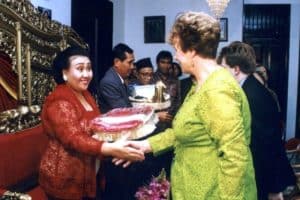 After finishing taklks session, the next session must be witness. This session must inviting the third party, like neighborhood, friends, or kinsman. (see also: Indonesia Language)

While helding witness session, there is a step named “Srah-srahan”. This step consist with rendered up the mean stuffs. The meaning not only from the outside but also inside. Such a ring, the bride’s cloth, jewels, and tradisional foods, like “Tumpeng Rice”. (see also: Fasting in Indonesia)

Srah-srahan step divide by four activities, there are:

Peningsetan is an event for exchange ring between the groom and the bride. By helding this, the engagement legitimated. This one is the most hype up event. All the guests must be clap and uproar. (see also: Indonesian Fashion Designers)

The guests in the ceremony as a witness of the vow between the couple. In this step, the couple asked for blessing to people they loved. There are also the specific witness which choosen intentionally. Paseksen is the most sadness ceremony. Beside asking for blessing, the couple must be ready to leave their family. Yup, because after the whole ceremony, the couple will built their own family. (see also: Indonesian Writers)

In Indonesia language, Gethok Dina as same as examine “akad nikah”. Akad nikah means “marriage contract. Both family would like to choose the best man to examine the correct date for wedding day. But the “best date man” only needed if the families really want the suit celebration day ever.

Move to the next level, called Standby Session. If witness session passed very well, now its time to spread the invitation. Both family would choose whom deserve to attend the ceremony. Mostly they invited friends, kinsman, close family, and maybe neighborhood. (see also: Indonesian Cultural Festival)

Beside the invitation, both family will start to prepare whom involve to the ceremony. You could named as a people behind the scene. Like whom will take care and participate for the whole wedding day. They work to decorate and prepare all the things require on wedding day. Also for groom and bride, report to the civil administration and KUA must be unforgotten. 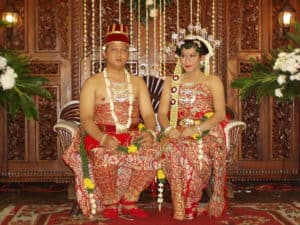 The beautiful bride and her groom must be located in front of a house. The bride make up traditionally wear gelungan named for the hairdo. Beside that, bride must wear shining and golden jewels. Also wear the traditional ensemble for her special occasion. The whole make up following Javanese make up as usual. As same as her handsome groom.

The ceremony held in the bride’s house. This is the traditional rule for Javanese. Must be unbroken. The couple well-known as a King and Queen throughout their special day. But, there are many attractive things inside the ceremony, such:

Tarub is a name for decoration throughout the gate of the house. It consists of different plants and leaves. Every plants and leaves not only the symbolize but also had meaning as well. (see also: Disaster in Indonesia)

Why should banana trees included in the ceremony? Because its such a wish that the groom could be a good leader for his family. Futher, banana trees growth and found easily. In Javanese means happiness could find everywhere.

Is kind of bouqet made of different sort of leaves. But mostly consist with coconut leaves putted into kind of banana trunk. After the ceremonial finished, Kembang Mayang will dumped into the intersection, river, or the sea. The goal is to keep remember where the couple came from. (see also:Misunderstanding of Culture in Indonesia)

Means to bathe the couple so that they clean up outside and inside. Thus, both would sit on the mat and ask their parent approval while dripping “pinisepuh” 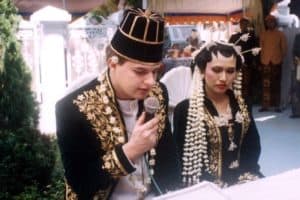 After through the whole session, now its a waiting day. Yup, wedding day comes up. While wedding day, the couple would like to follow “Ijab Qobul”. Ijab Qobul is a step to say the vow. Ijab Qobul likely to say in front of the Penghulu of KUA. After say few words and sign of the paper given, the groom and the bride officially become a truly couple. Groom become a husband, and bride become a wife.

In the entire wedding ceremony, gamelan music would played.  And all the guests would like to dance and clap for the born happy family. Those steps very difficult, isn’t it? Well, life not goes easy. Same as when you want to get married. Everything need steps. Just following the steps and enjoy it. Then it becomes easy to pass. Well, that’s all about Javanese wedding culture. Hope thats information kindly escalate your knowledge about culture in Indonesia.