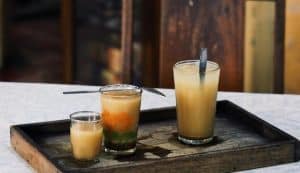 Jamu is a traditional herbal beverage from Indonesia. It’s very popular among Javanese people as Jamu is developed in this region. Jamu has been around for years as Javanese people keep producing it from generation to generation.

Most of Javanese people consume Jamu to keep their body healthy. Other than that, Jamu is believed to be able to prevent some serious diseases such as cancer and stroke. Moreover, Jamu is also beneficial for make your skin beauty and enhance your body stamina.

For many positive benefits that Jamu can provide to our body, there are some unique facts about Jamu that can blow your mind. Here are the highlight:

There are many version of how and when Jamu is introduced in Indonesia. Though it is still uncertain, some people believe that it has been around since the beginning of 9th century under Mataram Kingdom government.

Other version believe that Jamu has been around since 824 C as its proof is found in the sculpture in the Borobudur temple. It depicts ancient people had consumed Jamu as well. The newest version of Jamu is documented in a book written in 1911 by Dutch people who wants to know about Indonesian herbal beverage. The book contains recipe to make a glass of various Jamus.

Other historian believe that Jamu had been introduced in Java in 16th century. Jamu takes its name from two words, djampi and oesodo.

2. It Has Various Ingredients

Although there are many instant herbal beverage that’s produced by companies, traditional Jamu is still popular in Indonesia. You still can find traditional Jamu merchant who holds a box of Jamu in their back or bicycle in traditional market and in the street. Those Jamu have many names, using Javanese language, such as Beras Kencur, Paitan, Kunci Sirih, Kunyit Asam, Gepyokan, and Cabe lempuyang.

From those type of Jamus, Beras Kencur is the most favourite among Indonesian society since it has sweet and light flavour yet it has huge benefit for our body. This Jamu main ingredient is saffron-coloured rice with additional flavour from ginger and cardamom.

People love this traditional beverage because it gives body strength and immunity, also it increase your appetite.

People makes Jamu from specific ingredient in order to help or even heal someone who suffers certain disease. One of them is Jamu Purwaceng that is made from Purwaceng fruit (Pimpinella Pruatjan). Purwaceng is a fruit that usually live in an altitude of 2000 meters above sea level.

Jamu Purwaceng is good to keep your stamina and strength and most men consume this Jamu to keep their energy alive while working. While for women, there’s Jamu Kunci Sirih that has betel leaf and Temu Kunci (Boesenbergia rotunda) as its ingredient. This jamu will make your stomach tight after giving birth and lose body smell.

4. Jamu is shortlisted for World Heritage

In September 2015, jamu from Indonesia is proposed by Indonesian Ministry of Culture and Education as world heritage from Indonesia. This proposal is directed in internal organization who take care of educational and cultural issue in the world, UNESCO.

5. The Most Ancient Traditional Medicine

WHO (World Health Organisation) believes that 80% population in the world use jamu as their daily medicine. In Germany, jamu becomes one of three recommended medicines in their medical treatment. This happens because jamu is produced from dried plants which is good for healing many disease. It’s also believed that jamu is the oldest traditional medicine in the world.

Jamu contains an effect that could work profoundly, touching vital organs and help them work properly. It also could affect cells and strengthen their immunity which is good to fight antioxidant and free radicals.

This is also because herbal treatment could transfer genetic information to the deepest part of the body so that the healing could be more certain.

The reason why jamu can keep up their market is the geographical factor. Indonesian people mainly love to consume jamu as jamu is fit to their tongue as they have been familiarized by jamu since they were children.

Other reason is because jamu modernizes itself in the popular market. Some companies already produce instant jamu that’s more practical as it can be served by brewing the instant powder with warm water.

Other than that, to introduce jamu to youth, companies make hybrid product to approach them like combining traditional herbal ingredient with ice cream or putting it on a cup of tea and coffee.

There were also jamu companies in Indonesia who gave demonstration about the process of producing certain jamu, and gave the visitors information regarding the benefits of jamu for the body.

It was the first Jamu festival in Indonesia that might be happen again in the future. It was also a big festival that involved many actors from companies, universities, art performance groups, and government.

9. Jamu Helps Body to Produce their Own Antibody

According to Bryan Hoare, MesaStila manager, while modern therapy method and drink can help to prevent dangerous disease, they also has possibility to break cells in your organs.

Herbal drink serves different case. While it might be slower to heal certain type of disease, it can strengthen your body and help your body to produce its own antibody to fight antioxidant and free radicals. Thus, it can make your body stronger and immune to some diseases that could affect you some time.

Jamu Batok has basically the same element as traditional jamu merchant. You can find them in Yogyakarta, mostly in traditional market where local people, usually old woman, carry a crock containing bottles of coloured liquid.

The difference between jamu Batok with usual Jamu is its medium. Usually, ordinary jamu merchant will serve their jamu in a glass. However, jamu batok merchant uses batok as the medium. It’s made from coconut shell that has been dried and polished that makes it resembles to the function of the glass.

It’s quite popular among the people of Yogyakarta and it tastes better when it’s served on batok instead of a glass. You should try when you visit Yogyakarta.

Those are some facts around jamu, an ancient traditional herbal beverage from Indonesia. It has various taste as well as positive benefits to your body. Some people might add honey to make it sweeter. However, it’s unfortunate that newer generation isn’t really interested in jamu and other traditional beverage. The emergence of modern coffee and instant beverage in modern market interests young people more.

This is the challenge for both government and Jamu Company to attract new generation to be interested in jamu and other traditional beverage.