Indonesia has so many heritage which is impossible to resist to not take a look if you visit to Indonesia. There are so many histories left around all over archipelago. Not only in art and culture section, but also there are so many places which contain so many history that we can learn about then increase our knowledge. Usually, the thing we most like about Indonesia is starting with the history. If you want to feel the history, why don’t you try to visit these places?

The thing is, the historical buildings in Indonesia are pretty well maintained.So, if you curious, these are the places you can visit: 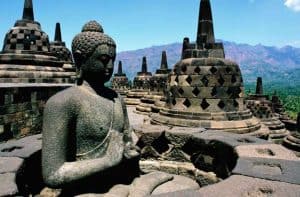 Borobudur temple is the result of collaboration between science of architecture and the unbeatable way of arts that built this temple as a giant pearl of Indonesia. Many people love it, including the people around the globe. That’s why, UNESCO made this temple as a world heritage.

Located on Menoreh Hills, Borobudur Temple becomes a marker of past glory. That once existed, in the land of Jawadipa stood the kingdom of Ancient Mataram that was rich and famous. The abundant produce and smart human resources make the kingdom of Old Mataram was able to build a gigantic temple known as the Borobudur Temple. 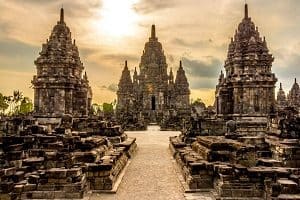 Prambanan Temple is a beautiful building, built in the 10th century during the reign of two kings, Rakai Pikatan and Rakai Balitung. Rising as high as 47 meters (5 meters higher than Borobudur Temple), the establishment of this temple has fulfilled its maker’s desire, showing Hindu success in Java. This temple is located 17 kilometers from the center of Yogyakarta.

There is a legend that Javanese people always tell about this temple.The legend of Roro Jonggrang. 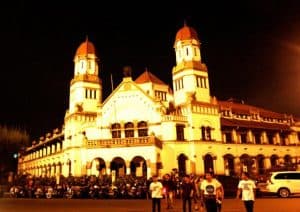 Lawang Sewu, or the ‘thousand’ doors, once an icon of a haunted building. Grief and ghostly appearances of female ghosts spreading across social networks, enough to create a frightening impression. But who would have thought, the building that was built in 1904 and completed in 1907 is actually part of the history of railways in Indonesia.

A building constructed by the private company Nederlands-Indische Spoorweg Maatschappij (NIS), which first operated the railway in the Dutch East Indies, to serve as its office. On the front hall, the old locomotive was located. This building is already transcribed into a railway museum. 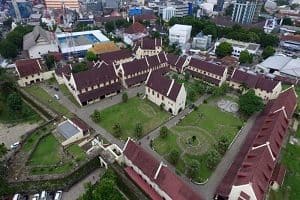 Fort Roterdam, the Fort that once was a witness of history in the past, the shape of a fortress that resembles a turtle, the people of Makassar used to call it the fortress of Payyua (Turtle Fortress) because the turtle philosophy that can live on the sea.

Fort Rotterdam is one of the oldest fort in South Sulawesi which considered as  aesthetic and charming fort in Indonesia. A New York Times reporter, Barbara Crossette once described this fort as “the best preserved Dutch fort in Asia”. At first this fort was called Jumpandang Fort (Ujung Pandang). 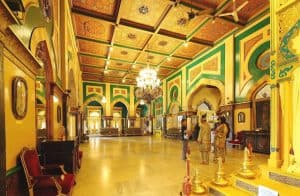 Since 1946, the Palace is inhabited by the heirs of the Deli Sultanate. In certain times, in this palace often show great performances of traditional Malay music. Typically, the performances are held in order to enliven the wedding party and other joy activities. 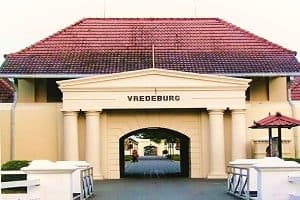 Vredeburg is a fort located in front of Gedung Agung and Kraton Kesultanan Yogyakarta. Now, this fort became a museum. In a number of buildings inside this castle, there is a diorama of Indonesian history.

This fort was built as the center of government and defense of the Dutch resident at that time, surrounded by a trench that some of its traces have been reconstructed and can be seen until now. This square-shaped fort has a bastion on all four corners. 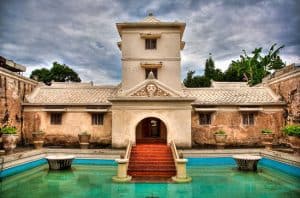 Taman Sari is one of the few precious historical treasures in the Yogya court. Now the area became a busy tourist site visited by people who are curious about the history of the building. No wonder if in the area there are tour guides who accompany tourists, they provide knowledge to visitors of the building’s function in the past.

This tourist attractions in Jogja which has an initial area of ​​10 hectares has 57 buildings, bathing pools, suspension bridges, water canals, and artificial lakes along with artificial islands and underwater aisles. Now the area of ​​Taman Sari Jogja is drastically reduced because some of its complex have been used as residential area. 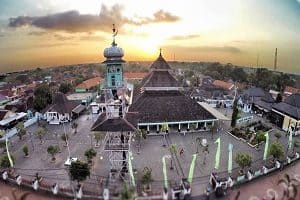 Demak became the location for the mosque which became one of the da’wah center of Islam in Java, namely Demak Great Mosque. The mosque was supposedly built by Raden Patah and Wali Songo in just one night. Demak Great Mosque is in Demak, Central Java, precisely in front of the square.

When visiting, in addition to worship visitors can also pilgrimage to the Muslim tomb in the area of ​​the mosque. There are tombs of Raden Patah, Sheikh Maulana Magribi and others. In addition there is also the Great Mosque Museum Demak visited every Saturday-Thursday at around 08:00 until 16:00 pm. 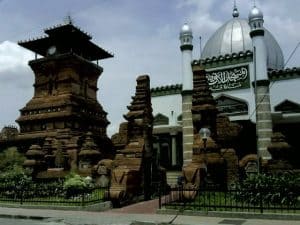 History of the spread of Islam in the archipelago is very closely associated with the Sunans. There are two Sunans who live in Kudus, namely Sunan Kudus and Sunan Muria. In addition to leaving the legacy of Islamic tradition, Sunan Kudus also passed the mosque which is now 468 years old. The mosque has a temple-shaped tower.

In addition to being a place of worship, the Tower Mosque became a symbol of hundreds of years of experience managing the ethnic and religious diversity of the Holy community. In addition to having the oldest minarets on the island of Java, Tower Mosque is also decorated with thick ornaments with nuances of articulation of Hindu, Buddhist, Javanese, and Chinese culture. 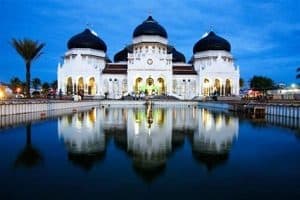 This is the most good looking mosque in Indonesia. As you can see, the perfect time to tell it is when the sun comes down. You can see the mosque’s glittering reflection on the water surface. Baiturahman is a pride for people in Aceh. Thanks to its great architecture, the mosque still stand firmly until now. 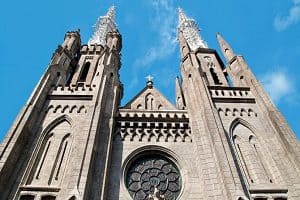 Before it was inaugurated as a cultural heritage, the construction of the Cathedral Church began when Pope Pius VII appointed Father Nelissen as the Dutch Indies apostolic prefect of 1807. At that time, the missionary deployment began, including in Jakarta. In 1808, Father Nelissen and Father Prinsen arrived in Batavia through the Fish Market Port.

In general, the Cathedral Church building is characterized by European style of neo gothic. Built by an architect named Ir MJ Hulswit, the cathedral church building features towering doors and many windows. 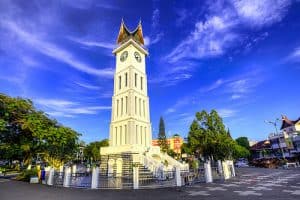 Have you ever heard or seen directly Big Ben in London? Or if you can not go there, you do not need to worry because your curiosity may be a little treated with the “Big Ben” of Indonesia located in the city of Bukittinggi, West Sumatra, the one and only Gadang Clock. 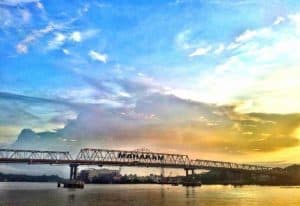 The Crown Bridge 1 or often we call it the Mahakam Bridge. built on the waters of the Mahakam River that connects the area of ​​Samarinda City with Samarinda Seberang sub-district. This bridge is very often passed by vehicles from and headed outside the city of Samarinda. This bridge was built in 1987 and inaugurated by President Soeharto. And now the bridge will have a friend, right beside this Mahakam Bridge named Twin Bridge. 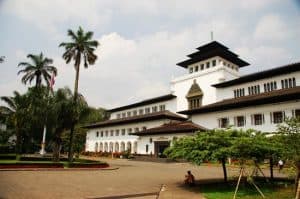 You could say, the holiday to Bandung is not complete without a visit to Gedung Sate. This building located in the middle of Bandung is indeed unique. Especially one part of the building, which is a similar ornament skewer that is at the top of the building.

This building can be regarded as the most typical icon in Bandung. Gedung Sate is still used actively for the activities of the government of West Java Province, but also as a tourist attraction from the city of Bandung. 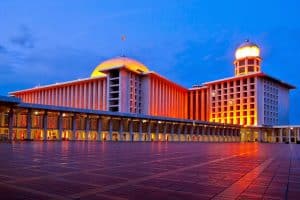 Istiqlal Mosque is one of  largest mosque in Indonesia. It was built as a manifestation of gratitude for the independence of the Indonesian nation. This magnificent modern architectural mosque turned out to be architected by a Protestant Christian named Frederich Silaban. The man born in North Sumatra was designated as the winner of the Istiqlal Mosque design contest (1955) at that time the jury was chaired by President Ir. Sukarno with members of architects and scholars.

Istiqlal is taken from the Arabic language meaning independence. This mosque is built to honor the fallen Muslim fighters in fighting for independence as well as expressing gratitude to God. 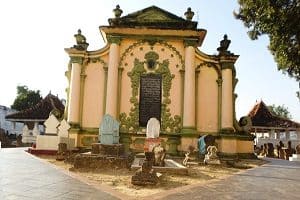 The Asta Tinggi tomb is the cemetery of the Sumenep King and his descendants who are in Sumenep District precisely in the highlands of Kebon Agung. In the language of Madura, Asta Tinggi is referred to as Asta Rajâ which means the tombs of the Pangradjâ or the Kingdom-makers of the tomb. 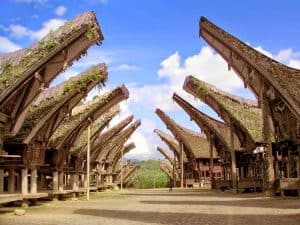 In general, tongkonan houses have a stage structure with round poles supporting rows of buildings. The pillars hold the floor, walls, and roof that are not planted in the ground, but directly superimposed on large stones carved to square.

That’s it, those are the places included in the list of 17 Historical Buildings in Indonesia. If you really love Indonesia, you should love it by its history first. To feeling the history more direct and clearly, you can visit those places mentioned above to give the feeling of entering the history itself.

Best Places to Camp in Indonesia