East Java is one of the provinces in Indonesia. This province is located in the east of Java where close enough to Bali. Because of its strategic location, some tourists would decide to visit East Java.

The capital city of this province is Surabaya which also becomes one of the destinations for the tourists. However, there are still a number of most visited cities in East Java such as Malang and Kediri. Besides has the beautiful view of scenery, there is also some historical building in East Java you need to know. 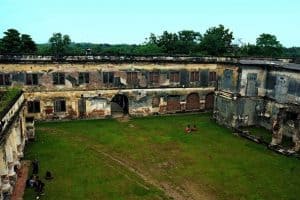 The name of Benteng Pendem was built for six years from 1839 until 1845. This fort was built by Van Den Bosch, as the Dutch defense to ward off the Indonesian guerrilla attacks.

Inside the building, there is a cave that connects the fort with the river flow of Bengawan Solo.

There was also a cave that built to escape from the pursuit of the enemy.

Inside the Benteng Pendem there is also a very narrow prison space. The detained person can only sit and can’t stand on that prison. Benteng Pendem began to open to the public since 2012. This fort has an area of 165 meters x 80 meters. In the location of the building there are several large rooms such as bullet storage, boardroom, kitchen, up to a very wide parking lot and can accommodate hundreds of vehicles. 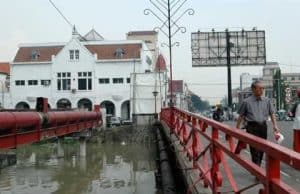 Formerly, the Red Bridge was the place where the traders from various countries such as China, Europe, and Arabs made the transactions. It also used as a transport line VOC (Vereenigde Oostindische Compagnie).

The Red Bridge also witnessed a battle between the youth of Surabaya and the Brigadier General Mallaby troops that ended with the death of Brig. Gen. Mallaby. Initially, the bridge used a wooden fence as a barrier, but now it has been using an iron fence.

The red color on the guardrail is still used to commemorate the bloodshed that has happened during the war of fighting for Indonesia independence.

Still in Surabaya, there is a historical building that you could see named Majapahit hotel. Formerly, the hotel is on Jl. Tunjungan no. 65 and was named Hotel Yamato.

Hotel Majapahit witnessed a lot of bloodshed caused by the incident dirobeknya Flag of the Red and White Blue Netherlands to Flag Merah Putih Indonesia.

No wonder hotel is always used as a place to remember the young Indonesians who have struggled to the death. Until now, Hotel Majapahit still exists and has developed into five-star hotel in Surabaya. In order to create the atmosphere of Dutch colonialism, this hotel still maintains its Dutch colonial architecture. 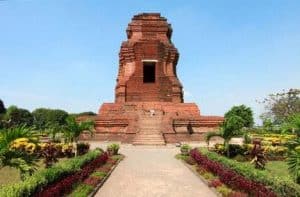 Right in front of the East Java Historical and Archeological Sanctuary office located on the Mojokerto-Jombang highway, there is a narrow north entrance.

However it has been paved. Brahu temple is located on the right side of the small road, about 1.8 km from the highway.

From the relief, this temple is a picture of religious syncretism between Hinduism and Buddhism. At first this temple serves as a burning place of the kings of Majapahit. However, such assumptions are not proven. And with the picture of the syncretism, until now Brahu temple maintenance is done by both religions, Hindus and Buddhist. 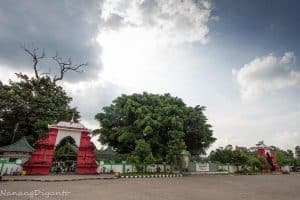 Still in Mojokerto, you could find one of Historical Buildings in Indonesia as the relics of Majapahit Kingdom.The site of Troloyo’s tomb complex is located in Sentonorejo Village, Trowulan District, Mojokerto Regency.

This site is a burial complex of Islam in the days of Majapahit Kingdom. The site of Troloyo’s tomb has undergone several restorations so that it loses its distinctive features as an ancient relic of the Majapahit Empire.

Through the Troloyo site, it would strengthen the preservation of cultural diversity and religion in Majapahit and the tolerance of religion with one another. Imagine, this site is located not far from the Temple Kedaton and site Floor Segi Six which is essentially the environment of the City of King Majapahit. Formerly this complex is just like a fern forest if it was seen 2 kilometers to the south. 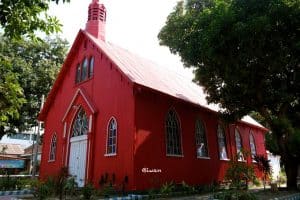 The Red Church is located at Suroyo Street, Mayangan, Probolinggo, East Java. It still stood very solid. The church is often visited by foreign tourists from Australia who boarded from a yacht. It is said that the existence of this oldest church, made in 1862.

This Historical Place in Indonesia becomes the attraction of visitors who want to see more closely the Dutch Colonial relics of this church.

On religious holidays, such as Christmas and Easter, the Church is always packed with visitors from abroad, from the Netherlands, England to Australia. They are on average curious about the splendor of buildings that are almost 100 percent made of iron and steel. In fact, this church is only two in the world, one is located in Denhag, Netherland and another one is in the city of Probolinggo, Indonesia. 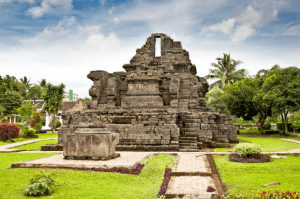 Because of its location in the Village Tumpang, this temple is often also called Tumpang Temple.

Locals call it Cungkup. Giving the name of the temple by Jago is not arbitrary.

The word of Jago was taken from Jajaghu which has the meaning of grandeur. Jago temple filled with relief panels which are sculpted neatly from the foot to the wall of the top room. The construction of Jago Temple is closely related to the death of Sri Jaya Wisnuwardhana. In accordance with the religion adopted by King Wisnuwardhana, the Shiva of Buddhism, the reliefs on the Temple Jago contain Hindu or Buddhist teachings. 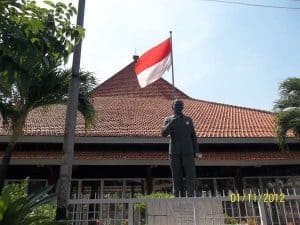 This historic building is located right on the edge of the road, fenced with iron gates as tall as an adult’s head. There did not seem to be a guard when we entered this rather large building complex.

At the front there is a statue of Dr. Soetomo, standing facing the road with his back to the vast pavilion.

Indonesia National Building Surabaya is a historic place in the City of Heroes, Surabaya that can’t be separated with the important activities and roles that donated by Dr. Soetomo in the political movement to fight for independence.

The museum that still maintains this ancient building form is a public museum containing various historical objects in Banyuwangi, ranging from sacred objects, art objects, household equipment, and others.

Built in 1977, the establishment of this museum is an initiative of the government of Banyuwangi Regency who wants to preserve the culture of the city.

The museum is now located in the area of Culture and Tourism Office of Banyuwangi contains about 500 historic collections. Among the collections are typewriters, gobok money, Banyuwangi batik, ancient phones, and various ethnographic, archeological, and many other collections. 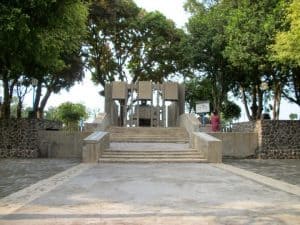 Petilasan (relics) Sri Aji Jayabaya is a place of king monarch from Kediri kingdom, that is King Jayabaya. In addition to being the King of Kediri in the XII century, Jayabaya is also famous for the book “Jangka Jayabaya” which contains about the predictions of events in the future. This historic site located at 15 km from downtown Kediri.

Like a historical place, this relics often visited by many people that want to see some relics such as, Sendang Tirto Kamandanu, Palinggihan Mpu Mharadah and Totok Kerot Statue. In addition, many also visited for pilgrimage, with the peak of the visit occurred on 1 Suro, on the Java calendar.

Those are the historical building in East Java. Most of historical buildings are always be crowded in the weekend and holiday. However, it such a terrible thing that knowing people’s come just for taking some pictures without learning any history on it. Therefore, make sure to learn the history if you visit on of them.