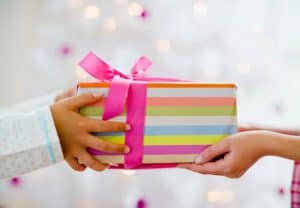 When you appreciate someone, you would like to give them some gifts that may he or she likes. It is normally happen in human being and social life. When you want to give a gift to someone, you had better notice whether it is a suitable gift or not.  People in several country could not accept some kinds of gift because of their culture or religion.

Most of people around the world has the tradition of gift giving. If you have already been familiar with gift giving on christmas day, you should read these following gift giving etiquette in Indonesia. Because Indonesia has the diverse of ethnic and religion, it would better for you to consider the recipient of the gift before you gift giving.

Gift Giving for an Islamic people in Indonesia

The majority people in Indonesia follow Islam as their beliefs. If your recipient is Islamic people, you should consider what they may eat and drink.

A number Indonesians are originate as Chinese ethnic, it will be better for you to consider what you should do and not do while giving them some gift.

Avoid use white, black, and blue paper to wrap your gift. When you wrap the gift well and elaborated, they will consider your willingness to give a gift. They will also think you are polite. It would better for you to choose red or gold wrapper and they will considered it as an auspicious gift.

When you give a gift for Chinese, they will probably verbally refuse your gift at least three times. It is considered as polite and not greedy. When they accept your gifts, tell them how happy you are with their acceptance.

On Chinese New year, giving “Angpao” (some money) is already well known in Indonesia. Give money for the children and people that you are closed to them. Don’t give money to government employees because the will refuse it. The money should be presented in a red envelope.

Have you ever visited a hotel which has no 4th floor when you use elevator? It is because Chinese believe that 4th is a bad luck number. When you want to give something as a gift, make sure there is no number 4 on it. Don’t give any goods in 4 numbers or you will be considered as sending a bad luck to them.

When you visit Bali, you would find a lot of Hindus there. If you want to send them some gifts, you should considerate these followings things:

Those are some etiquette of gift giving in Indonesia. Now, you have known what you should give to the recipient. Have you found any idea for giving your Indonesian colleague or best friends? If you want to know more about other Indonesian etiquette, feel free to visit Etiquette of Communication in Indonesia.