History of Catholic in Indonesia 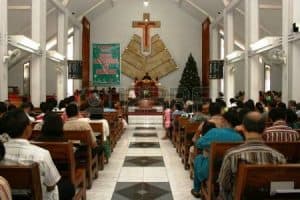 The reason why Mattiussi came to Indonesia was because he was sent specially by the Pope to reach Asia. In 1318, he began his journey by leaving Padua. He traveled the Black Sea, Persia, and Calcutta all the way to Sri Lanka. He reached Nicobar island and made his way to Sumatra. Java was the next place he visited which was then continued to Banjarmasin.

The mission was meant to study about the different regions in Asia. There was no Catholic church in Asia at that time. The dominant establishment was Hinduism and Buddhism. By travelling all over Asia, the church can gain more information about it. After carrying out the mission, Mattiussi went back home to Italy in 1330. He decided to travel by land crossing Vietnam, China and the famous silkroad located in Europe.

In the year of 1511, the Portuguese era started and they sailed to the eastern part of Asia. They were on the search for more kinds of spice. Unfortunately, they got captured in Malacca. During the time of their capture, the Catholic missionaries arrived in Malacca. The missionaries were led by Francis Xavier. The Portuguese continued their journey to Maluku Islands. They arrived in the year of 1534. They had a mission which is to convert the native people of Maluku Islands to Roman Catholicism. However, they were also aiming to gain spices that originated from the region.

Francis Xavier arrived there too between the year of 1546 and 1547. He visited the people who lived in Ambon, Ternate and Halmahera. He then proceeded to baptise many of the locals there. Francis Xavier hoped that it will be a good beginning for the Roman Catholic church. Francis Xavier left the Maluku Islands shortly after 1547.

Other people continued Francis Xavier’s work. They carried on his legacy right into the year of 1560. By then, there were so many Catholics in the region, especially in Ambon. Approximately, there were around 10,000 locals who were converted into Catholics. However, when the year reached 1574, the Portuguese were expelled from Ternate. This caused many catholics in the region to die. They were either killed or told to convert to Islam.

Things began to get better and in the year 1590 there was an increased number of Catholics across the Maluku Islands. There were 50,000 or 60,000 Catholics in the region. Most of the Portuguese priests successfully converted many locals in Solor and reached 25,000 Catholics in total. Cornelis de Houtman sailed to the eastern parts of Indonesia at the year of 1595 with a mission. He was the first man from Dutch to reach those regions. The exploration mission was not entirely successful. He mainly came to Indonesia to to obtain spices. His arrival to Indonesia will later influence the history of Catholic in Indonesia.

The VOC (Dutch East India Company) was in full formation within the year of 1602. Since government system in the Netherlands was heavily influenced by Protestantism, the VOC were also affected. There were a lot of Dutch Catholics at that time but they did not have the same influence as the Protestants. In 1605, VOC came to Ambon and dominated the region. There were many Catholics there. All of them were pressured to convert into Protestantism. The domination continued to Manado. They even reached the islands of Sangihe-Talaud.

In 1613, the Dutch successfully conquered Solor of the Flores island. They were actively spreading the teaching of Protestantism. The Catholic mission could not do anything. But they persevered and continue their mission within other regions of Flores island and Timor. There were still some areas left where the Portuguese can have control.

The Protestant priests successfully influenced many territories in Indonesia. They came specially from the Netherlands to replace all the Catholic priests in a lot of regions. As a result, plenty of people also converted to Protestantism. On the other hand, the Catholic priests faced a trying time. They were threatened if they ever dared to cross the territories of the VOC. Father Egidius d’Abreau had to face death for defying the rules set by the VOC. In 1624, he was killed in Batavia because during his time in prison he was celebrating Mass.

Father Alexander de Rhodes was a French Jesuit who also faced the VOC strict rules. His cross and accessories for Mass was burned to ashes under two hanging, dead bodies of thieves. He was exiled from the VOC territories in the year of 1646. There were raging wars across France and the Great Britain. Their allies were also involved in the warfare. The wars caused a division among the Netherlands. They were no longer in unison. Consequently, the Netherlands was no longer independent. The year 1799 came and the VOC filed for bankruptcy. They were disbanded and no longer exist.

Under the command of Louis Bonaparte, Louis Napoleon rose to claim the throne of the Netherlands in 1806. Louis Napoleon was a Catholic. In the year of 1808, H.W. Daendels allowed the Catholics to have the freedom of practicing their religion in the Dutch Indies. Daendels was the Governor General at that time. The freedom was later supported by Thomas Raffles.The Catholic religion flourished in the Netherlands. There was an improvement in the freedom of religion.

Larantuka which is situated in the island of Flores became the main focus of the Catholic Church. The reason for that is because of the treaty made by Portugal in 1859 that settled conflicts among the regions and allowed religion freedom in the areas. Other than Larantuka, West Borneo, Bangka, the islands of New Guinea and Bengkulu were also under the influence of the Catholic Church. By then, most of the locals in Batak had also accepted Catholicism.

By 1900, Frans Van Lith built a school named Normaalschool in Muntilan especially for teachers. In 1904, he added another one called Kweekschool which was also for teachers. On the same year, four chiefs from Kalibawang came to Frans Van Lith’s house. They asked the priest to teach them about the Catholic religion.

At the end of 1904, 178 Javanese in Semagung were baptised. The ceremony was held in the middle of two trees that go by the name of Sono. Now, the place is called Sendangsono near the province of DI Yogyakarta.

By the year 1918, the Roman Catholic established Yayasan Kanisius. It was there where the first batch of Indonesian priests and bishops was taught. In 1940, Indonesian had its first native bishop named Albertus Soegijapranata SJ. Following Indonesia’s independence in 1945, the Catholic Church began to flourish all over in Indonesia. The growth experienced a drastic increase in the year of 1965 when Sukarno was overthrown.

Through all the trials and tribulations, Catholicism was successfully established in Indonesia. Even becoming one of the officiated religions in Indonesia. It has brought positive influences to many people in Indonesia.