History of National Exam in Indonesia 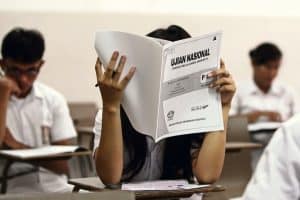 National Exam in Indonesia which is abbreviated  as UN or UNAS is a student national assessment before the graduation for primary and secondary education. The lessons for UN are usually the typical lessons which are generally studied by all of the students in Indonesia like Math, Bahasa Indonesia, English, and some other Sciences. The test for the students in National Exam is made by some experts under control of Department of Education. The government has already established National Exam since so many years ago. Thus, we would like to share the informations about the history of National Exam.

In this period, the examination was called as “Ujian Penghabisan” (the Finalof examination). The ministry of Education, Teaching, and Culture made all of test into essay. All the students had to write manually their answer of the test. Because it was essay test, it was need many sheets of paper to answer the question.

The National Exam in this period was famous as “Ujian Negara” (country examination). The schedule and the place of examination were determined by the Central Government. The material for the exam was all of lessons that had been taught at school.

The central government during this period arranged the direction of National exam generally. Each school or a group of school did independently the examination which location and schedule had been arranged. They also determined the result of exam by themselves.

In this era, the name of examination was UAN which was the abbreviation of Ujian Akhir National replaced EBTANAS. The standard of the passing grade was significantly changed year by year. In UAN 2002 the passing score was determined by each lesson individually.

In UAN 2003 the score for each lesson should not less than 3.01. The minimum average score of the sum from all lessons was 6.00. The test for UAN was made by Depdiknas (The National Department of Education). The school element could not create or even change the mark. The students who didn’t pass the exam could have a remedial a week after UAN.

Meanwhile in UAN 2004, the graduation was determined from each mark lesson. The score must not be less than 4.01 and there was no minimum average score. There was also a remedial for the students who didn’t pass the exam.

In 2005s was the time when UAN changed into UN (Ujian Nasional) with the same regulation in 2004. The passing score raised to 4.25. The students who didn’t pass UN part I could join UN part Part II.

The minimum score must be more than 4.25 for each lesson with the minimum average score was 4.50. There was no remedial for the student who didn’t pass the exam.

There was no remedial. The students who could not pass the exam should take ‘UJIAN PAKET A, B, C’ (the special final exam with some regulation) to continue the study. If they would not take Paket A, B, C, they could join UN in the next year).

If the students wanted to pass UN in this year, they should reach minimum 5.50 for the average score, with the minimal score was 4.0.for two lessons only and 4.25 for other lessons. Vocational High School Students had to reach 7.00 for their score in vocational practice.

The minimum average score was still the same in 2010. There were 5 packages for the test. The students in a class could get the different package of the test. It was aimed to minimize cheating among students.

The curriculum issues happened in this year. There were many pros and cons of changing curriculum in K13 (Curriculum 2013). There was also an issue that UN will be removed. However, UN still exists up to now.

If you read well the history of National exam in Indonesia, it was really dilematic and problematic, right? It was full of regulation that always changed every year. Moreover, the government is doing a research whether national exam is effective or not. In conclusions, the system of education in Indonesia is still on process of developing. If you want to know more about education system in Indonesia you could visit Indonesian Education System.