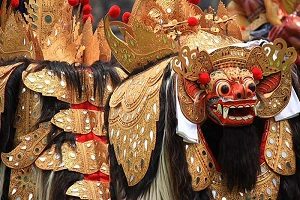 According to Balinese belief, Barong Dance is also a sacred art so there is also a mystical impression in it. However, this dance that is quite famous in Bali. (see also: History of Plate Dance) Besides having artistic value, Barong Dance also has spiritual meanings in it.

Barong Dance also can be an entertainment for the community. For Barong Dance that is displayed as part of the ceremony at Pura, it is usually done seriously. Because it relates to the existing spiritual meaning so that it is done sacredly. While Barong Dance is displayed for entertainment, it usually interspersed with funny scenes. In addition there is also an attractive appearance of dancers such as “immunity” shows that make the audience amazed. (see also: Reog Ponorogo Dance)

After seeing the general information about this magnificent dance, lets also take a look at these useful informations below : 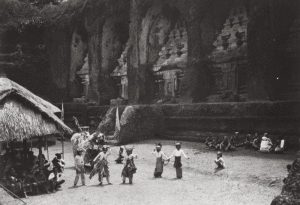 The origin of Barong Dance is still not known for certain, but there are several historical versions that tell about the history of the early formation of this Barong Dance.

The first, is Hindu mythology that explains that the barong is taken from word “Bahruang” in Sanskrit. Bahruang is an animal considered to have supernatural powers and is often referred as a protector of goodness. (See also: Balinese Dance)

There is also a mention, that Barong Dance was originally a manifestation of the ruler of the spirits in Bali. At that time, the Balinese people use this Barong Dance to repel the disturbance of supernatural beings that exist there. (see also: Saman Dance)

Although many versions mention the history of Barong Dance, the people of Bali still believe that Barong Dance is a legacy of ancestors who are considered sacred and have spiritual values ​​in it. (see also: Indonesian Angklung Facts)

However there’s one history that said, Barong bali believed to be a metamorphosis of barong ponorogo or Reog. Brought by the king Airlangga while fleeing to the island of Bali to save themselves. Besides barong ponorogo brought to Bali, there are also literary arts, java script, and religions. In the development of barong ponorogo changed into fox shape and the story also changed according to the condition of society in bali devoted to spiritual spiritual activities. (see also: Balinese Wedding Traditions)

The influence in barong Bali can be seen on the form of barong ponorogo when appearing without the crown of peacock (Kucingan) and on the mask Rangda which gets the influence of mask bujang ganong. As well as groups of people who explore the  spiritual power in the family who have an influence. Influence on the behavior of real activities of young warok and old warok who has great magic is currently still found in Ponorogo, although the activity is currently closed to certain circles. That way, there are types of barong bali with various animal heads such as Pigs, Elephants, Dogs and Birds which became the pride of every city in Bali. (See also: Traditions in Bali) 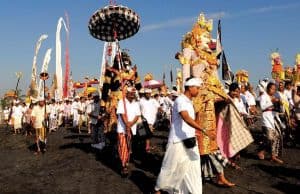 The Balinese believe that these spirits are the accomplices of Queen Gede Mecaling. She was the ruler of the unseen nature of the Southern Ocean of Bali which is located at Pura Dalem Ped, Nusa Penida. (see also: Ngaben in Bali)

At that time, a powerful priest advised the community to make a statue that resembles Queen Gede Mecaling, whose figure is high, black and fanged, then parade it around the village. Apparently, this trick works. The spirits are frightened to see their boss’s imitation form, then back away. Until now, in many villages, people periodically paraded Barong Landung to ward off disasters. 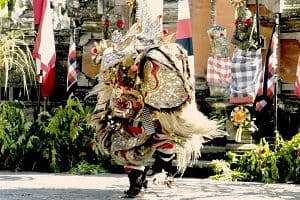 In the Barong Dance show, dancers wear costumes and masks depicting embodiments of animals or giants that are believed as protector. In Bali itself there are several types of Barong Dance commonly displayed such as barong ket, barong bangkal, elephant barong, barong asu, barong brutuk, barong land, barong tiger and barong kedingkling. Each type of barong is certainly has a story and different  dance technique. (see also: Bali Facts)

However, the most often shown for the tourists is Barong ket, because it has a complete costume and dance. In this barong dance, the dance is packed in a traditional drama or story that tells about the eternal struggle between good and evil. (see also: Bali Tribes)

On the other hand, this barong ket dance is usually performed with a humorous interlude that can keep the audience entertained. It is also accompanied by Balinese Gamelan that makes the show more festive and more alive. (see also: Bali Myna Bird Facts) 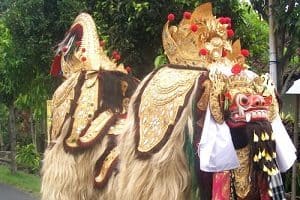 On the body, is decorated with ornaments of leather, pieces of glass or mirrors, and feathers made of pandanus fiber or crow hair. While on the head using a mask made of wood. The wood used to create a mask Barong Dance is a special wood which is usually taken from a haunted place. That’s why the Barong Dance is considered a sacred object.

Development of Barong Dance in Bali 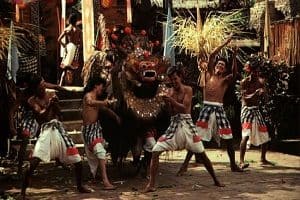 Barong Dance is a traditional dance that is quite famous in Bali. In its development, this dance is now not only performed for local people in certain events, but also featured in various tourism events. Apart from being part of the tourist attraction, it is also a form of Balinese business in preserving their traditions and culture. (see also: Largest Ethnic Groups of Indonesia)

There’s a community that always shows this special Barong Dance to the tourists, domestic or even foreign. That community is known as Sahadewa. In the Sahadewa Group, the show starts from 09.30 WIT every day.

Meanwhile, if you do not use travel services that have include this shows in the tour package, then you can buy the ticket for Rp 100,000. (see also: Traditional Market in Indonesia)

The one-hour performance tells the story of a fight between good and evil against evil. Barong beast is an ancient animal of symbol of virtue while Rangda is a creepy creature symbolizing evil / falsehood. A concept of Rwa Bineda, a never ending battle that can not be separated in life. In the last part is shown Keris dance wrapped by “immunity actions” of the dancers. (see also: Customs of Indonesia)

A number of dancers who brought a dagger thrust it into their body. This action is the main attraction for foreign tourists. However, Sahadewa Group has been established since 1981. Most of them are local residents who have a profession as a dancer and arts performers. Its really worth to check them out.

Finally, that’s it, all you need to know about Barong Dance, especially its history. Okay, enjoy it and have a great day !