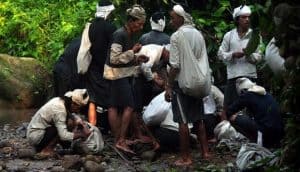 The Baduy community has always adhered to all the customs and rules set by their Pu’un (Head of Customs). Compliance with these customs is an absolute standstill rule to live together. Baduy tribe in general has divided into 3 villages, such as: Cibeo, Cikeusik, and Cikertawarna. In addition, driven by strong beliefs, almost the entire Baduy communities have never opposed or rejected the rules that Pu’un (Leader of tribe) applied.

By living life according to customs and rules established by the Chief of Customs there, created a community with a very peaceful and prosperous society. In Baduy society, there is no rich people, but also no poor people. Their life, essentially, just like other people’s lives. It’s just that what sets it apart is so many traditional rules that seem old-fashioned that they must obey.

There are some customs which still exist in Baduy tribe until now, such as:

1. The Etymology of Baduy Community

The name Baduy is actually given by people outside the baduy community itself, actually from the researchers of Dutch whose think that Baduy is more or less than the tribal community in Saudi Arabia. Also, another thing is due to the Baduy Rivers that exist near their area. However, they are much pleased to be called by the name of the territory in their possession, Kanekes. The name Baduy is rather “odd” to them.

They speak sundanese pretty good. But they also good at Bahasa Indonesia when communicating with other outsiders. The Kanekes not knowing the writing culture, so the customs, creeds / religions, and ancestor stories are only stored in the speech only. The thing is, they don’t want any of school buildings built in their area to teaching children, because the teaching is the opposite of their customs. They still don’t have the same perception till now. And that’s why, many of them neither can write and read.

The Baduys have a historical relationship with the Sundanese. Although they are pretty much the same with Sundanese in physical, their way of life and beliefs totally different. They want to keep their traditions and customs, and protecting them self from outer world, and the Sundanese, the opposite of that.

There are three groups that exist in Baduy Community named first is tangtu, then dangka, and panamping. Tangtu group is well known for keeping the traditions strictly, and that’s why they were called The Inner of Baduy, the customs keepers. Although Baduy always respect their customs, but this group is something else. Their clothing show their characteristic, which has darkish sense on the inside, and the white bright on top. They are prohibited by custom to meet foreigners.  (You might want to see : Balinese Wedding Traditions)

4. The Legendary Mythology of Baduy

They believe that they are the descendants of the great Batara Cikal, which is one of the sevengreat gods on earth.  The origin is often also associated with Prophet Adam as the first ancestor. According to their beliefs, Adam and his descendants, including the Kanekes, have an ascetic or ascetic duty (mandite) to safeguard world harmony.  (Read also : Flag of Indonesia – Indonesia Military Power).

But the confusing thing is, their origins is seems to be differ from one historian to another. They have different concept and opinion about the origins of The Baduy Community. But they used convincing evidences, so they think they were right, we don’t know. The Kanekes community is associated with the Sunda Kingdom that before its disintegration in the 16th century centered on Pakuan Pajajaran (around present Bogor).(See also: Natural Disaster in Indonesia)

The religion that exist in here is actually the teaching of Sunda Wiwitan, the religion built long time ago in the old ages and suggesting the way to pay respect and worshipping the spirits in this world. Although most of the aspects of this teaching are the original hereditary traditions, in later developments the teachings of this ancestor are also slightly influenced by some aspects of Hinduism, Buddhism, and later Islamic teachings.

The form of respect for the spirit of this natural force is realized through the attitude of preserving and preserving nature; Taking care of the environment (mountains, hills, valleys, forests, gardens, springs, rivers, and all ecosystems in them), and giving their highest esteem to nature, by treating and protecting forests as part of an effort to maintain a balance of nature Universe. 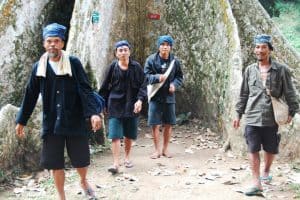 Clothes of baduy tribes as well as their community groups, each community group actually has the same custom clothing but is distinguished by the colors worn. For clothing worn among Baduy women in and outside Baduy not too noticeable differences are striking. Models, cuts and colors of clothing, except clothes are the same. They wore a black glossy sarong of heels to the chest.(See also: Hinduism in Bali )

Clothing like this is usually worn for everyday clothes at home. Married woman, usually let her chest open freely for the loveof their husband, but the girls must closed their breasts. For traveling clothes, usually Baduy women wear kebaya, woven sarong sarong blacks, karembong, belts and scarves. The color of the shirt for the Inner Baduy is white and the base material is made of cotton yarn woven by itself. Here is the clothes worn by a man in baduy society.

The procession of marriage in baduy society is almost same with society in general, only in baduy society married couple with matchmaking, at first male parent will stay in touch with the woman’s parents and introduce their respective child. Once the aggreement achieved, they must do the three steps of weeding to complete it.

The first step, the parents of the groom will go to the Jaro, who is the head of the village, with the leaves of betel nut.  The next step, in addition after bringing the things needed, they will use a white steel ring as a dowry. Finally, preparing tools for household needs, clothes and wedding ceremony for the women.

The Baduy keep their traditions strictly more than others. Those traditions are: 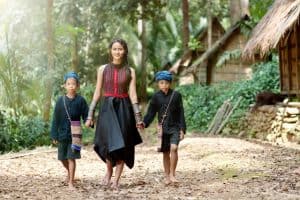 Just as in a country where there are law enforcement officers, the Baduy Tribe also has its own field that is in charge of punishing the exposed people. The penalties are subject to the category of offenses, which comprise serious violations and minor offenses. 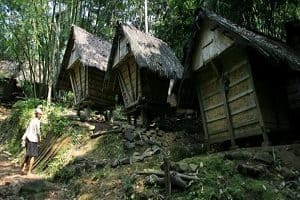 The Baduy In Society is performing a fast called Kawalu. At this time Kawalu, people from outside the Baduy Dalam community are strictly prohibited to enter their territory. This is one of the indigenous provisions of Baduy Dalam, they must undergo fasting which they called “Kawalu”.

At Kawalu, there are many customary activities and no other activities. All activities are focused on Kawalu procession. In this month they are not allowed to fix houses or selamatan – selamatan but prepare to welcome the coming of the big day for Baduy people called Seba, the end of Kawalu.

They didn’t use the way of politics in their daily life. Is there’s a way near politic, maybe is the way of choosing their great leader. Usually, they pick someone who is old and wise enough to carry their tribe into a successful one. Beside that, there is no other politics. Even they don’t have a way to promote the leader of they desire. That is the opposite of their ideology. Because of it, they dislike it.

The Baduy Tribe is still standing firmly in their way of life. They still doing the daily activities with a grace and respects to their culture. And still, the Baduy Tribe is more open to the tourist now. More cheerful too. That’s why, the Baduy Tribe is also known as a friendly tribe. Because of their attention upon greeting the tourist and the outsiders. The way of making friends and peace is so strong in this tribe.

Other Facts of Baduy Tribe

In addition, there are also some interesting facts about Baduy people, such as:

And thats’ it, the culture of Baduy. Its very special indeed. With tons of customs and traditions, they want to stand firmly to keep them save. There’s no one like Baduy.