10 Most Famous Dance in Bali

Bali is an area that can be considered Mexico Indonesia. The island is usually called the Island of the Gods has many natural scenery that has been recognized internationally. In addition, Bali is famous for its cultural diversity, one of which is traditional dance. The Balinese Dance is one of the cultural forms which often exhibited in their society order as a form of self-expression and certain purpose. Bali, known as God of the Island as its name, is known to have various dances. Here are the ten most famous dances in Bali. 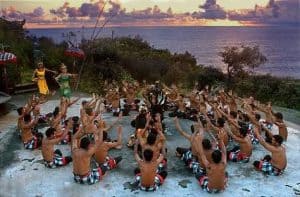 Kecak dance in Bali is one of the many Balinese dances that are well known by the wider community to the world. Kecak Dance itself is a dramatic played by 50 to 60 dancers who are mostly male dancers. Characteristic of this dance can be viewed from the dancers who move their hands up while crying out the sound “cak, cak, cak” simultaneously and continuously, to produce a harmonious rhythm. Initially, Kecak Dance was part of the Sanghyang Dance (religious ritual dance). However, around the 1930s, this dance became a show by relying on the epic story of the Ramayana as a play. 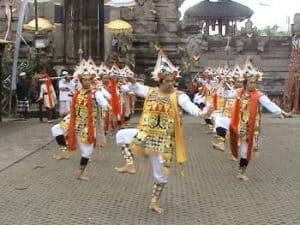 As the name suggests, Baris Upacara dance is known to be synonymous with dances dedicated to the kingdom. Originally, this dance is a sincere offering of praise to God in Bali (Ida Sang Hyang Widhi Wasa). It is said that when there is this dance performance, the Gods come to dance with their own style. Ritual Dance is not a dramatic play.

However, it is used as a heroic dance. It can be seen from his marching movements like a marching troop line performing the ceremony. It is pretty interesting, right? 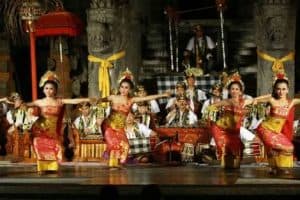 Some cultures in different regions must have a dance to welcome the guest or visitors. It also happens in Bali, such dances are represented by Pendet Dance. No wonder, such as there are important guests such as guests visiting the country visiting Bali for example, this dance is never missed to be performed in front of the guest.

Initially, this dance is often performed as a cult dance that is always displayed in every majo r temple in Bali. The philosophy behind this dance is not far from worshiping the descent of the gods to the world. 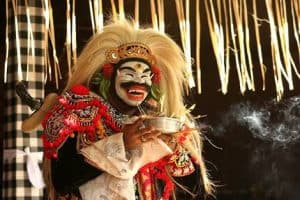 Topeng Sidakarya is a dance type that contains elements of religious rituals. Even so this dance is still interesting to watch, because the dance is performed by male dancers who wear white mask, slanted eyes, bucket teeth, long shoulder length hair, and wear white veil used as a talisman. Topeng Sidakarya Dance is believed to be the perfect dance of a religious ritual.

So, no wonder if this dance is always staged shortly after the Hindu Bali religious ceremony is completed. Interestingly, some of the Topeng Sidakarya Dance movements teach ethics to humans. For example, the motion to cover the mouth of a mask that has toothed teeth indicates that we must cover up the ugliness. In addition, the sowing scene of rice at the end of the dance also symbolizes sharing behavior of sustenance to others. 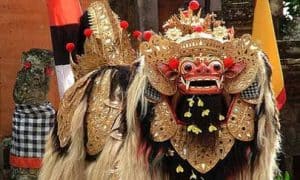 Barong Dance in Bali is a well-known dance. According to some narratives, Barong Dance has been done since the time of Pre-Hindu, with the implementation of dance in a tangible animal with four legs containing magical powers. Topeng Barong itself is said to come from wood taken from places thick with mystical nuances, therefore Barong figure is considered one of the sacred figure for the Balinese Hindu community.

However, in modern times Barong Dance becomes one of tourist attractions that should be witnessed. Barong Dance Performances can be performed with or no play at all. 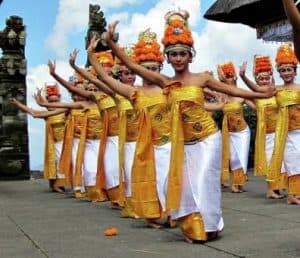 Rejang Dance is a Balinese dance that is danced en masse and sacred so danced by young girls and who are still sacred, even Rejang dance is very often done by a small girl who is six years old. The dancers are led by a dancer who dances at the front. Behind the stalwarts of Rejang dancers lined up dancing while holding a piece of thread carried by the pemangku. The music accompaniment that used is named Semar Pagulingan gamelan.

This dance is also mandatory in stage at Pura to entertain the gods who come down to earth. Sometimes the dancers are unconscious with their bodies and souls that have been entered by the special angel spirits who like to dance in the gods. 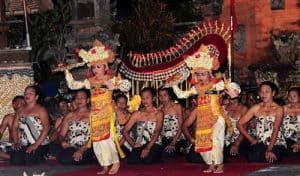 Sanghyang dance is a sacred dance that serves as a complementary ceremony to ward off an outbreak of a disease that is engulfing a village or region. There is one thing that is very interesting in this art. The players will experience a trance at the time of staging.

It is in these circumstances that they dance, sometimes over the coals and then around the village to drive out the plague. Usually the show is performed at night until midnight. There are several kinds of Sanghyang Dance namely Sanghyang Dedari, Sanghyang Dewa, Sanghyang Deling, and others. 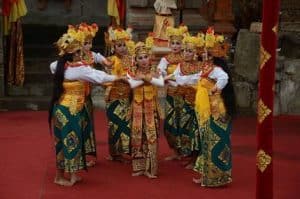 Gambuh is in the form of a total theater because in it there are braided elements of sound art, drama and dance art, fine arts, literary arts, and others. Gambuh staged in the ceremonies of God Yadnya like odalan, Manusa Yadnya ceremony like marriage of noble family, ceremony Pitra Yadnya (Ngaben) and anything else. 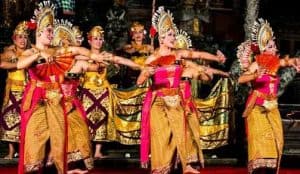 This dance is quite unique and also very popular by the successor of the younger generation in Bali in particular. Janger dance is a dance of Balinese young people who created in the 1930s. Dance with a simple but cheerful and excited movement was performed by 10 paired dancers, namely the group of daughters (janger) and son (kecak).

They dance while singing Janger’s Song in reply. This dance also tells the alignment and loyalty of a woman to her partner and vice versa. janger song janger accompanied by a song and dance kecak give us a message of harmony in married life. 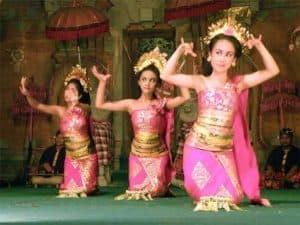 A unique and well-controlled dance created by artist I Nyoman Kaler is a guest-welcoming dance, which is usually a special guest like the kings of old. This dance is performed by female dancers in groups. His moves depict hospitality, respect for guests.

This dance is depicted when the flowers sown by the dancer to the guest who symbolize welcome expression to the guests and love peace with a movement full of warmth, joy, and honor. This dance is not so difficult to master. Every tourist attraction or dance hotels is always used for welcoming local and foreign guests.

Those are the famous dances in Bali. Those dances have already been well known even for the foreign tourist of Bali. Hopefully, the dances are well preserved and many people still could enjoy them in Bali.

17 Famous Holidays in Indonesia for Tourists