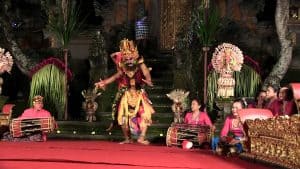 Indonesia is a multicultural country that comes from various sources and is influenced by various cultures outside. Nevertheless, the indigenous culture of Indonesia is actually still sustainable and very good for this nation. Indonesia does have many regional dance arts. From Sabang to Merauke, each region has its own dance. In Bali, there is one of the dance performances routine. One of them is Ramayana Ballet staging which becomes a tourist attraction of Sleman with high attraction for tourists.

Ramayana Ballet is a show that combines dance and drama without dialogue with the theme of Ramayana story. In addition to Prambanan Temple, this ballet is also displayed in Purawisata Yogyakarta and on the island of Bali.

The History of Ramayana Dance

Sendratari prioritizes expression-boosting movements in lieu of dialogue, so it is expected that the delivery of the epic Ramayana can be more easily understood against different cultural backgrounds and audiences. The appearance of Ramayana stories in the form of dance performances is available in various countries such as Cambodia, Srilanka, Thailand, Laos, Malaysia, Philippines, Singapore, Indonesia and India.

However, The Ramayana Ballet in Bali appeared in 1965 at the 5th anniversary of Kokar Bali (now SMK Negeri Sukawati) with I Wayan Beratha performing arts. Since then Kokar Balinese students and ASTI (now ISI) Denpasar students have started to perform Ramayana Ballet which is also accompanied by karawitan and dalang. Bali Arts Festival which started since 1979 started the Ramayana Ballet performance in colossal form, the performance was on open stage Ardha Candra Taman Budaya.

In Bali, the staging Ramayana stories are usually incorporated into the story in kecak dance. Kecak dancers will complete the Ramayana story show in Bali, and of course the nuance will be much different from the ballet held at Prambanan Temple. Just like in the ballet, this kecak dance performance was divided into several scenes.

The division of the scene is uncertain, depending on the group performing. In some scenes, such as when Laksmana gives Shinta a protective circle, this kecak dancer will move in the middle and form a circle that surrounds Shinta. At the Sugriwa scene against Megananda (Putra Ravana) then the kecak dancer will be divided into 2 parts, as Sugriwa troops and Megananda troops.

The movement of  Kecak Dance

Although the movement is quite easy and simple, but the dance performed by tens to thousands of people this will certainly make the dance movement becomes more unique and interesting. Kecak Dance Show can easily be found in some areas in Bali.

Some areas in Bali are often used as performances Kecak dance is Ubud, Gianyar, Tanah Lot, Uluwatu, and Garuda Wisnu Kencana. Not only has a unique movement, Kecak dance is also more interesting because of the sound of “chakra-cak” during the staging took place. The sound came out of the dancers in accompanying dance moves.

The story of Ramayana

The Ramayana Ballet is a beautiful art performance, amazing and hard to match. This show is able to unify the Javanese arts of dance, drama and music in one stage and one momentum to present the Ramayana story, the legendary epic of Walmiki written in Sanskrit. The Ramayana story which is performed on this show is similar to the one carved on Prambanan Temple. As many have said, the Ramayana story carved in the most beautiful Hindu temple is similar to the story in oral tradition in India. The long and tense storyline is summarized in four plays or rounds, Sinta’s abduction, Anoman’s mission to Alengka, the death of Kumbakarna or Rahwana, and Rama-Sinta’s reunion.

In contrast to other types of dances that use music as a companion, kecak dance performance is not accompanied by music rebound at all. The only audible sound comes from the dancers who say the word “cak-cak” in reply. In addition, there was also a clattering sound from the property used by the dancers. The rattling sound is derived from the crank bracelets used on the wrists and dancers’ feet. Therefore, Kecak Dance becomes a very unique dance and dance.

The story begins when King Janaka held a contest to determine the companion of Dewi Shinta (his daughter) who eventually won Rama Wijaya. Followed by Rama’s adventure, Shinta and Rama’s younger brother named Laksmana in Dandaka Forest. In the woods that they meet Rahwana who want to have Shinta because it is considered as the incarnation of Goddess Widowati, a woman who has long sought.

To attract Shinta’s attention, Rahwana transforms a follower named Marica into a Kijang. The effort was successful because Shinta was captivated and asked Rama to chase him. Laksama looking for Rama after a long time never returning while Shinta abandoned and given protection in the form of a magic circle so Rahwana can not kidnap. The protection failed because Shinta was kidnapped after Rahwana transformed into Durna.

At the end of the story, Shinta was recaptured from Ravana by Hanoman, a lively and mighty monkey figure. But when brought back, Rama just did not trust Shinta anymore and think it has been tarnished. To prove the sacredness of self, Shinta asked to burn her body. The sanctity of Shinta is proved to be that her body is not burnt, but it is more beautiful. Rama finally accepted him back as a wife. The Story is pretty long right?

Those are the short explanation of Ramayana dance in Bali. Although it has a sacred value, but kecak dance can be used as media to preserve the art and culture of the people of Bali. In the show, kecak dance is performed by bringing the story of wayang of Ramayana. With the display of Kecak dance performances, more and more people are familiar with the story of Ramayana. This dance is presented with the aim to provide entertainment to all Indonesian people and the world. Therefore, Kecak dance is often displayed on stage staging to entertain tourists visiting the island of Bali.

The Brief History of Surabaya, Indonesia